The Alhambra opens a new Visitor Attention Point and Tourist Information Office for the city of Granada in the Calle Real in the very heart of the Monument. 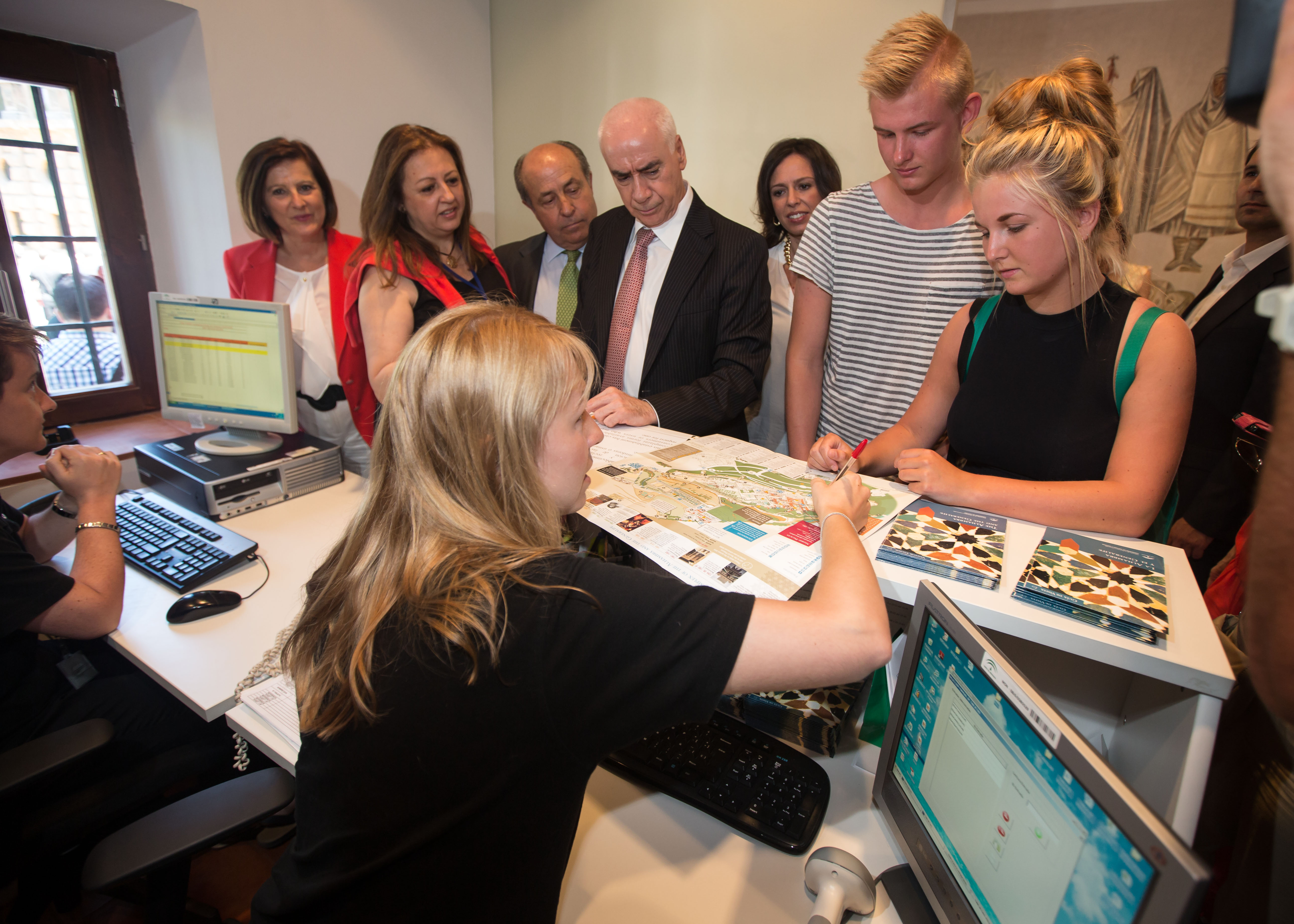 As of today the Alhambra has a new Visitor Attention Point, which also provides tourist information about the city of Granada. This morning the Minister of Culture and Sport of the Regional Government of Andalusia, Luciano Alonso, inaugurated the Casa de la Estafeta, in the Calle Real de la Alhambra in the very heart of the Monument, which after renovation will now become a reference point for millions of visitors. The Council of the Alhambra and Generalife has provided a space inside this building free of charge to Granada City Council, so that they can offer tourist information about the city to all those requesting it.
With this initiative, Luciano Alonso claimed that “the Alhambra will provide even better specialized attention to its visitors, in that in addition to offering them information, the staff will also be able to identify in situ any problems they may have and solve them. This project brings added quality to the public service provided by the Monument, as befits a 21st Century institution”.
The Mayor of Granada, José Torres Hurtado, also attended the inauguration ceremony together with numerous personalities from the world of politics, culture and tourism, including the Delegate of the Regional Government of Andalusia in Granada, María José López, the Delegate for Education of the Regional Government of Andalusia in Granada, Ana Gámez, and the Councillor for Tourism of Granada City Council, Rocío Díaz.
For her part, the Director of the Council of the Alhambra and Generalife, María del Mar Villafranca, emphasized that this project, which is part of the Master Plan for the Monument (strategic line 2), “will be a step forward in the updating of the services that the Alhambra offers its visitors, so enabling them to contribute to improving the way we manage the monument. We want to hear their suggestions, solve any problems they may have and clear up all their doubts. We want them to enjoy the unique heritage experience offered by a place like this”.
The Council of the Alhambra and Generalife has selected a qualified, specialized team of 10 people who will perform their duties in different languages (English, French, Italian, German, Polish and Sign Language for people with hearing difficulties) and will attend the public during the same opening hours as the Monument, including during the night-time visits. The team will be working at two strategic points: firstly at the Pavilion at the Entrance to the Generalife next to the ticket office, where they will provide direct attention to organized groups of tourists and to the professional heritage and other guides, and secondly at the Casa de la Estafeta itself, to which the staff who previously attended the public in the building situated in the Callejón del Guindo have now moved. From January to May 2013, 25,071 people received information at these two attention points.
The building work to renovate the Casa de la Estafeta took over a year. The architect responsible for the work was Francisco Navarro and technical management was provided by the Heritage Conservation Department of the Alhambra and Generalife. During the work two frescoes by the painter Manuel Maldonado (1915-1984) were uncovered. These paintings depict figures and scenes from the Morisco period that had remained hidden until now.

The Casa de la Estafeta is in the Calle Real de la Alhambra adjoining the Plaza de los Carros and opposite the Palace of Charles V. Until 1928 it was used as a residence for landscape painters. Its use as a post office (hence its current name “Casa de la Estafeta” – post office in Spanish) dates back to 1960 when the Commission of 23rd November informed that a Post Office was to be established there by Order of the Director-General of Post and Telecommunications. It has also been used as a Red Cross station, in 1987, and as the Alhambra Bookshop from 1989 to 2010. It has two letter-boxes from its days as a post office which are of great historical value. They come in the form of two lions’ heads in green bronze, which the intellectual Antonio Gallego Morell suggested should be installed here and which were originally in the old post office in the Gran Vía in Granada.