The Alhambra once more most visited site in Spain in 2011 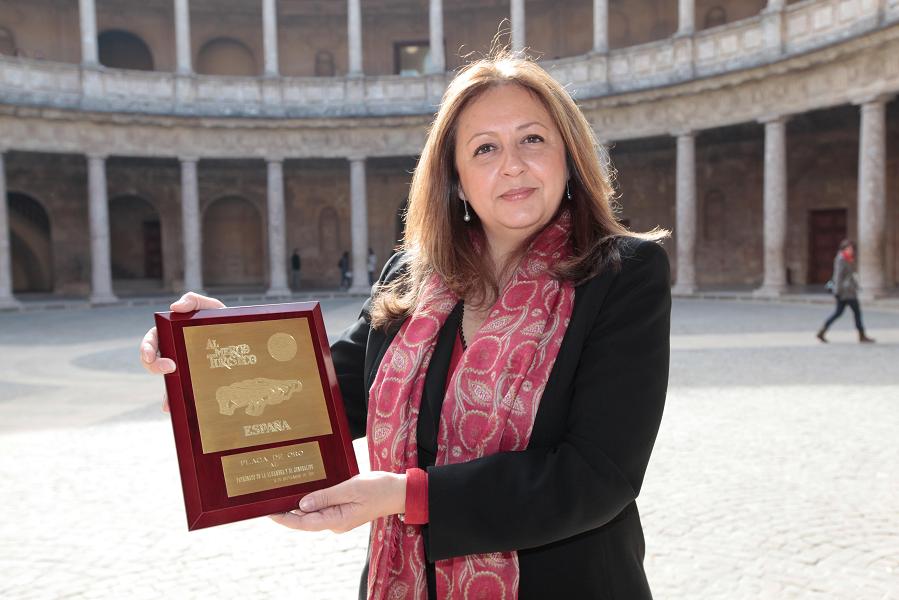 The Alhambra and Generalife complex was once more the most-visited monumental site in Spain, an increase of 6.47% bringing it over its previous record (2,241,683 visitors in 2000) and up to 2,310,764 persons. These “excellent results” are complemented by those for the site’s educational and cultural activities, demanded by 4,809,201 people in 2011. These data on tourist, educational and cultural activity at the site were presented this morning by María del Mar Villafranca, general director of Patronato de la Alhambra y Generalife (PAG), María del Mar Villafranca, for whom the Monument “continues to be a model of sustainable management”.
Villafranca pointed out that the Monument continues to be the principal tourist attraction of Granada and Andalusia, retaining its leadership at national level. The study, drawn up by the PAG Sustainability Laboratory, also confirmed the growth of cultural demand for the Alhambra’s museum, Alhambra’s museum, accounting for 43.76% of all visits.
The report outlines that tourist, educational and cultural visits accounted for 2,310,764 visits, an increase of 6.47% over 2010; followed by exhibitions, with 2,133,454 visitors; the Alhambra Museum, with 171,902, and the Museum of Fine Arts, with 193.081. Also in 2011, 1,807,322 people, or 78.21% of the 2,310,764 visitors to the Monument, stayed in Granada overnight.
Additionally, there were another 72,820 visitors to cultural events, not counted in overall visitor numbers. These events included the International Festival of Music and Dance, held at the Alhambra, with 20,406 visitors; the World Poem, with 2600; the International Day for Monuments and Sites, with 7689; Lorca and Granada in the Generalife Gardens, with 36,614, in addition to the 5511 persons who took part in a range of cultural activities held at the Site.
Villafranca attributed the growth in cultural visitor numbers principally to a series of major exhibitions, which, she believes, have reinforced the attraction of the Monument. These Monument would include Lions, the restoration of a symbol, which received 1,635,394 visitors; Matisse and the Alhambra, which received 94,660; M.C. Escher: Infinite Universes (235,261); Owen Jones and the Alhambra, visited by 60,839 persons between 21 October and 31 December 2011; and the 2808 persons who visited the newly restored Moor’s Chair between 24 September and 31 December.
Breaking the figures down, the report reveals that 22 September was the busiest day at the Monument, when 100% of the tickets (9248) were sold. The least busy day was 13 December, when the site received only 1965 visits. The busiest month was May (250,363) and the least busy was January (100,036). The most popular ticket type was the daily visit, taken out by 1,986,054 persons, an increase of 4.85% over 2010; followed by the Gardens Tour (193,416 visitors); the Evening Visit (80,801), the Tourist Pass (20,697), the Monument (5131) and temporary access card (11,742). And, although all types of visit increased over 2010, Villafranca noted the “outstanding” increase in the popularity of the evening visits to the Generalife Palace and Gardens, with 11,707 visitors in 2011, up 295.77% on 2010.
The Monument also proved popular with tourists. In this regard, the study points out that the perimeter area and free spaces were visited by 308,722 persons, of whom 171,360 were from Granada, an increase of 4.12% on 2010; neighbours of Granada town and province were among the most assiduous visitors to the monument, contributing 609,063 visitors.
With regard to profiling, the report reveals that independent visitors formed the majority, with 60.03%, followed by organised group tours, who accounted for 34.68%, and cultural-institutional visits (5.28%).
Unlike in 2010, in 2011 the majority of visitors to the Site were European Union residents, who accounted for 40.62%, with particularly good numbers in independent tourists from France and Italy and group tours from Germany and the UK; Spaniards, on the other hand, dropped by 8.68%. From outside the EU, US visitors were the majority, both as independent tourists and in groups.
96,248 schoolchildren who took part on the Children and the Monument, of whom 51.61% were from Granada town and province, followed by 39.95% from the rest of Andalusia and 8.44% from the rest of Spain. Huelva and Jaén provinces contributed the greatest numbers of students to the rest of Andalusia segment, while Elche, Alicante and Lanzarote stood out in the rest of Spain segment.
The report on tourist, educational and cultural activity at the Alhambra and Generalife site dedicates a special section to visitor profiling. Most tourists visiting the Alhambra are European, aged 30 to 44, have third-level studies and hold professional jobs. Most are happy or very happy with their visit to the Alhambra, particularly with the conservation status of the buildings, the garden maintenance and the cleanliness of the site.
The report also confirms the consolidation of the Serviticket advance booking system, which was used by 69.43% of visitors, followed by the Alhambra ticket sales system (29.67%) and the Tourist Pass (0.90%).
New technologies have contributed heavily to awareness of the Monument. In 2011, the PAG website (Alhambra ticket) received 1,067,000 visits, 40% more than 2010, with an average viewing time of 14 minutes; a record of 19 minutes was reached in August. The profile of visitors to the Alhambra website is aged 35 to 44, predominantly women, with third-level education and in professional employment. The number of visitors in the 18-24 and 25-34 year segments also grew, to close to the internet average. Visitors to the site clicked in from 169 countries, though predominantly from Spain. With regard to foreign web visitors, the most numerous were from the USA (5.03%), followed by Germany (3.27%), Italy (3.14%) and France (3.08%).
Another significant finding was that of users of the Site’s Bluetooth system, with 29,038 visitors downloading the app in 2011.