The Alhambra of Granada opens its doors to the film crew of the TVE series ‘Carlos, Rey Emperador’ 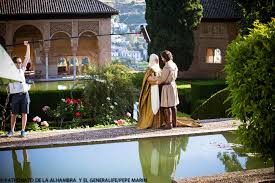 Granada, the city in which it is said that the great love between Charles Hapsburg and Isabel of Portugal was forged, will be welcoming the team making a new series entitled ‘Carlos, Rey Emperador’ (Charles, King Emperor), the new piece of historical fiction by Televisión Española in collaboration with Diagonal TV. The gates of the Alhambra will be opening again for the filming of a TVE series as happened with ‘Isabel’, which broke new ground as the first series to be filmed inside the Alhambra in 25 years. On this occasion about 10 actors will be coming to the city, including the stars of the series, Álvaro Cervantes and Blanca Suárez.
The cast will also include Marina Salas, Ramón Barea, Félix Gómez, Alberto San Juan, Juanjo Puigcorbé, Víctor Clavijo and Laia Costa, who will be coming to Granada to shoot various scenes of ‘Carlos, Rey Emperador’, the series directed by Oriol Ferrer with a script by José Luis Martín. They will be recreating above all the months in which Carlos and Isabel lived in the Alhambra during their honeymoon, months in which they conceived the future Emperor Philip II and set out on what was to be a happy marriage.
Over a hundred extras will be taking part in the filming in the Alhambra and the streets of Granada. Filming will be possible thanks to collaboration between the Council of the Alhambra and Generalife and Granada City Council.
The wedding and honeymoon of Charles and Isabel
Granada is not only the city where the King and Queen chose to spend their honeymoon, it is also the place where they conceived the future Emperor Philip II and where they enjoyed the first moments of their happy marriage. The wedding of Charles and Isabel which in fact took place in Seville will also be filmed in Granada and the scenes of the marriage will be filmed in the Qubba of the royal palace of the Almanxarra, a jewel of Arabic architecture in the centre of the city of Granada.
In order to capture this moment in history and the events that took place, the following actors will be coming to Granada: Álvaro Cervantes (Charles Hapsburg), Blanca Suárez (Isabel of Portugal), Marina Salas (Leonor Hapsburg, Charles’ elder sister), Ramón Barea (Fadrique de Alba, one of Charles’ advisers), Félix Gómez (Fernando Álvarez de Toledo, the grandson of Fadrique de Alba), Alberto San Juan (Charles of Borbón, the cousin of Francis I), Juanjo Puigcorbé (the veteran politician Gattinara), Víctor Clavijo (Francisco de Borja) and Laia Costa (Maria of Austria).
‘Carlos, Rey Emperador’ is TVE’s new historical fiction which takes up the story where one of the most popular series in recent years, ‘Isabel’, left off. The new series will tell the story of the life of Charles Hapsburg, the heir to the Holy Roman Empire, from his arrival in Spain to his increasing maturity as a statesman, showing how he became stronger when he responded to the threats around him with the help of his advisers, who offered both wise and mistaken counsel.
Directed by Oriol Ferrer, one of the directors of ‘Isabel’, it will also have Salvador García and Jorge Torregrosa as directors of certain chapters. The script is by José Luis Martín, the script coordinator for the second and third season of Isabel and the Art Director will be Josep Rosell, with David Azcano as Director of Photography. Pepe Reyes will once again be in charge of costumes.