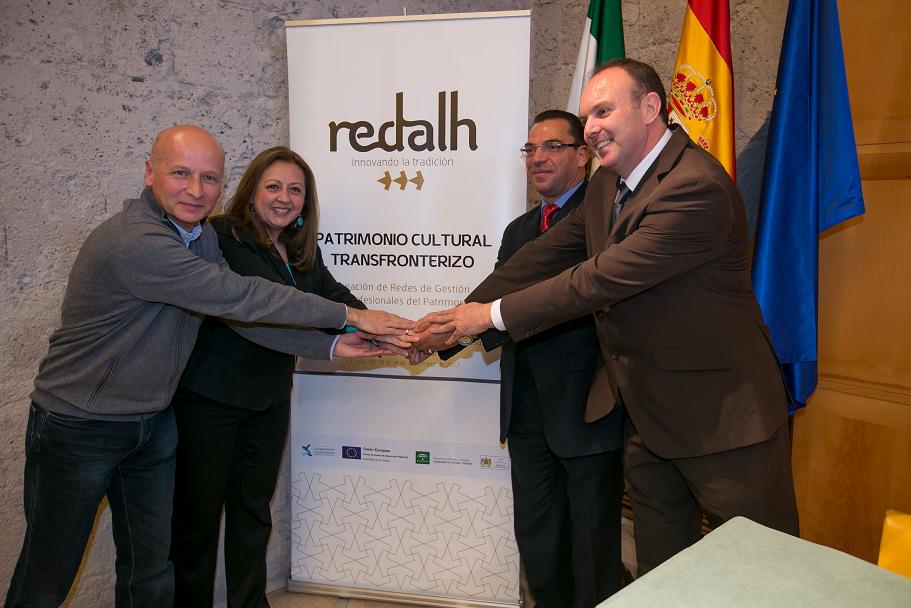 The Alhambra and Morocco are united in their Project to innovate in the heritage tradition...

The Alhambra and Morocco are united in their Project to innovate in the heritage tradition. This is the Redhalh Project (2012-2013), which aims to create networks of professional management to recover, preserve and give value to the common legacy of handcraft heritage of the Andalus and the Mahgreb. This project is endorsed by the European Union, which has granted funds of over 350,000 Euros from the ERDF (Regional Development Funds), within the POCTEFEX (Programme of Spain-External Frontiers Cooperation).
This morning in the Palace of Charles V, María del Mar Villafranca, director-general of the Patronato de la Alhambra y Generalife, and Francisco Lamolda, architect-curator of the Monument, who is also responsible for the Project, have presented the strategic plans of the Redalh. Cross-border Cultural Heritage: Creation of Network of Management Professionals of Heritage, along with the director of culture of the Region of Tangiers-Tetouan, Mohamed Ettakkal, and the regional inspector of Historic Monuments and Sites of Morocco, Mehdi Zouak.
According to María del Mar Villafranca, this is an enterprise that “will establish a dialogue and exchange of knowledge between professionals in the heritage of the Alhambra and Morocco. We are going to put at the disposal of the project scientific and artisan expertise of our researchers and craft technicians in order to promote the training of young and skilled workers to safeguard and protect this cultural heritage. We would like this project to serve as a platform for employment and strategy of cooperation between both territories”.
The Moroccan delegation has explained, for its part, that “we have resources of raw materials and artisans that still, in the 21st century, work in the traditional manner in trades related to Heritage and to work techniques that are very similar to those used in the Nasrid period for the building of the Alhambra”.
With the purpose of finding common similarities regarding materials and craft techniques to those used in Nasrid architectural constructions in the province of Granada and Marinids in the region of Tetouan-Tangiers, the Project will be divided into several stages. These will be developed until December, 2013, and will be focused on scientific research on the decorative use and artisan techniques of wood, ceramics and gypsum; the innovation of restoration workshops and specialized preparation through the communication of knowledge.
The grand finale of the project will be a travelling exhibition in the Alhambra, Tetouan and Tangiers, containing pieces from the research carried out. To consolidate their work on line, Redalh will have its own website www.redalh.eu, and this will widen its contents as the work progresses.
After the first research stage in Granada – carried out by the Andalusian delegation in 30 workshops in the province, this resulted in the production of a detailed inventory of the traditional craftsmanship in ceramics, gypsum and wood. This week the Moroccan and Spanish representatives will take part in a seminar on material resources and artisan techniques in the Alhambra.
Therefore, until next Friday, visits are foreseen to various points of interest, with the idea of getting to know the main methods of extraction, processing and use of the materials in the area of Granada.
Among these visits, there are routes to the Beansi Plaster Workshop (Atarfe), Los Arrayanes Arab ceramic workshop and structural woodwork in the Cooperative Los Tres Juanes (Atarfe); the centres of exploitation and gypsum kilns (Castilléjar), the ceramics and popular Guadix potting workshop in Gabarrón (Guadix); Castillo Siles ceramics workshop (Víznar); Manuel Torres Ceramics, (Alhendín); Viceira Muñoz ceramic workshop (Las Gabias) and the Fajalauza ceramic workshop in Granada. It will also be possible to learn about the artisan techniques used in the construction of the Nasrid monument, by visits to the restoration workshops of the Patronato de la Alhambra y Generalife and to the training hall.
The Trans-frontier Projects only allow for collaboration between Mediterranean countries. Redalh operates in the Moroccan region of Tetouan-Tangiers and in the province of Granada with the Patronato de la Alhambra y Generalife.