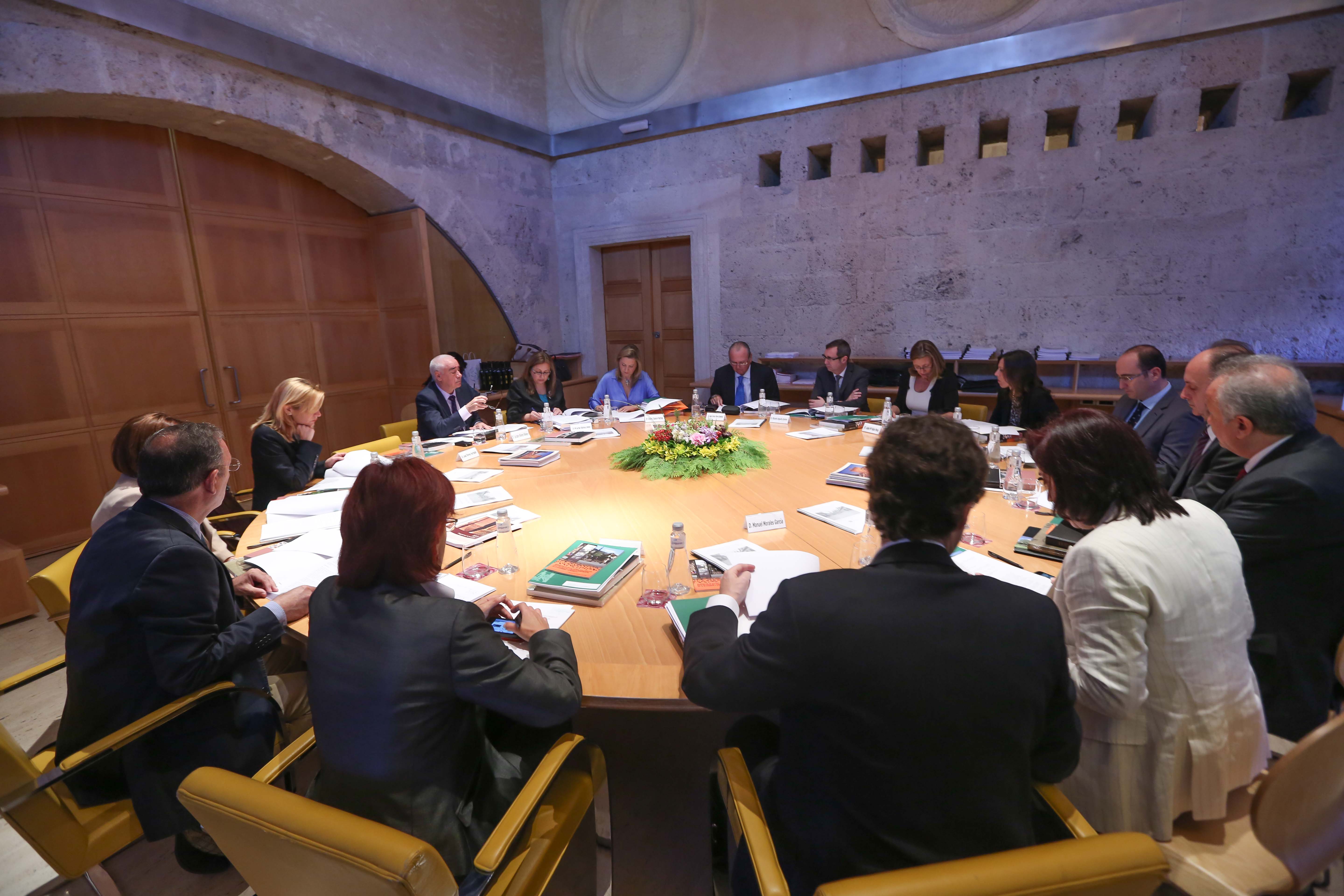 This morning the Minister for Education, Culture and Sport of the Regional Government of Andalusia, Luciano Alonso, chaired the annual meeting of the Full Board of the Council of the Alhambra and Generalife, which was held in the Palace of Charles V...

This morning the Minister for Education, Culture and Sport of the Regional Government of Andalusia, Luciano Alonso, chaired the annual meeting of the Full Board of the Council of the Alhambra and Generalife, which was held in the Palace of Charles V. At the meeting the Board approved the annual report and accounts for 2013, and the works plan and budget for 2014, set at 26,917,353€, an increase of 5.05% on 2013. The meeting began with the announcement that the Alhambra had been awarded the Hispania Nostra Prize for the sign system it has installed along the route of the public visit.
The main projects that the Council of the Alhambra and Generalife will be undertaking this year include the beginning of the academic activities of the School of the Alhambra, the drafting of the project for the construction of the Atrium of the Alhambra and the project for the refitting of various houses in the Calle Real which will be turned into a cafeteria.
There are also plans in 2014 to begin Phase II of the Alhambra Archaeology Plan, drawn up by the research group led by the Professor of Mediaeval History at the University of Granada, Antonio Malpica, a joint project with the University.
Among other agenda items, the Minister for Culture and Sport confirmed the consolidation of new types of visit which provide “added value” to what the Monument has to offer. These include the ‘Alhambra especial’, ‘Alhambra Experiencias’ and ‘Alhambra otra mirada’ visits. The number of people opting for these new kinds of visit has increased considerably in 2013, something that the Minister expects will also occur with the launching of another new visit entitled ‘Alhambra Dobla de Oro’ (Alhambra Golden Doubloon), which will combine visits to the Monument with visits to other historical monuments in the Albaicín quarter and the city of Granada, such as the Palace of Dar al-Horra, the Horno de Oro Moorish House, the Bañuelo Arabic Baths and the Corral del Carbón, all run by the Council of the Alhambra and Generalife.
The members of the Board were also informed about continued cooperation and sponsorship agreements with a wide range of professional associations and public and private institutions. These include the consolidation of European funds obtained in public invitations to tender, such as the cross-border cooperation project Redalh for the recovery of traditional crafts and trades and the participation of the Council of the Alhambra as a beneficiary of the technological innovation project known as Tag Cloud, which is being led by the Polytechnic University of Madrid together with other international entities and the RenEu project for the promotion of the “Routes of the Renaissance” led by the Toscana region in Italy.
The meeting also mentioned and thanked various sponsor institutions: “la Caixa” for its sponsorship of the project for the removal of physical barriers in the Palace of Charles V via the installation of a lift linking the Museum of the Alhambra with the upper floor of the Palace of Charles V; the WFM Foundation who are sponsoring the restoration of the Prayer-Hall of the Palace of the Partal and the Cervezas Alhambra brewery, who for the next two years will be sponsoring the publication of the map/visit guide to the Alhambra group of monuments.
The fact that the Regional Government of Andalusia (in the form of the Council of the Alhambra) is now a member of the management bodies of the Rodríguez-Acosta Foundation was confirmed by the Regional Minister for Culture and Sport, Luciano Alonso, who announced that the activities planned for 2014 include “the organization and planning of cultural and research activities and the support and maintenance of this space, which also safeguards the legacy of the Gómez Moreno family, for its opening to the public as one of the combined visits offered by the Alhambra in collaboration with other institutions in the city”.
The entry of the Regional Government into the Rodríguez-Acosta Foundation also has important material consequences in the form of a grant, which for 2014 amounts to 341,000 euros. This amount comes out of the annual budget of the Council of the Alhambra and Generalife, which also provides other material and human resources.
The Alhambra’s determination to widen its range of cultural activities was another of the matters most discussed during the meeting. Various events have been announced for 2014. These include Ángel Barrios. Creatividad en la Alhambra, scheduled for June; Universo Morente, a tribute to the flamenco singer from Granada, Enrique Morente, Variaciones sobre el Jardín Japonés, which will be installed in the Rodríguez-Acosta Foundation, and José Guerrero. The Presence of Black. 1950-1966, which will be held in October and will be one of the most important activities (organized jointly with the Provincial Council of Granada) during the events planned to celebrate the centenary of the birth of the well-known local artist.
The Board meeting also approved the continuation of the project for the cataloguing of the Museum of the Alhambra into the DOMUS integrated system; the completion of building works on the Alhambra document depository for the installation of the Library and Archives, in accordance with the specific rules governing the depositories belonging to the Regional Government of Andalusia; and the continuation of Phase III of the project to record the Oral Memory and the Audiovisual Memory of the Alhambra.
For more information, please visit www.alhambra-patronato.es