The Alhambra has enhanced its art collection with around twenty pieces valued at 250,300 euros 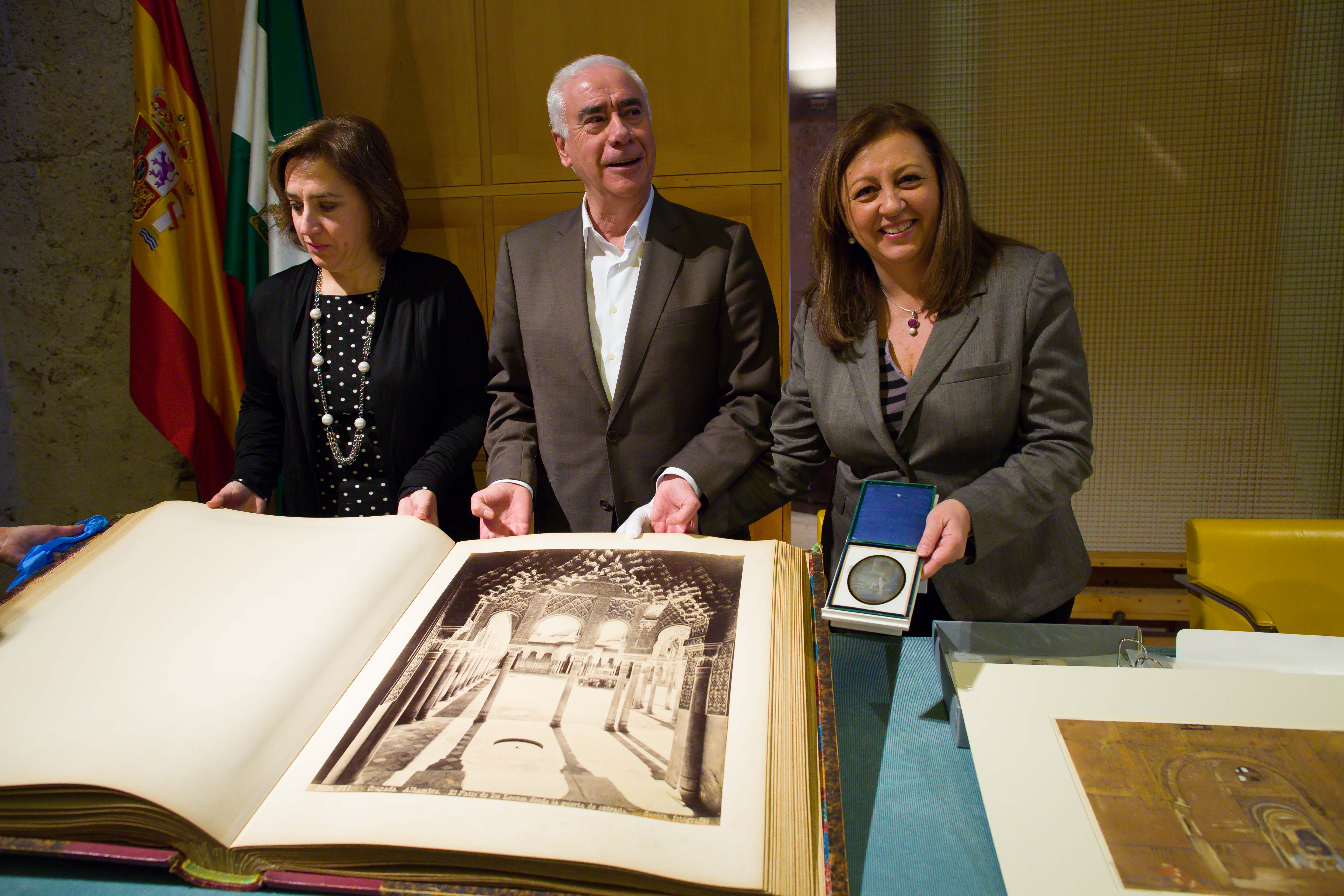 Luciano Alonso, the Regional Minister of Education, Culture and Sport, presents a report on the latest acquisitions made by the Council of the Alhambra
The Alhambra’s art collection is growing and “will continue to grow” according to Luciano Alonso, the Regional Minister of Education, Culture and Sport, speaking at the presentation of a report on the Acquisitions made by the Council of the Alhambra and Generalife in 2013 and 2014, comprising almost twenty pieces that cost a total of 250,300.26€ and were bought either at auctions or directly from their private owners.
In his speech, Alonso referred to the commitment and the “obligation of public institutions to acquire heritage assets”; while María del Mar Villafranca, the Director of the Council of the Alhambra stressed the importance of “promoting and encouraging cultural initiatives which enhance the knowledge and the dissemination of the Alhambra, its aesthetic values and its history”.
Together with these new acquisitions the Alhambra has also been fortunate to receive donations from the painter Manuel Ruiz Ruiz of a wide array (a total of 273) of his artistic creations, including lithographs, engravings and drawings, and from Adolfo Vallés, the son of the composer Antonio Vallés, who wrote the lyrics for the bolero, A la Alhambra, who has given the Council of the Alhambra a libretto with scores published in 1955. Also during this two-year period (2013-14), the Town Council of Otura (Granada) deposited at the Museum of the Alhambra a capital made out of serpentine marble from a column dating from the Almohad period.
The star pieces that have been added to the Alhambra’s art collection over the last two years include the painting by Fernando Marín (1737-1818) Vista de Granada desde el Camino del Avellano (View of Granada from the Path to the Hazel-Tree); two paintings from the Alhambra series by Soledad Sevilla (Valencia, 1944), entitled Sabrás de mi ser si mi hermosura miras (1984) and La oscura esquina que tiznó la sombra (1984); the book about the Farfán Tower and the set of drawings by Mariano Fortuny (1984-1874); two daguerreotypes acquired from the Antiq-photo Gallery in Paris, one entitled Portrait in the Lindaraja garden (1847), and the other a stereoscopic image called Alhambra Court at the Crystal Palace in London (1854), and finally a small octagonal inlay box from the Nasrid period made with bronze fittings, that dates from the end of the 15th Century, acquired at an auction in Madrid in which the Ministry of Education, Culture and Sport (acting in name of the Council of the Alhambra) exercised its option to buy. Other acquisitions include a drawing by Fritz Bamberger (1818-1873) entitled View of the Alhambra from the centre of Granada (1868), a watercolour by John Frederick Lewis (1805-1876) entitled Entrance to the Hall of the Two Sisters and a book of photographs by Rafael Garzón from his Album of Journeys around Spain, which dates from the end of the 19th Century.
With these acquisitions, the Ministry has complied with the provisions of Law 16/1985, of 25th June 1985, on Spanish Historic Heritage (Art. 1.1) and Law 14/2007, of 26th November 2007, on the Historic Heritage of Andalusia (Art. 1.1) which refers to the “protection, enhancement and transmission of our heritage to future generations”.