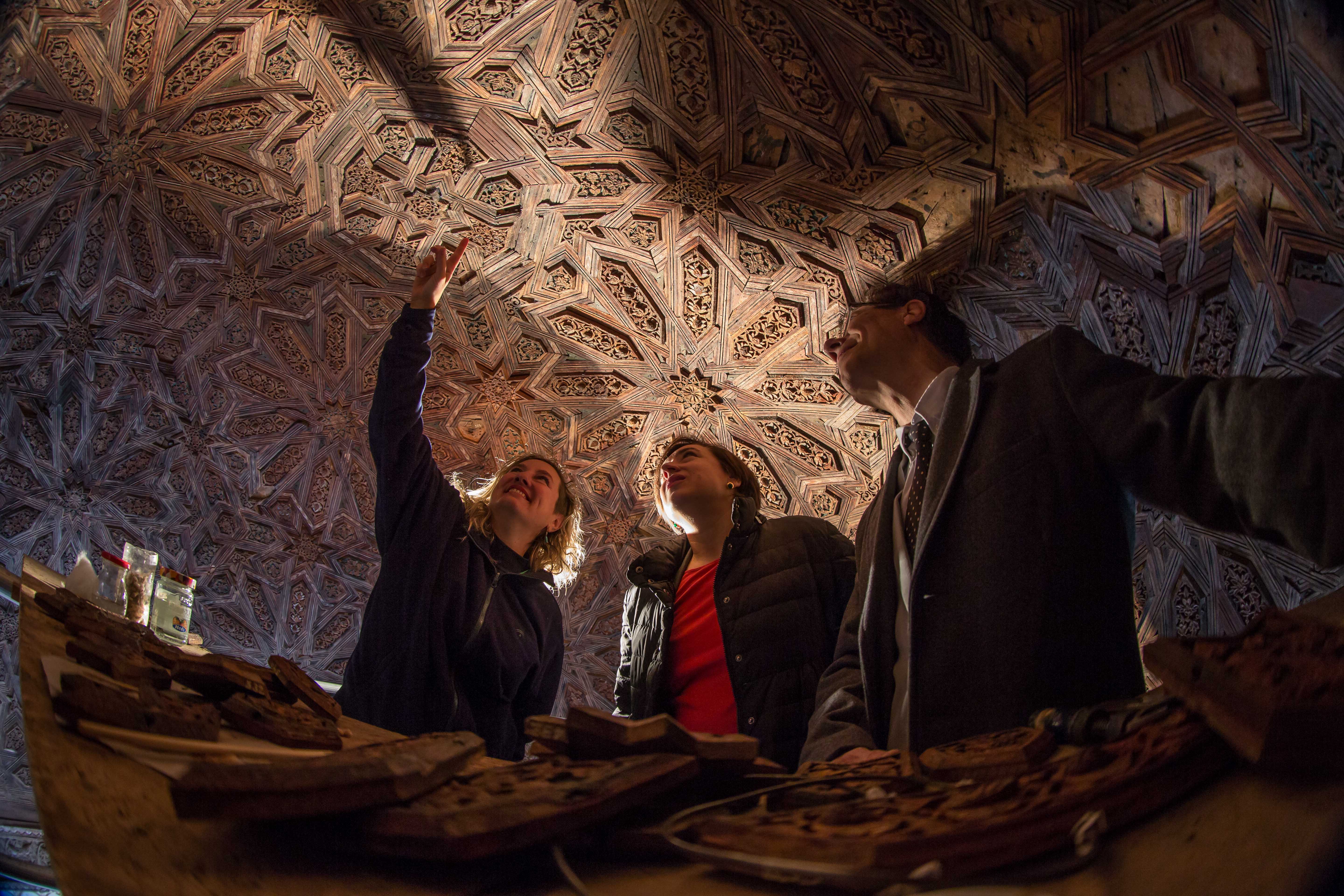 The Alhambra is full of surprises. Work has only recently begun to restore the beams supporting the roof of the West Pavilion of the Court of the Lions and new findings have already been made

The Alhambra is full of surprises. Work has only recently begun to restore the beams supporting the roof of the West Pavilion of the Court of the Lions and new findings have already been made. Restorers from the Alhambra’s Conservation Department have just uncovered new drawings from the Nasrid era that have been hidden behind some of the pieces of the ancient ceiling, which dates from 1380 (14th Century) and has an unusual semi-spherical shape.
This morning the Delegate of the Regional Government of Andalusia in Granada, Sandra García, and the Director of the Council of the Alhambra and Generalife, Reynaldo Fernández Manzano, visited the site where the staff from the Alhambra’s Painted Wood Restoration Workshop have been doing restoration work since 9th October. The team is made up of Mª José Domene, Emilia López and Lola Urbano. “The Alhambra never ceases to surprise us” said Fernández Manzano who also announced that the “restoration work is due to take twelve months”.
Plant motifs, geometric shapes, silhouettes of animals and ornamental designs are just some of the drawings that have come to light during the restoration work “which is revealing how the Nasrid craftsmen worked and the decorative techniques they used”, the restorers explained.
During the time the architect Leopoldo Torres Balbás (Madrid, 1888-Madrid, 1960) worked as the Conservator of the Monument from 1923 to 1936, some restoration was done on one of the areas of this ceiling, but this is the first time that the ceiling has been completely restored since the fourteenth century.
This work will involve making graphic records of the whole process together with analytical and historical studies of the different pigments used in the pieces, cataloguing the fragments, detailed plans of the latticework, planks and ceiling work; analysis of the construction systems, taking down and restoration of cracked or poorly conserved pieces, repainting in full colour, followed by final protection work.
The ceiling of the West Pavilion of the Court of the Lions has a diameter of 3.3 metres. It is made up of 669 zafates or long planks, organized geometrically into wheels with stars. All the decoration centres around an octagon at the top, with carefully carved, painted pieces.
Restoration of the plasterwork in the Gallery of the Hall of Kings
The Alhambra’s Plasterwork Conservation Department is also working in the Gallery of the Hall of Kings where in the coming weeks it will be finishing cleaning work on the polychrome on the plasterwork.
“This is the first time this space has been restored with a scientific approach, in accordance with international restoration criteria” assured Ramón Rubio, head of the Alhambra’s Plasterwork Conservation Department who also explained the “excellent results” obtained with the Mortero Alhambra (Alhambra Mortar), a conglomerate with fluorescent properties that are only visible with ultraviolet light radiation, which allows us to restore monuments or artworks without the changes being visible to the naked eye. This material was invented and patented by the Alhambra’s plasterwork restoration team.