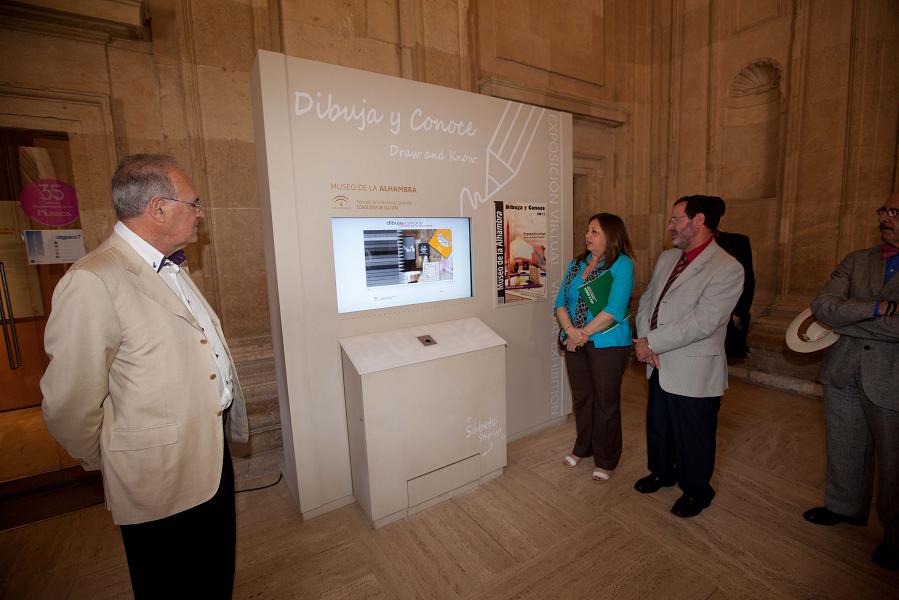 A day to celebrate at the Museum of the Alhambra. To celebrate International Museum Day, 18 May, Patronato de la Alhambra y Generalife has organised a series of activities in the Palace of Carlos V, including temporary exhibitions, guided tours and thematic tours, offering the public the chance to approach, understand and evaluate the rich heritage held by the Museum of the Alhambra.
Patronato de la Alhambra y Generalife general director María del Mar Villafranca visited the Museum of the Alhambra this morning, along with a group of tourists, to inaugurate the temporary exhibition Bronzes of the Spanish Umayyad Caliphate, organised by Patronato de la Alhambra y Generalife in conjunction with the Carlos Ballesta López Foundation, represented by its founder, Carlos Ballesta López. The exhibition consists of two bronze stands in the form of lion’s paws with heads from the private collection of the Carlos Ballesta Foundation, three from Granada’s Museum of Archaeology and another three from the Museum of the Alhambra. All are from a similar timeframe, originating in the post-caliphate period, around the 10th century.

New technologies are another star of International Museum Day at the Alhambra, to coincide with this year’s theme Museums in a changing world. New challenges, new inspirations. Accordingly, Granada’s twitterers and bloggers have been invited to visit the Museum of the Alhambra from 7.00 pm onwards today, to combine the internet environment with the field of culture. Guests will enjoy the collection of Hispano-Islamic art, come into contact with PAG social and communication media and visit the museum (website www.facebook.com/museoalhambra, twitter @museoalhambra).
Exhibitions
Visitors to the Museum of the Alhambra will also be able to see the new mediaeval coins acquired by Patronato de la Alhambra y Generalife in recent years and which are to be definitively incorporated into the permanent exhibition; the coins cover the times from Yussuf I to the Catholic Monarchs.

As is now traditional, drawings by almost 1500 schoolchildren from throughout Andalusia who partook in this year’s edition of the Draw and Learn competition at the Museum will be shown in the lobby of the Palace of Carlos V, in a virtual exhibit which can also be seen on the PAG website (Palace of Carlos V). The video dedicated to the “animated museum” takes a close look at the values contributed by this activity through the use of new technologies.

Another new feature this year is the extension of the Museum of the Alhambra opening hours. Since Wednesday 16 May, the museum now opens at 8.30 am and remains open until 8.00 pm, Wednesday through Saturday. The museum will also be participating in European Museum Night, on 19 May, scheduling evening tours from 9.00 pm to 11.30 pm.

Educational activities offered include tours guided by the museum’s 16 volunteer guides from today until Sunday 20 May, running from 10.00 am to 1.00 pm, as well as the talk on Saturday 19 May as part of May’s edition of the Piece of the Month programme, which this month takes a look at the foundational stone of the maristan of Muhammad V. This activity, free of charge, commences at 12 noon, and involves expert Mariana Kalaitzidou giving a detailed analysis of this singular piece of Nasrid art, currently on show in room IV of the museum.

The Museum of the Alhambra is also taking part in the Take a Smile campaign (#takeasmile), by means of which Spanish museums will celebrate International Museum Day. Take a smile is a viral social marketing campaign, aimed at focussing attention on museums in a new, more intimate and more friendly approach. The theme is How can museums make us smile? And the public will be invited to use the social networks to write what a museum has to do to make them smile.

Moreover, the Andalusian Ministry for Culture, through the Granada Museum of Fine Art, has organised two complementary activities to celebrate International Museum Day on 18 May. The first, under the title of The guest piece, involves the exhibition of a work on loan from a public or private collection. In this case, the piece is by Gómez-Moreno, a portrait of his son at the age of three, and will be shown as part of an exchange of works with the Provincial Council.

As part of the second programme of the Museum of Fine Arts, Rotating pieces, the permanent exhibition is renewed with pieces from the institution’s collection normally kept in storage.  Thus, rooms V and VI will host works by Cayetano Vallcorba, John Frederick Lewis, Isidoro Marín, Thomas Francis and Santiago Rusiñol. These are in addition to the guided tours to the store houses and restoration workshops, held throughout the morning.

In 1977 the International Council for Museums (ICOM) created International Museum Day to raise public awareness regarding the role of these cultural spaces in the development of society. Since then, the event, this year celebrating its 35th anniversary, has grown in popularity.

Museum of the Alhambra