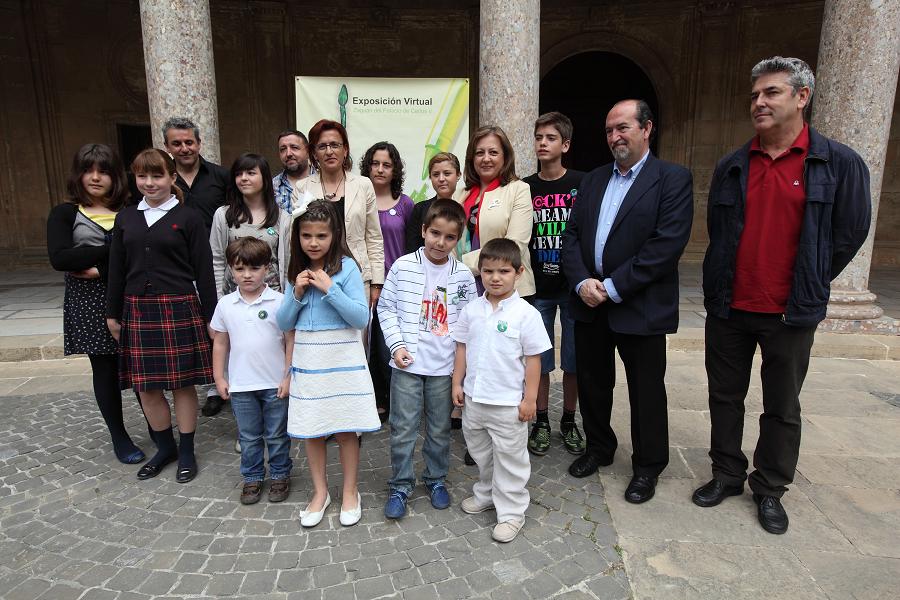 Prizes were awarded by the director of the Patronato de la Alhambra y Generalife (PAG) and the delegate for Education, in a competition with some 3500 entrants

To mark International Museum Day, which this year has as its motto Museums and Memory, the PAG has organised an intense schedule of activities, including exhibitions, open days and the prize-giving ceremony of the 9th edition of the Dibuja y conoce en el museo  children’s art competition.
María del Mar Villafranca Jiménez, general director of the Patronato de la Alhambra y Generalife, and Ana Gámez, regional government delegate for Education, both took part in the activities, which began with a visit to the Nasrid Doubloons exhibition in Room I of the Museum of the Alhambra. These gold coins dating to the time of sultan Yusuf I (1333-1354) and recently acquired by the PAG. The dinars minted by the Nasrid sultans were known as “doubloons” or doblas to their Christian contemporaries, and certain exceptional pieces have survived to this day. Doubloons, such as these four issued by Yusuf I, constituted the basis of the Nasrid gold coinage system. Yusuf I gold doubloons were minted following the Almohad pattern, sharing a common formal and symbolic feature – the square combined with the circle. The inscription on the reverse of each of these four coins, as in the walls of the Alhambra, repeats the dynastic motto of the Nasrid sultanate, “There is no conqueror but God” and the Arab term al-mulk (“the power”), underlining the dominant role of the single deity and the legitimisation of political power through religious ideology.
After visiting the Museum, Villafranca and Gámez awarded the prizes in the Dibuja y conoce en el Museo children’s art competition in the Palace of Carlos V. This 9th edition of the competition had 3494 entrants, 1081 more than in 2010, from 62 schools throughout Andalusia. This year’s winners and runners up came from Fuengirola (Málaga), Martos (Jaén), Granada town and Granada province.
This year’s jury was made up of Manuel Ruiz, painter and former coordinator of the Granada Fine Arts Pedagogical Cabinet for the Fine Arts (Gabinete Pedagógico de Bellas Artes de Granada), Carlos Villalobos, lecturer at the Granada Faculty of Fine Arts, judging the category Dibuja en el Museo de la Alhambra, and Blas Calero, head of the Department of Cultural Extension of the Granada School of Art, and Ideal journalist Miguel Ángel Alejo, in the Conoce category.
Hugo Zafra Alarcos, age 4, from Nuestra Señora de las Angustias school in Huétor Vega (Granada), took first prize in the age 4-6 group, with Adrián Martín Vázquez, age 5, from Gloria Fuertes in Peligros (Granada), in second place. In the 7-8 years age group, first prize went to Elena Ruiz Salazar, age 7, from Cardenal Cisneros school in Villanueva de Mesía (Granada); runner up Álvaro Márquez Berbel, age 8, from Gran Capitán school in Íllora (Granada). In the 9-11 years group, Gabriela Albertos, from Valdelecrín school in Fuengirola (Málaga), took first, with María de la Luz Martínez González, age 9, from Regina Mundi school, in Granada, taking second.
In the Conoce category, aimed at secondary school students, first prize in the 12-14 years group went to Adrián Arjona García, from Fernando III college in Martos, Jaén, with Andrea Pérez González, from La Presentación college in Guadix (Granada) taking second.
In the 15-17 age group, prizes went to Lucía Pérez García from Salesianos college in Málaga, and Diana Sánchez Álvarez, from Montes Orientales college in Iznalloz (Granada).
The PAG also organised an open day for all visitors interesting in learning more about the Museum of the Alhambra. On 18 May, doors open from 8.30 am to 8.00 pm, with guided tours offered by senior volunteers.
In 1977, the International Council of Museums (ICOM) established 18 May as International Museum Day, to raise public awareness of the role of museums in society. This year, International Museum Day will give visitors the opportunity to discover and rediscover individual and collective memory.

Museum of the Alhambra