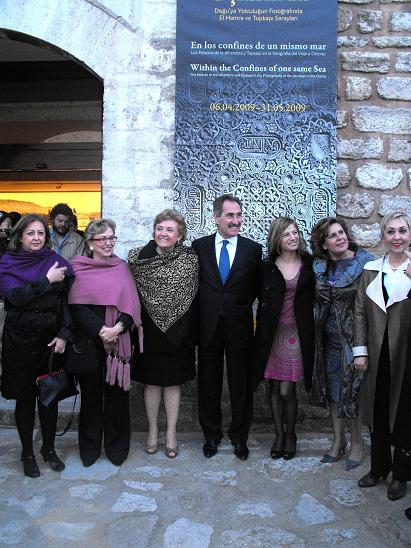 To mark the holding of the 2nd Forum of the Alliance of Civilizations in Istanbul, the Topkapi Palace hosts, from April 6th to May 31st, 2009, the exhibition ‘Within the Confines of one same Sea. The Palaces of the Alhambra and Topkapi in the Photography of the Journeys to the Orient’ The exhibition has been organized by the State Corporation for Spanish Cultural Action Abroad, SEACEX, the Instituto Cervantes and the Patronato de la Alhambra y el Generalife, together with the Topkapi Palace Museum in Istanbul.
The exhibition “En los confines de un mismo mar. Los palacios de la Alhambra y Topkapi en la fotografía del Viaje a Oriente” (“Within the Confines of one same Sea. The Palaces of the Alhambra and Topkapi in the Photography of the Journeys to the Orient”) has been inaugurated the April 5th at the Topkapi Palace in Istanbul, by the President of SEACEX, Charo Otegui, the Minister of Culture of Junta de Andalucía, Rosa Torres, the Principal of the Instituto Cervantes, Carmen Cafarell, the Director of the Topkapi Palace, IIber Ortayli, and the Director of the Alhambra, María del Mar Villafranca.
The aim of this exhibition, curated by Javier Piñar and Carlos Sánchez, is showing a simultaneous dialogue between the Alhambra and Topkapi through a selection of images of the 19th Century by, among others, the photographers Jean Laurent and Abdullah Fréres. The exhibition invites the viewer to discover the interior of both spaces, starting with their splendid urban settings and entering their courtyards, rooms and decorative details, paying special attention to the way in which both palaces were portrayed by commercial photography.
The exhibition is divided into four sections: “Viajes, monumentos y memoria fotográfica”, “Palacios en la ciudad”, “Palacios en el tiempo” and “La mirada precisa” (“Trips, monuments and photographic memory”, “Palaces in the city”, “Palaces through time” and “The accurate look”). Throughout the visit of the exhibition, urban outlooks establish a dialogue with the detailed photographic record of both palaces, in the same way in which some of the objects reproduced and subsequently spread around the world act as real references of these photographic copies. It is with this objective that up to 126 pieces have been gathered, among which we can find photographs, maps and plans, lithographs, travel books, scale models, plaster reproductions and original pieces from Nasrid and Ottoman times.
Within the varied collection of images, the photographs showing panoramic views of Granada and Istanbul should be highlighted, as both palaces constituted essential references of the landscape. Pieces of exceptional value, such as the photographs of Istanbul by James Robertson or Abdullah F. or the panoramic photographs of Granada by J. Laurent have been selected for the exhibition. Other precious materials from the collection of Sultan Abdul-Hamid will also be present in the exhibition. These materials are currently under the custody of the University of Istanbul, as well as other images and objects from both palaces with a highly important symbolic value, such as the original sword of Sultan Mehmed –conqueror of Constantinople and builder of Topkapi– and the photographic reproduction at natural scale of the sword of Boabdil, the last Nasrid monarch of Granada.
The exhibition also includes two models of the Granada palace and an audiovisual production, which shows, with graphic exhaustiveness, the nineteenth century descriptions of both palaces.
Most exhibited funds belong to public institutions, among which we can highlight the Archives of the Patronato de la Alhambra y Generalife, the Library of the University of Istanbul, the Suna ve Inan Kiraç Foundation – Istanbul Research Institute, the Topkapi Museum, the Library of Congress (Washington) and the Fundación Rodríguez-Acosta (Granada).
The direct precedent of this exhibition was “Luz sobre papel. Granada y la Alhambra en las fotografías de J. Laurent” (“Light on Paper. Granada and the Alhambra in the Photographs of J. Laurent”) organized by the Patronato de la Alhambra y el Generalife and successfully presented at the Palacio de Carlos V in Granada in 2007. However, this exhibition is not a reshow but a new production, as the current project raises a dialogue, through nineteenth Century photography, between the Topkapi Palace and the Alhambra in Granada.