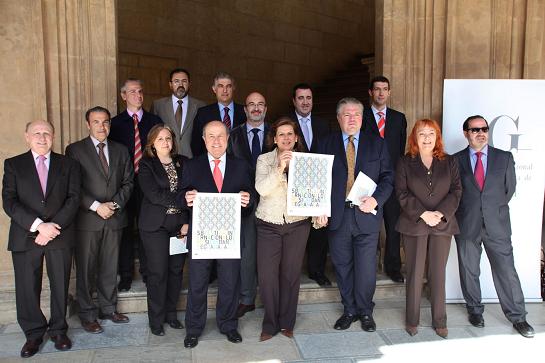 The International Festival of Music and Dance of Granada, which will be celebrated in Granada from June 25th to July 14th, will pay tribute, in its 58th edition, to the romantic writer Washington Irving, on occasion of the 150 anniversary of his death, and to the Spanish composers Isaac Albéniz and Francisco Tárrega. Furthermore, it will remember the expulsion of the Moriscos in 1609.
During the presentation of the event, which has taken place in the Palace of Carlos V, the minister of Culture of the Junta of Andalucía, Rosa Torres, has emphasized “the exotic vision of the Alhambra that Irving has always offered”, a vision that will be able to be contemplated in the play The Red Castle, meant for children and families, which tries to encourage the reading and stimulate the imagination. Torres has emphasized furthermore, the vision that the festival will offer about the expulsion of the Moriscos, which will be showed in six morning concerts.
The 26th of June, the Palace of Carlos V of the Alhambra will receive the inaugural concert with a program of musical pieces by Mozart, Schubert, Dvorak and Strauss, and that will have the presence of the Slovakian soprano Edita Gruberova who, according to the director of the festival, Enrique Gámez, is considered “one of the major singers of the history”.
Between the companies and artists who appears in this edition stands out the London Symphonic Orchestra, the Company of María Pagés, The Royal Ballet with the performance of Marianela Núñez and Tamara Rojo, the National Company of Dance directed by Nacho Duato, or the music composer José María Sánchez-Verdú. Likewise, the International Courses Manuel de Falla will celebrate its 40th edition, with the recognition of being one of the oldest extraordinary programs of education in Spain.
On the other hand, it will pay tribute to the deceased flamenco dancer Mario Maya, and the FEX will spread and complete again the festival for the sixth year in a row. The conductor Daniel Barenboim will close the Festival with three concerts in which he will offer music by Beethoven, Wagner and Bruckner. The festival has a budget of almost four million Euros. The tickets will be on sale from the 18th of April.