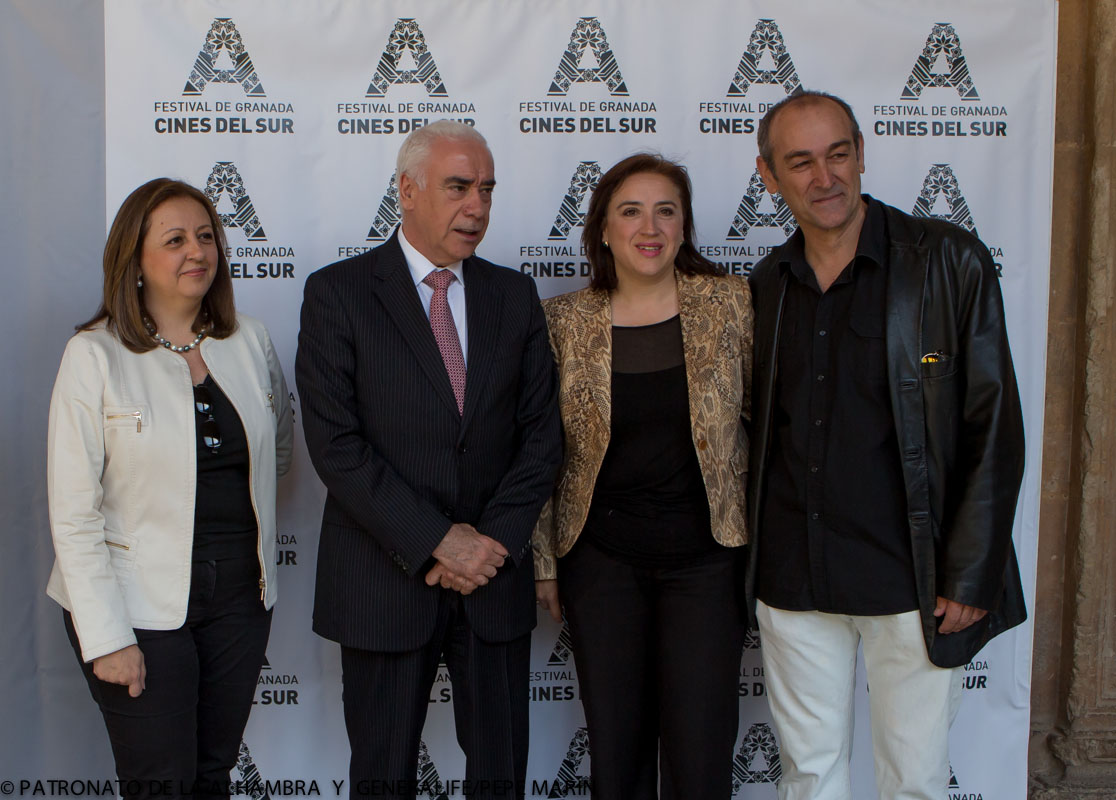 The Minister for Education, Culture and Sport, Luciano Alonso, presented the 8th edition of the Granada Cines del Sur film festival, which from 1st-8th June will be screening some of the best productions from countries in Asia, Africa and Latin America...

The Minister for Education, Culture and Sport, Luciano Alonso, presented the 8th edition of the Granada Cines del Sur film festival, which from 1st-8th June will be screening some of the best productions from countries in Asia, Africa and Latin America. Alonso emphasised that one of the most important new aspects of this year’s festival was the strengthening of the ties between the city of Granada and the Arab world through the creation of a new prize, as well as the return to open-air film screenings.
Luciano Alonso, who was accompanied by the Director of the Council of the Alhambra and Generalife, María del Mar Villafranca; the Delegate of the Regional Government of Andalusia in Granada, Sandra García, and the festival director, José Sánchez Montes, announced that the official section would consist of 10 films, which will be competing for the Alhambra de Oro (Golden Alhambra) prize and will be shown at the Isabel la Católica Theatre in Granada.
Various important directors will be presenting their latest offerings, including the young Iranian film-maker Reza Dormishian, who will be presenting his second full-length feature entitled I’m not angry!, and Philippe Aractingi, the Lebanese director with most awards in recent decades, who will be competing with his latest documentary ‘Heritages’.
The Minister said that the Cines del Sur Festival “is now an essential landmark on the calendar” each spring in Granada and stressed that the event began with “two main objectives”, firstly the dissemination of films made in countries regarded as belonging to the South and secondly, the establishment of mechanisms for cultural cooperation. He also paid tribute to Alberto Elena, one of the first people behind this project who died recently.
Luciano Alonso also referred to one of the novelties of this year’s festival, a joint project between the Council of the Alhambra and Generalife and Cines del Sur involving the creation of the Alhambra de Plata (Silver Alhambra) prize for the best production in Arabic, an award open to all films relating to the Arab world that participate in this eighth edition regardless of whether or not they are part of the official section.
One of the festival’s objectives is to get young people involved and to this end the jury for this section will be made up of undergraduates studying audiovisual communication at the University of Granada.
Open-air screenings
Another new feature of this year’s edition is a return to open-air screenings in the Plaza de las Pasiegas. Films such as ‘IloIlo’, the debut of the director Anthony Chen, which won the Golden Camera Award at the Cannes film Festival in 2012, and documentaries such as ‘Sigo siendo’ by Javier Corcuera, a journey around Peru through its music, which will also be screened in this square in the centre of Granada.
This year the festival will also be maintaining the section entitled Tan Lejos Tan Cerca (So Far and yet So Near), which was inaugurated last year in collaboration with the University of Granada and the Faculty of Communication. This section will contain films that are representative of the latest cinema produced in the Far East.
For its part, the Al Jazeera International Documentary Festival is consolidating its collaboration with the Cines del Sur Festival, with a selection of the best films that were shown at this event in Qatar, of which perhaps the best known is ‘Salma’ by the acclaimed director Kim Longinotto, well-known for her portraits and her sensitivity, about whom the MOMA of New York held a retrospective exhibition in 2009.
Outside the Official Section, in the Palacio de los Condes de Gabia and with the collaboration of the Provincial Council of Granada, viewers can enjoy a retrospective about the Indian director, Ritwik Ghatak, which will include ‘The Unmechanical (Ajantrik)’, one of the first Indian films in which an inanimate object (a car) was treated as a character in the story, ‘The Cloud-Capped Star (Meghe Dhaka Tara’) and ‘E-Flat (Komal Gandhar)’.
Luciano Alonso also announced that collaboration with the Provincial Council, the University of Granada and the Andalusia Film Library would be increased so enabling activities in and around the Cines del Sur Festival to be held throughout the year.

Poster for this year’s edition
The poster for this the 8th edition of the Cines del Sur Festival, was also unveiled at the presentation. It was created by Ángel Lozano, a graphic designer from Granada, who has combined three easily recognised elements in its creation: the number eight, the nazar boncuk and the geometric compositions found in traditional floor tiles. The nazar boncuk is an amulet of Turkish origin in the shape of an eye which protects the wearer from misfortune; this image spread throughout the Mediterranean region to Arabia passing through Turkey before arriving in India.
The designer used the geometric singularity of the number eight (the number of this year’s edition) to articulate his idea. The image is presented over a tiled floor, in a mosaic of interwoven eights and eyes. These eyes represent the diversity of visions, the coexistence between cultures and the viewing public without which, according to the author, a Festival of this nature would be meaningless.