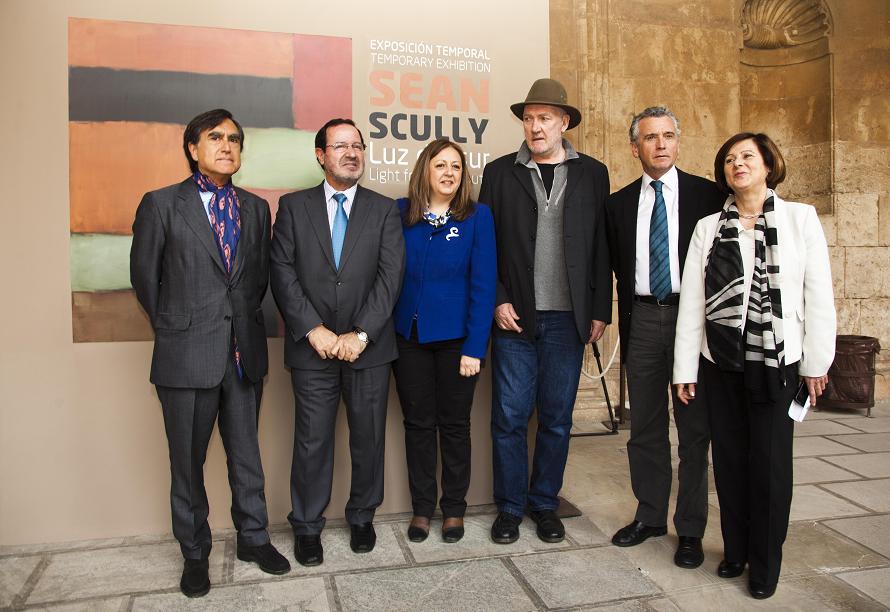 This morning Andalusian minister for Culture Paulino Plata, accompanied by Patronato de la Alhambra y Generalife (PAG) general director María del Mar Villafranca, visited the exhibition Southern Light, by Dublin-born US artist Sean Scully. Scully (1945-), considered a leading exponent of contemporary abstract art, guided the tour personally, and was visibly moved both by the exhibition and by his return to the Alhambra for the first time since his 2011 visit, the inspiration behind the exhibition. Plata commented on the links between the artist and Andalusia, where the artist has collaborated with Granada’s Festival of Music and Dance and has held exhibitions (in Granada and Seville), and described Scully as “one of the greatest living creators, a Turner-prize nominee, and an artist whose works feature in the world’s principal museums and collections”. On the subject of the exhibition, Plata said that the works “open a discourse between the monument and its environment, with incredible results”.

The Alhambra is the treasure trove for the artist’s most recent creative project – an exhibition of works on show in Spain for the first time, which can be visited in the Chapel of the Palace of Carlos V from 30 March to 10 June. Commissioned by Kosme de Barañano, director of the chair of Methodology of History of Art and Sculpture of the Faculty of Fine Arts of Altea (Alicante), the exhibition reveals Scully’s poetic and emotive view of the Alhambra, materialised after a series of visits to the Monument, where his close links with Nasrid aesthetics are manifested by means of his characteristic geometric grids.

The exhibition is composed of almost 100 pieces, including 7 large oils on canvas and on aluminium from the Wall of light series, painted from 2005 to 2011, 40 watercolours, and 48 photographs divided into three thematic suites: Suite Alhambra, taken in September 2011, in which the southern light that the artist first discovered during his youthful trips to Morocco returns to his imagery via Nasrid decorative details; Aran 2005 (Ireland) and Santo Domingo For Nene 1999 (Dominican Republic). The exhibition catalogue has been published by PAG and TF Editores, and is available in both English and Spanish from the Alhambra Gift and Book Shop or www.alhambratienda.es.

Many artists and travellers, including Washington Irving, Owen Jones, Richard Ford, Mariano Fortuny and Joaquín Sorolla, found in the Alhambra an oasis of orientalism in the West. Scully had already approached the oriental world through a series of trips to Morocco in the footsteps of Henri Matisse in his youth, although it was in the Alhambra where he discovered the essence of the aesthetics of al Andalus.

According to María del Mar Villafranca, “a constant since the early 19th century has been the arrival of artists to the Alhambra. The vision created by these artists and travellers, particularly the British Romantics, consolidated the monument as an obligatory stop on the 19th century’s Orientalist grand tour. And, as Scully shows us, it is still present in the travel ethos of contemporary Orientalism”.

Scully has taken part on the Artistic Creation Laboratory, part of the Master Plan for the Alhambra and Generalife, the roadmap for the Alhambra for the 21st century. The aim of the Laboratory is to reveal the vision of contemporary artists of the Alhambra. Fruit of this mediation is this exhibition, which approaches the vision and work of Sean Scully, who has declared that “abstraction’s the art of our age … it’s a breaking down of certain structures, an opening up. It allows you to think without making oppressively specific references, so that the viewer is free to identify with the work. Abstract art has the possibility of being incredibly generous, really out there for everybody. It’s a non-denominational religious art. I think it’s the spiritual art of our time”.
Location: Palace of Carlos V (Chapel). The Alhambra and Generalife site
Dates: 30 March – 10 June 2012
Hours: Daily: 9 am – 8 pm