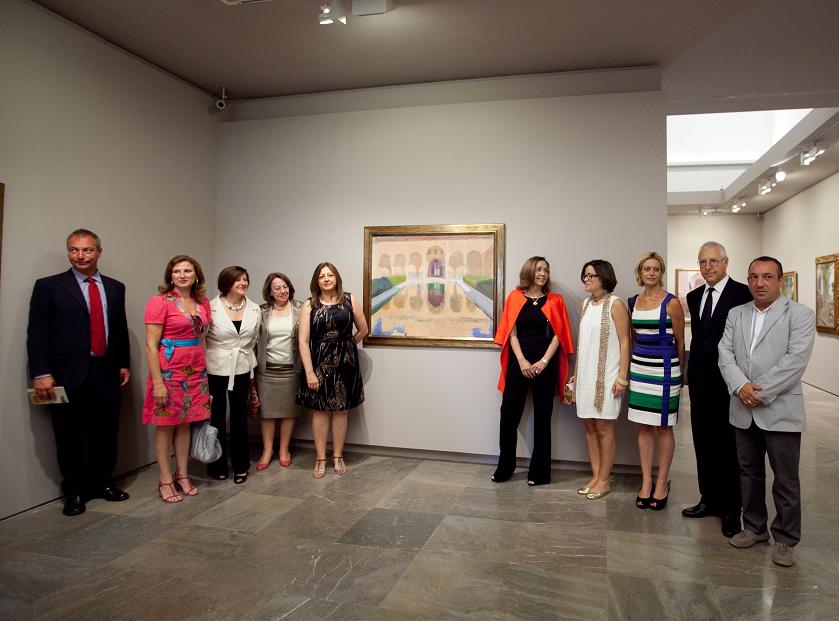 Gardens of Light opens at Museum of Fine Arts today

From today onwards, the Museum of Fine Arts in the Palace of Carlos V is immersed in the light and colour of Andalusia, with the inauguration of Gardens of Light, an exhibition of paintings by Valencian artist Joaquín Sorolla (1863-1923), inspired by Arab courtyards and the artist’s fascination with the region. The exhibition, one of the cultural events of the year in Andalusia, runs until 14 October.

This morning, representatives from the world of culture, including Government of Andalusia secretary general for Culture, Montserrat Reyes, and figures from the three institutions involved in the project, including  María del Mar Villafranca, general director of Patronato de la Alhambra y Generalife, and Consuelo Luca de Tena, director of the Sorolla Museum, attended the inauguration of the exhibition, consisting of 23 paintings from the Sorolla Museum and another 22 from institutions and private collections around the world, some on view to the public for the first time. Moreover, Gardens of Light also features a large collection of documents, such as letters, photographs and the Alhambra visitors’ book containing Sorolla’s signature.

The exhibition, commissioned by a committee of experts made up of Tomás Llorens, Blanca Pons-Sorolla, María López Fernández and Boye Llorens, retraces the encounter between Joaquín Sorolla and Andalusia and its millenarian culture, and portrays the artist’s discovery of the Arab courtyards and gardens of the Alcazar of Seville and of the Alhambra, standing out against the white background of the Sierra Nevada. His fascination with Islamic gardens affected him so deeply as to lead him to remodel the poesy and style of his work in his later years, and to recreate one in the garden of his house in Madrid.

Gardens of Light, a travelling exhibition, is organised by Patronato de la Alhambra y Generalife, the Sorolla Museum and Ferrara Arte. After a stint at the Palazzo del Diamante in Ferrara, Italy, where it received much acclaim from critics and public alike, Gardens of Light now visits the Alhambra; next stop is Madrid’s Sorolla Museum in Madrid, where it will run from 29 October onwards.

Gardens of Light is broken down into five sections (Earth, Water, Courtyards, Gardens and the Garden of the Sorolla House). The exhibition focuses on a crucial time in the artist’s creative life, the years of his full maturity and, specifically, on these compositions, where architectural designs, flora, marble, tiles, light and colours all come to life. The artist’s brush conveys reflections on water, light filtering through and dissolving geometrical architecture, and the colourful mosaic of the southern garden.

The catalogue of the exhibition, in three languages (Spanish, French and English), is published by Ediciones El Viso and contains articles by experts in Sorolla and high-quality copies of all the paintings featured in the exhibition.
Location: Palace of Carlos V. The Alhambra and Generalife site
Dates: 29 June – 14 October 2012
Hours: Daily: 10 am – 8 pm