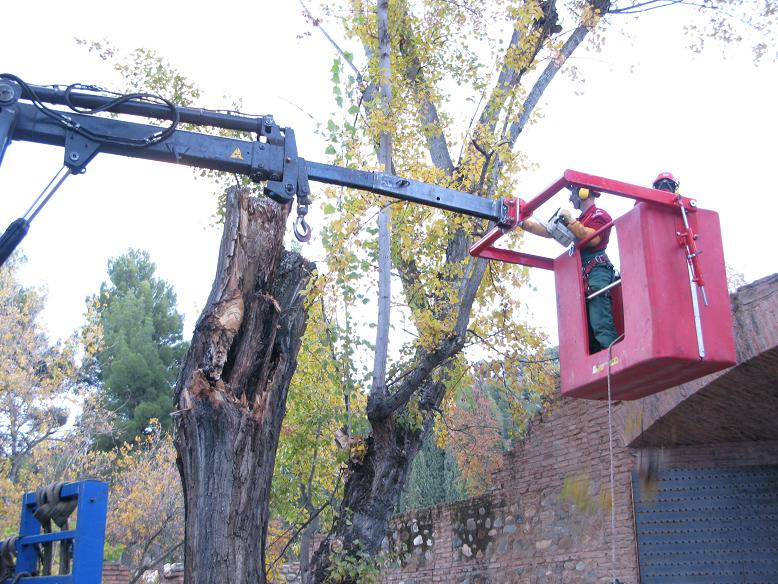 As part of its Master Plan 2007-2015, the Patronato de la Alhambra y Generalife (PAG) has implemented a programme for the restoration of the groves and woods at the Alhambra site. The aims of the programme are, on the one hand, is to diversify the species of trees and shrubs in the Alhambra woods and groves by means of the systematic planting of some hundred trees each year, including maples, oaks, limes, horse chestnuts, hackberries, ash, yews, etc., and, on the other, to reduce the risk of accidents caused by falling trees or limbs, by means of pruning, pollarding and other horticultural techniques and, if all else fails, by removing trees when the risk of accident endangers passers-by or historical assets.
The Alhambra Woods, planted in the 19th century, have suffered a range of setbacks, including the outbreak of Dutch elm disease from the late 90s onwards. Moreover, between 2008 – 2010, over 200 horse chestnuts, sycamore maples, acacias, privets and Aleppo pines, have been lost through falling, injury or root damage, to the serious detriment of the Gomérez and San Pedro groves.
In view of the situation, the PAG has carried out a study in collaboration with specialist horticulturalists on the “Analysis of the status of and risks to the Alhambra and Generalife groves and the Gomérez and San Pedro woods”, drawing up the “Management plan for the Alhambra woods”. The plan centres on some 500 trees, proposing the regular review of 59, pruning of 38, removal of dangerous branches from 15, canopy thinning of 24, the removal of several individuals identified as at maximum risk of falling, and the maintenance of the remainder. The plan was approved by the PAG Technical Committee at its meeting of 2 February last, for the forthcoming three years and on the basis of the risk of accident.
At the same time, and following the new Grove Management Plan, in recent years the vegetation of the Alhambra woods has been diversified, with the collaboration of the Council for the Environment and the Andalusian Network of Plant Nurseries (Red de Viveros de Andalucía), which provides much of the plant material.