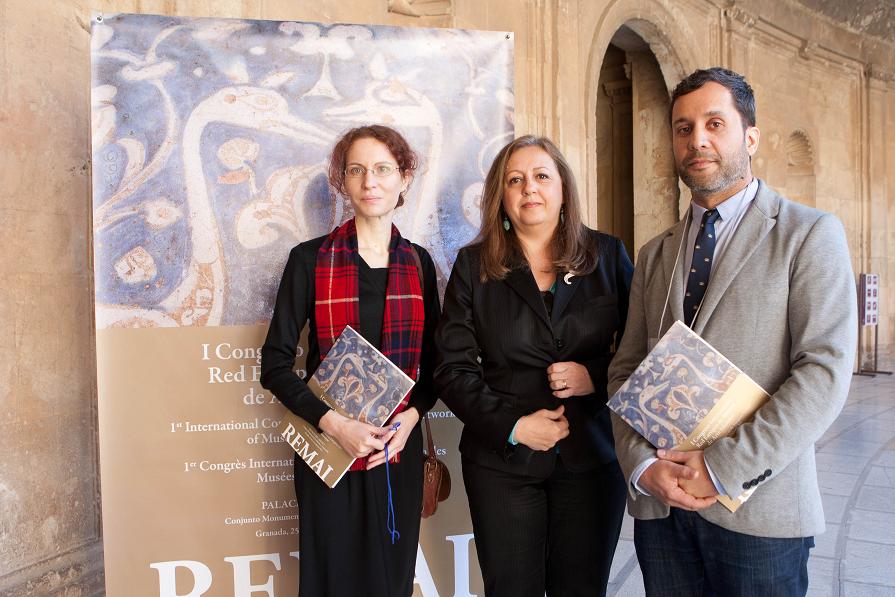 Conferences, featuring leading experts, to run from today until Friday

This morning, María del Mar Villafranca, general director of Patronato de la Alhambra y Generalife, presented the 1st International Congress of the European Network of Museums of Islamic Art (REMAI), a European project led by the Alhambra, the Louvre and the Victoria & Albert Museum.
From today until Friday, leading experts will exchange ideas and findings at the Palace of Carlos V, at a series of conferences for which over 50 people have already registered. Also present at the inauguration were Victoria & Albert conservator Víctor Hugo López Borges, and Claire Déléry, scientific consultant at the Musée du Louvre Department of Islamic Art.

The conferences, which are free of charge, are the high point of the REMAI project, with the aim of setting up a European Network of Museums and Collections specialised in conserving the cultural heritage of Islamic origin. According to Villafranca, “REMAI has strengthened research in Islamic art in the European Union as a strategy for intercultural knowledge and integration.”

REMAI, supported by the Education, Audiovisual and Culture Executive Agency (EACEA)  cultural programme 2007-2013 in addition to setting up a multi-lingual web portal (in Spanish, French, English) as a tool to disseminate the results of the project, also host a virtual exhibition of Islamic art featuring selected items from the collections of the three institutions.

The afternoon session opened with Alhambrism and historical photography, with talks from Juan Calatrava, professor of History of Architecture at the University of Granada; Javier Piñar, doctor in Contemporary History, and architect Carlos Sánchez, who analysed the exemplification of applications of historical photography in the specific case of the Court of the Lions.

López Borges spoke on the Source, collectionism and use of five Nasrid plasterworks in the Victoria & Albert Museum; while Esteban Fernández Navarro, Carmen Esturillo and Blas Calero concentrated on the Islamic docoration workshop in the Escuela de Arte de Granada.

To round off the session, Frances Quílez analysed the Iconographic sources for the study of 19th-century Alhambrism: The Fortuny collection of the Museo Nacional de Arte de Cataluña, and Francisco Serrano Espinosa detailed 80 years of interventions on Hispanic-Muslim heritage and dissemination of Alhambrism by the Contreras family (1824-1906).

Tomorrow, Thursday 26 April, the talks will centre on mediaeval lustreware, and will deal with the technical, formal and productive aspects of the material.

The final day of the series of talks will centre on the production, dissemination and influences of Islamic plasterwork. The first session is given over to plasterwork in the Islamic world; the second will centre on plasterwork on the Iberian Peninsula and, to finish up, María Dolores Jiménez Blanco, lecturer in History of Art at Madrid’s Complutense University, will give a paper on From revelation to possession: cultural origins of the Islamic art collectionism.
Get the website of the ‘European Network of Museums of Islamic Art (REMAI)’