ONCE to feature the Alhambra on 5 million lottery tickets 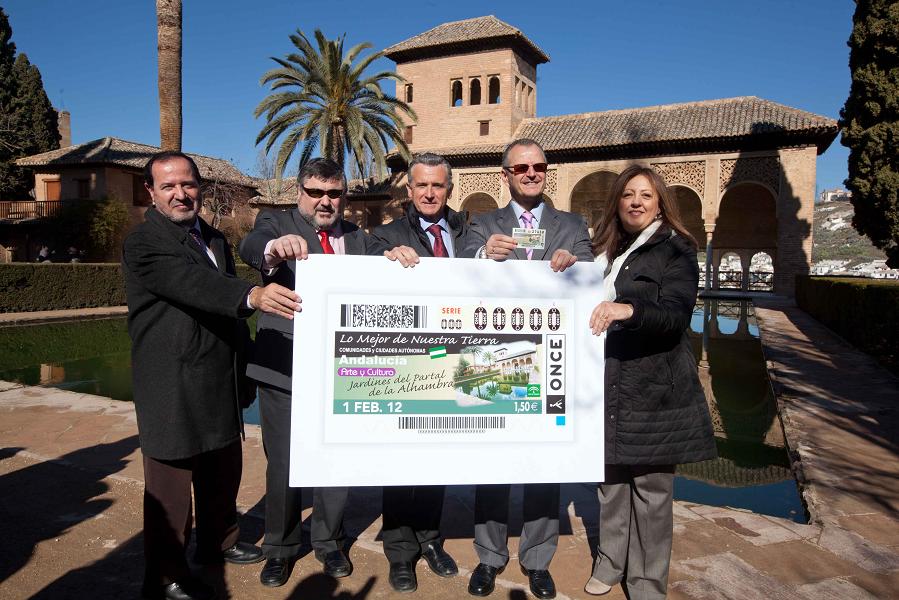 Series to be issued next Wednesday as part of a feature on Spain’s autonomous communities: The Best of our Land

The Alhambra is to feature on 5 million lottery tickets to be issued by ONCE, the Spanish charity for the blind, for its 1 February draw. The tickets are issued as part of a series to run under the title ‘The Best of our Land’, focussing on the culture, gastronomy, folk traditions, new technologies and skills of Spain’s autonomous communities, starting this week with Andalusia.

The tickets bear the image of the gardens of the Partal Palace, under the generic legend Andalucía, Arte y Cultura. ONCE delegate for Andalusia, Ceuta and Melilla, Patricio Cárceles, today gave a copy of the plate used to print the ticket to government of Andalusia minister for Culture, Paulino Plata, at an event also attended by PAG general director María del Mar Villafranca and ONCE director for Granada, Alberto Morillas.

Cárceles praised the ticket as “a way for Andalusians to show our pride in the valuable cultural legacy of the Alhambra, a legacy to be preserved, pampered and loved”. He reminded those present that the Alhambra, Spain’s most visited monument, is also "a key international standard for sustainable cultural management” and advocated a greater accessibility to the monument for people with disabilities. Cárceles asked for a joint effort from the authorities, the private sector and society as a whole, to ensure that culture, "a strategic sector for the development, progress and future of Andalusia” offers equal opportunities to all, independently of their situation or their limitations.

This year, ONCE holds the title of Ambassador for Andalusia, awarded by the Ministry for Tourism, Commerce and Sport in recognition for their contribution to the promotion of Andalusia, through the tickets, and their efforts in favour of universal accessibility. Last year, Andalusian themes featured on 165 million ONCE tickets throughout Spain, 20 million of them focussing on Granada.

The ONCE daily ticket, which sells for €1.50, pays out 50 daily top prizes of €35,000, along with prizes of €500 (to the numbers consecutively before and after the prize number), lesser prizes of €200, €20 and €6 (to tickets with the same last four, three and two digits, respectively) and ticket price refunds for numbers having the same first or last digits as the prize number.

ONCE tickets are sold by over 21,000 sales agents. Thanks to Point of Sales Terminals (POST), buyers can choose their favourite numbers. Tickets are also available from the official ONCE website at www.juegosonce.com