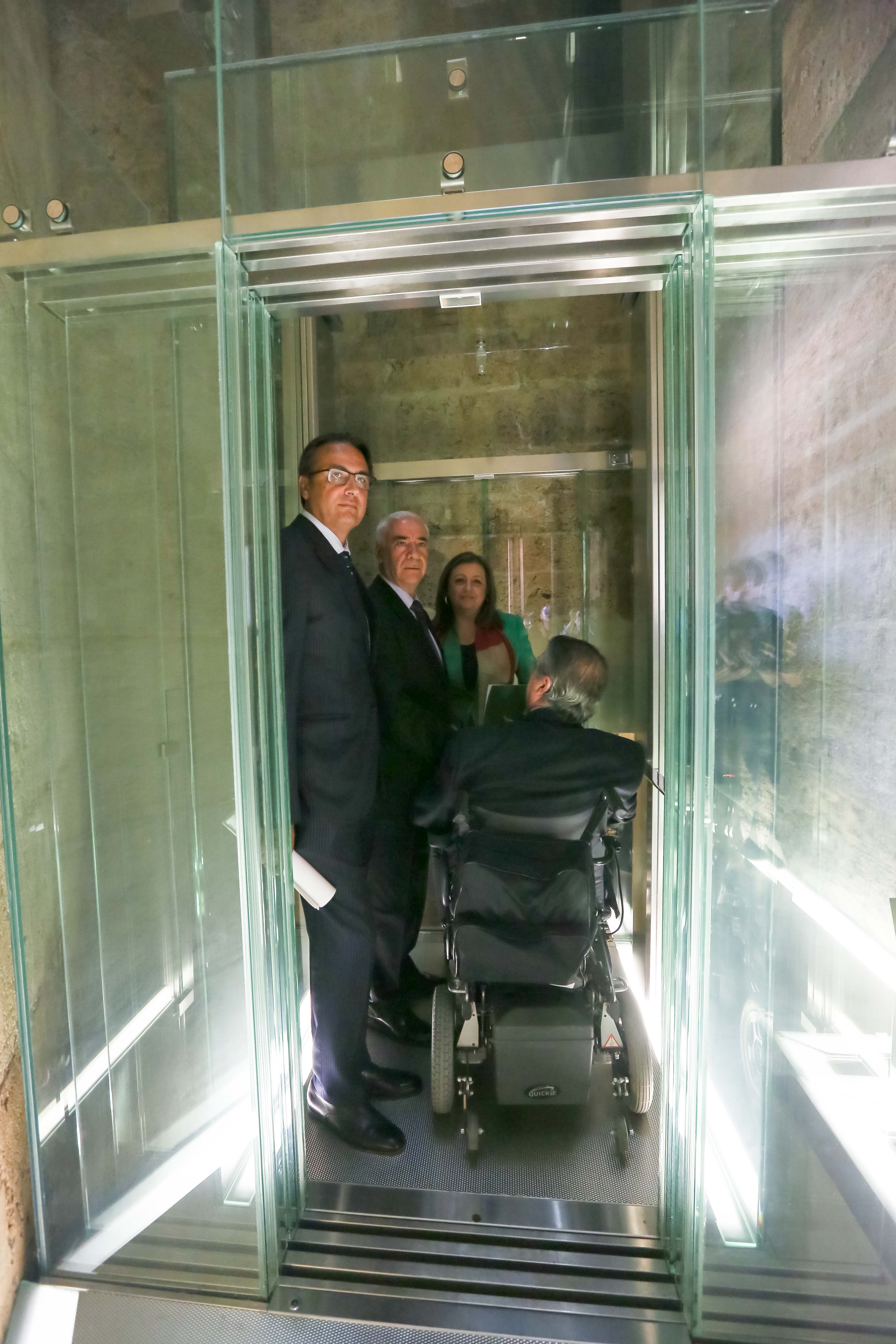 The work involved the installation of a lift, with its own specific design and characteristics, in the Palace of Charles V, so as to remove the architectural barriers that currently impede access to almost all the Palace for people with limited mobility...

The Minister of Education, Culture and Sport of the Regional Government of Andalucía, Luciano Alonso; the Director of the Council of the Alhambra and the Generalife, María del Mar Villafranca; and the regional director of the “la Caixa” Bank in Eastern Andalusia, Victorino Lluch, today visited the lift which has been installed in the Palace of Charles V in the Alhambra.
The work involved the installation of a lift, with its own specific design and characteristics, in the Palace of Charles V, so as to remove the architectural barriers that currently impede access to almost all the Palace for people with limited mobility. The lift has been installed in the north-east corner between the courtyard and the western corridor of the Palace and links the Central Courtyard of the Palace of Charles V with the Fine Arts Museum situated on the upper floor.
The installation of the lift is part of an agreement signed in 2011 between the Obra Social “la Caixa” and the Council of the Alhambra aimed at improving accessibility to the different parts of the Alhambra, so making access easier for all kinds of visitors.
The Rovira-Belatta Architecture Studio was commissioned to draft a report, in which they concluded that over 70% of the monument could either be made accessible or the current accessibility could be improved. The report revealed that in a further 20% of the complex, disabled people would need help from other people and the remaining 10% could not be made accessible due to the conditions of the terrain. The Council of the Alhambra and the Generalife, in collaboration with the Antonio Jiménez Torrecillas architecture studio has designed the best way to integrate this lift into the architecture of the Palace. The building work was executed by the UTE CarlosV, a joint venture formed by 2 companies Otero SL and CPA SL, under the supervision of the architect Antonio Jiménez Torrecillas.
One of the objectives of the Obra Social “la Caixa” is to improve the conditions in which people live, in particular for those people with special mobility needs, and to facilitate access to culture. For this reason, the bank is taking part in the project with a new contribution of 100,000 euros, so as to improve accessibility to the monument, in addition to the investment made by the Regional Government of Andalusia through the Council of the Alhambra and the Generalife to complete the total of 461,967.51€.
This is not the first time that the Obra Social “la Caixa” is collaborating with the Council of the Alhambra. In fact the inauguration of the lift is the culmination of a process of collaboration between the two institutions that started in 2007, in which they signed their first agreement to perform a feasibility study on improving accessibility to the Alhambra.

World Heritage
On 2nd November 1984 UNESCO declared the Alhambra and Generalife of Granada a World Heritage site. At present the monument receives over 2 million visits a year, and of these about 150 a day are people with limited mobility and people with serious physical, intellectual and sensorial difficulties (sight and hearing).
It is therefore important to adapt the Alhambra complex while respecting its surroundings and its identity as an ancient building, a task that is complicated by the fact that it is situated on the top of a hill and has lots of slopes and uneven pavements. The ultimate objective must be to ensure that everyone can enjoy a high-quality visit, because although the main beneficiaries will be disabled people, any improvements in the accessibility of the complex will improve and facilitate the tour for all visitors, families with children and babies, school parties, senior citizens, people who find it hard to walk.

The Obra Social “la Caixa” and the Council of the Alhambra and the Generalife work together on projects like this to bring the Alhambra closer to society and therefore to its visitors. An Alhambra for everyone.