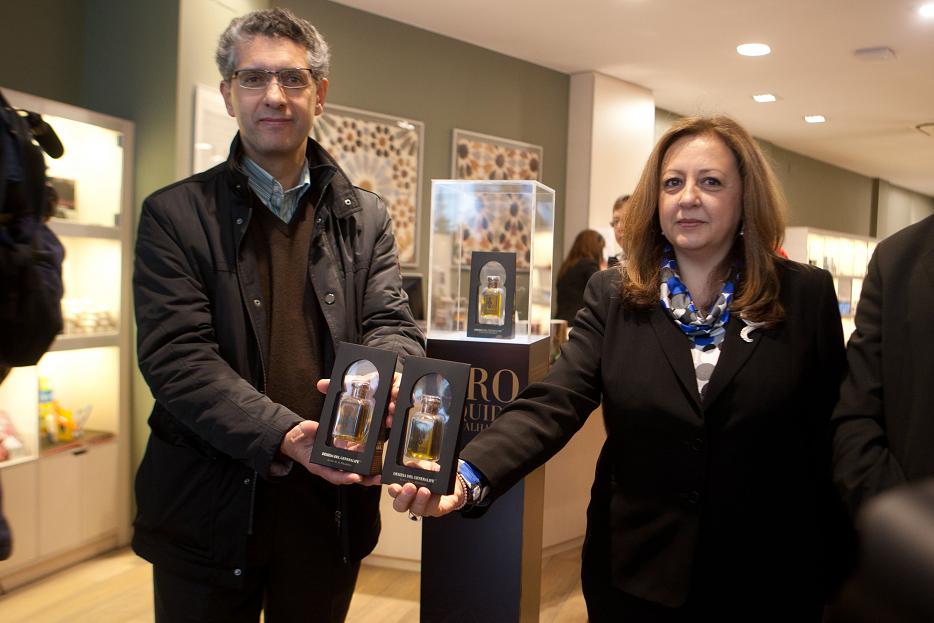 The Alhambra has obtained the new Extra-virgin olive oil production from the centenarian olive groves at the Dehesa del Generalife. This morning, María del Mar Villafranca, general director of the Patronato de la Alhambra y Generalife (PAG), launched the first production of the ecological “liquid gold” in the Alhambra Gift & Book Shop, at 40 Reyes Católicos, Granada, together with the new activities to be held in the Shop during the holiday period.
The aim of this production is to promote the landscape and cultural value of the olive groves at the Dehesa del Generalife, and the oil obtained the EC-Certificate of Conformity of production, being labelled ecological by the CAAE (Comité Andaluz de Agricultura Ecológica). The Extra-virgin olive oil is produced from an ancient variety of olive trees, called “lucio”, an exclusive variety of Granada province, which is a low-productive variety, since it only bears fruits on the end of its sprouts, and also of outstanding historical and cultural interest, because of its agronomic peculiarity and its ancient connection with the site.
PAG started in the beginning of 2003 regular olive growing and exploitation of the olive groves at the Alhambra Gift & Book Shop and others located at premises annexed to the site (Alixares, the surroundings of the cemetery, Cerro del Aire, Huerta de la Mercería), which sums up to more than 52 ha and 4722 olive trees, most of them centenarian.
This year’s production of the oil, which has been classified Extra-virgin due improvements achieved in the olive growing, will be offered in a new container, innovative for its concept and design, under the name of “Oro líquido de la Alhambra“.
In her speech, Villafranca also informed about the new activities to be held in the Alhambra Gift & Book Shop, at 40 Reyes Católicos in Granada, during these Christmas holidays.
Due to the great acceptance in Christmas 2010, this year also is scheduled the literary activity of story telling and puppets sessions, aimed at children aged 3-8. These sessions will be held at 6.30 pm on 23 and 30 December 2011 and 3 and 5 January 2012.
Fans of Granadan-Arab cuisine have the chance to attend an activity to be held at 6 pm on 28 December. Ana María Prieto, author of cookbooks Las recetas de mama and Dulces y Postres, will show how to make a typical Arab desert, also in the Alhambra Gift & Book Shop at 40 Reyes Católicos in Granada. Those interested in attend any of these activities are invited to make a reservation at the Shop or by phone at (+34) 958 22 78 46 in advance, since places are limited.
Lastly, on 29 December, from 6 to 8 pm, the Alhambra Gift & Book Shop in Granada city centre will also host a book signing by poet José Carlos Rosales of copies of the anthology of poetry Memoria poética de la Alhambra, recently published by José Manuel Lara foundation in collaboration with PAG. The book contains a selection of poems by Spanish and Latin-American writers.