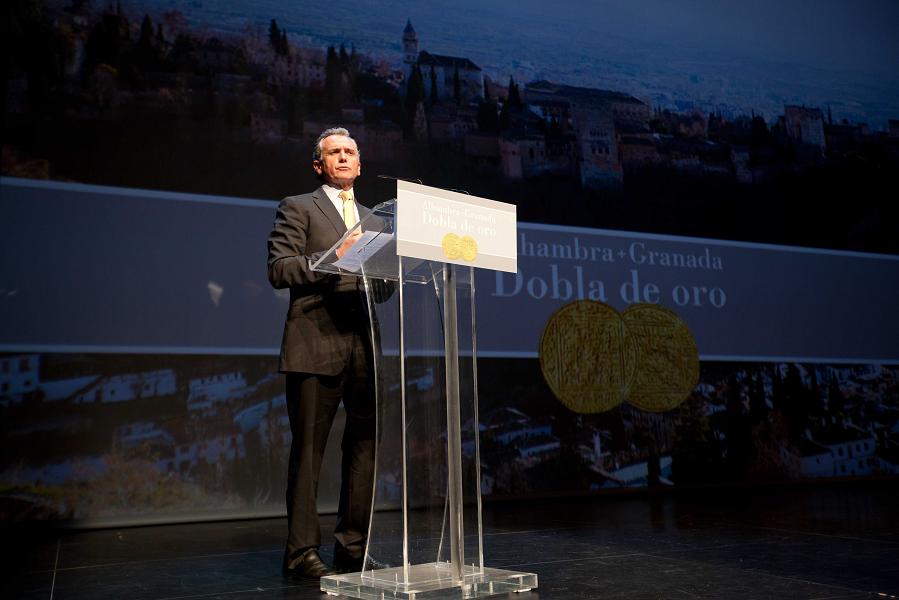 This afternoon, Paulino Plata, Government of Andalusia minister for Culture, presented the Dobla de Oro project in the Isidoro Máiquez theatre, in Andalusia’s Museum of Memory. The project consists of a new double package featuring World Heritage Sites the Alhambra and the Albaicín, in a new joint route combining two visits – one to the Nasrid site and one, the previous day or the day after, to Hispano-Islamic sites in the town of Granada.

The launch, which lasted over an hour and was streamed live on the PAG website www.alhambra-patronato.es, was witnessed by representatives from cultural and tourist organisations and associations and from the Government of Andalusia, Granada Town Council and Granada Provincial Council.

Plata explained that, in order to consolidate the number of overnight stays in Granada and around, the Dobla de Oro package offers visitors “double the view, double the tour, double the visit and double the experience … by means of routes that merge the Alhambra and Granada. It is so important to remember that the Alhambra is the most important cultural and tourist resource we have, in Granada, in Andalusia and in Spain as a whole”.

The new package will come into operation in the spring and will offer a range of visitor options at different prices: self-guided, guided, multimedia-guided and organised groups; another option will be to visit the Hispano-Islamic sites in Granada alone. Plata believes that the project will "strengthen communication between the Alhambra and Granada, though a cultural linking of the hills of Sabika and Albaicín. I am confident that actions like this will create wealth for the area and improve quality of life in the local community. There can be no doubt that the Alhambra is a catalyst for the city’s economy and cultural institutions”.

The initiative coincides with the 40th anniversary of the World Heritage Convention, signed in 1972.