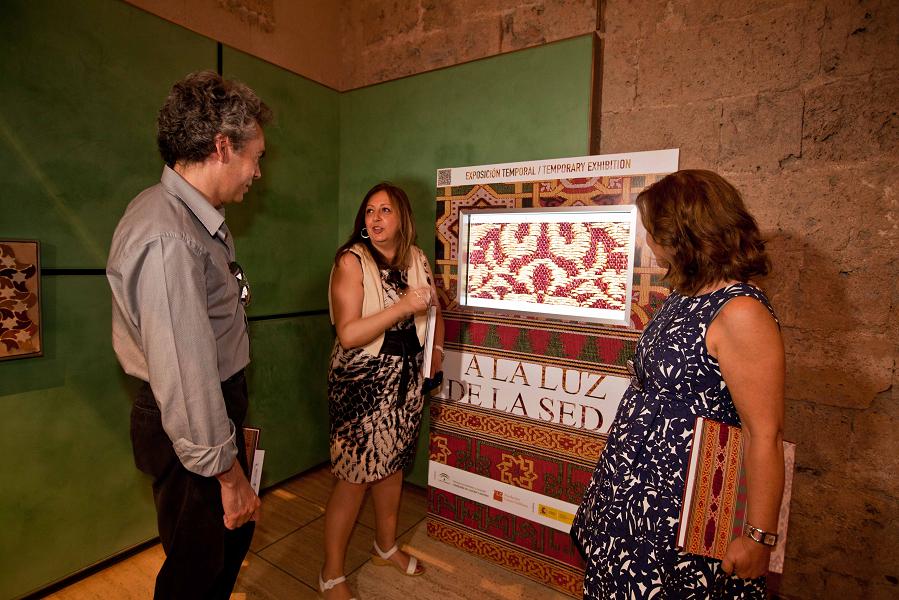 The objective of the exhibition Silk brought to light is to highlight the value of the Nasrid textiles from the collections of the Museum of the Alhambra, the Lázaro Galdiano Museum and the Gómez-Moreno Institute of Granada. Silk brought to light shows this heritage in two temporary exhibitions at the Lázaro Galdiano Museum in Madrid and at the Museum of the Alhambra in Granada, which have been curated by Purificación Marinetto, curator of the Museum of the Alhambra, and Amparo López, curator of the Lázaro Galdiano Museum.
The exhibitions include a documentary entitled El Lampás y las pervivencias Andalusíes en Fez, which is about the only Hispanic-Arabic loom that has been preserved in the whole world; an interactive map with gigapixel images where the approximately 30 institutions which keep textile remains from this period in Spain are located; and the book A la luz de la seda (Silk brought to light) published by TF, which contains the whole catalogues of the above mentioned museums and the works from Gómez-Moreno Institute. The book is available in print and digital formats.

The project: to highlight the value of an unknown heritage

The aim of the project Silk brought to light is to highlight the importance of the textiles and clothing created in Muslim Spain and which achieved their greatest splendour in the royal tiraz of the Nasrid Kingdom of Granada. In spite of continuous vicissitudes, these textiles have been preserved until today at the collections of several museums such as Museum of the Alhambra or the Lázaro Galdiano Museum. These institutions show an important collection of this rich heritage, which is unfortunately still very unknown.

According to the Director of the Patronato de la Alhambra y Generalife, María del Mar Villafranca, “the objective of Silk brought to light is to underline the importance of a part of the Spanish heritage that has not been valued enough: Nasrid silks, its origins and its repercussions. These collections of Islamic –above all Nasrid- silks and textiles gather exquisite and delicate fragments and remnants, which are unique not only for their beauty but also for the complexity of their technique and for the very few remains that have been preserved”.

The project Silk brought to light has been funded by one of the grants that the Ministerio de Educación, Cultura y Deporte (the Education, Culture and Sports Ministry of Spain) earmarked in 2011 for projects which attempt to disseminate, preserve, and highlight the value of heritage.
The exhibition Silk brought to light. The Museum of the Alhambra

The exhibition Silk brought to light will take place from the 11th of July to the 31st of December 2012. It gathers a collection of Andalusian textiles from the Museum of the Alhambra collection, as well as contemporary objects such as “chapines” (shoes). These items help us to reconstruct and imagine the history of what yesteryear were sumptuous clothing that dressed and decorated the nobility and the courtiers of the Nasrid sultanate, and that contributed to create the luxurious colourful and full of light halls of palaces such as the Alhambra.

Silks were present at all times of the day and life of medieval Spaniards, both Christians and Muslims. They were used for clothing, to organize and make rooms comfortable and they would even travel with the deceased in their last trip. Textiles would show images as well as eloquent epigraphic inscriptions that wished happiness, prosperity and mercy. Silk played a leading role in the cultural development of the Iberian Peninsula, since they were also an incentive to the development of technical knowledge and the specialization of the industry.

Audiovisual resources that help the visitor to understand the complex creativity and the virtuous technique needed to create these silks complement the exhibition Silk brought to light. Plasma screens and gigapixel images will introduce the visitor in the soul of these textiles where they will be able to appreciate details that until now were only known by researchers. The visitor will be driven by the documentary El Lampás y las pervivencias Andalusíes en Fez to the only tiraz that has been preserved.
The Hispanic-Arabic loom from the city of Fez has kept alive this technique, which was introduced in the XI century from Persia and which, enabling the creation of very complex patterned textiles, led to a revolution. Finally, an interactive map will reveal the location of textile remains of this period in Spain: this new Route of Islamic Textiles in Spain enriches the cultural and tourist offer of the country.

Highlighting the value of Andalusian textiles in the XIX century

Christian appreciated and collected Andalusian silks, and they preserved them in chasubles, the bottoms of reliquaries and royal clothing. But only its revalorization by collectors from the XIX century avoided their complete loss. In this process were especially relevant scholars and collectors such as José Lázaro Galdiano –who systematically searched for medieval textile remnants- or the researcher Manuel Gómez-Moreno Martínez, pioneer in the research on these items and who discovered the most important site of medieval textiles in the monastery of Las Huelgas.
Catalogue A la luz de la seda (Silk brought to light). Publisher TF

The book A la luz de la seda compiles the catalogue raisonné of the textile collections of the Lázaro Galdiano Foundation, the Museum of the Alhambra and a selection of works from the Gómez-Moreno Institute. It is an authentic corpus of reference for the research of these materials, and the most complete database on Islamic Spanish silks published until today.

The relevance of this publication is amplified by its innovative scientific approach: besides the description and study of the textiles, new methods of research have been applied such as the chemical analysis of fibres and dyes or the gigapixel images, which enable a really close view of the works and therefore contribute to easily identify techniques as well as other peculiarities of the textiles.

Undoubtedly this publication is an excellent tool to get to know the textiles of this period of Spanish history. These silks –objects of refined taste and unequivocal sign of luxury- show the excellence achieved by the manufacturers during the Nasrid dynasty.
Exhibition location: Museum of the Alhambra. Palace of Charles V                                  Lázaro Galdiano Museum. Madrid
Exhibition dates: 11 July – 31 December 2012
Website