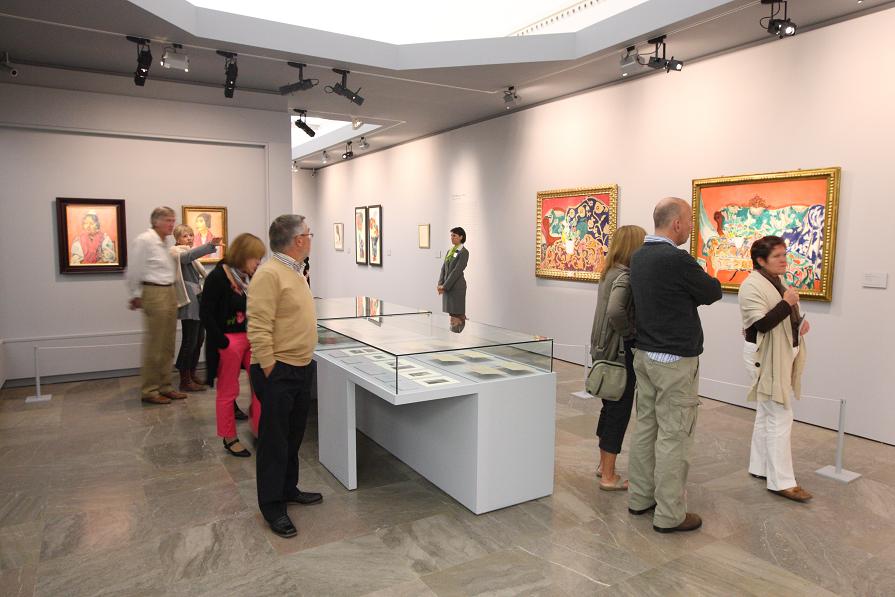 More than 80,000 persons have visited the Exhibition Matisse and the Alhambra (1910-2010) at the Museum of Fine Arts of Granada in the upper floor of the Palace of Charles V, since its opening ceremony on 15 October until yesterday. The exhibition will close on 28 February 2011. It recreates Matisse’s journey to Spain, Andalusia and the Alhambra, where he was on 9, 10 and 11 December 1910, as well as the fascination he felt for the Oriental world after his visit to the Nasrid Monument.
The exhibition has been organised by the Patronato de la Alhambra y Generalife (PAG) and the Spanish State Agency for Cultural Commemorations (SECC), in collaboration with the “laCaixa” Foundation. 95% of the visitors to the exhibition have been individual visitors, 54% Spanish ones, from which 35.59% are from Granada. 29.49% are EU-citizens and 16.15% from the rest of the world. Most of the visitors have an university degree and have expressed their “very high” satisfaction after visiting Matisse and the Alhambra (1910-2010).
María del Mar Villafranca, PAG Director-General o, and Francisco Jarauta, Full Professor of Philosophy, University of Murcia, are the curators of the exhibition, which recreates the journey of the French painter Henri Matisse, whose centenary will be celebrated soon.
The visitors to the exhibition will have free admission and there will be an educational program with guided tours for school children and interested general public. Further information is available at the PAG office in the Corral del Carbón, Mariana Pineda street, or by calling (+34) 958 575 126. The exhibition Matisse y la Alhambra (1910-2010) is open to those interested from Sunday to Thursday, from 9:00 to 18:00, and on Fridays and Saturdays from 9:00 to 20:00. It is also possible to join a free guided tour on Tuesdays and Thursdays, 16:00-17:00 and 17:15-18:15.
The exhibition will put on display more than hundred pieces: 35 works of Matisse, oil paintings, drawings, lithographs and one sculpture; 60 works of Islamic art of extraordinary value, such as ceramics, glassworks, works of bronze, tapestries, miniatures, latticework and works of wood; also personal letters, postcards and photographs from the French painter, from the collection of the Matisse archives in Issy-Les-Moulineaux, and other objects that fit in the context, such as fabrics he collected during his lifetime (like Manila shawls, Moorish fabrics and tapestries from the Alpujarra region) and which show the fascination the artist and traveller felt for the Muslim cultural heritage.