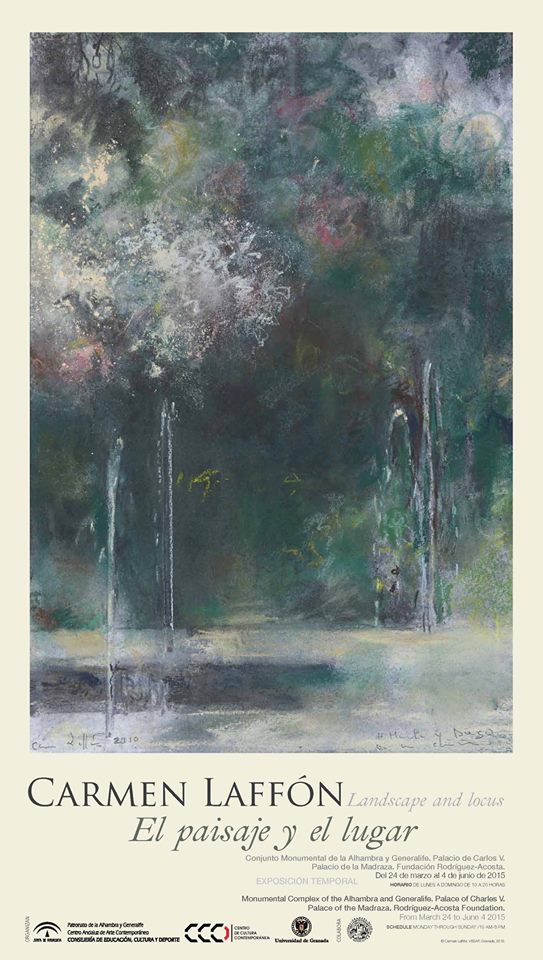 The exhibition ‘El paisaje y el lugar’ (Landscape and place) by the Seville artist Carmen Laffón, which offers a journey across Andalusia in a hundred works of art, has so far received over 13,362 visits in the fifteen days since it opened in three venues in Granada: the Palace of Charles V in the Alhambra, the Rodríguez-Acosta Foundation and the Palace of the Madraza, which since the 24th March have been staging the most important exhibition of her work ever held in Andalusia and the biggest since the retrospective staged by the Reina Sofia Museum in Madrid in 1992.
The exhibition, which is organized by the Alhambra, the University of Granada and the Andalusian Contemporary Art Centre (CAAC), brings together around a hundred works of art that reveal the contrasts of Andalusia and take us on a journey from the lowlands of the Guadalquivir to the Arabic gardens of the Generalife. Laffón uses a range of artistic techniques including oil on canvas, iron, pastels, charcoal on paper, wood, paper and bronze to explore the landscapes of Andalusia with several series of works on riverbanks, skies, the reserves of Sanlúcar de Barrameda (Cádiz) and the gardens of the Alhambra.
11,663 people have visited the exhibition at the Granada Fine Arts Museum on the upper floor of the Palace of Charles V and below in the Palace Chapel, while 287 have seen the works on display at the Rodríguez-Acosta Foundation and 1412 people at the Palace of the Madraza. The exhibition which was first shown in Seville has thirteen new works in its Granada edition, one of which was painted just days before the exhibition opened on 24th March. It has also been mounted differently so as, in the words of exhibition curator, Juan Bosco, to highlight the move from “the convent spaces of Cartuja to the imperial spaces of Granada”.
Carmen Laffón is a member of the Royal Academy of Fine Arts of San Fernando in Madrid and a Favoured Daughter of Andalusia. Among other awards, she has won the National Art Prize (Premio Nacional de Artes Plásticas) and the Gold Medal for Merit in Fine Arts.