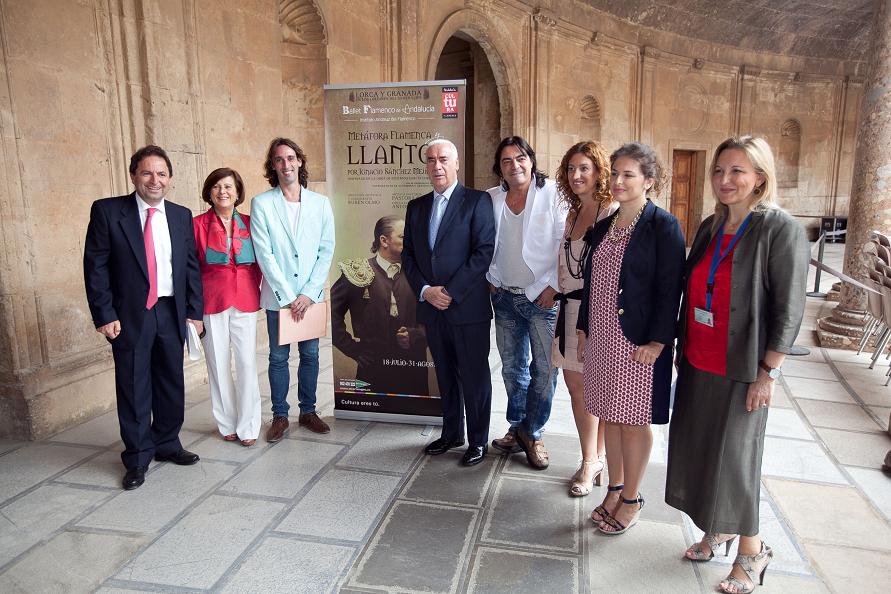 Today in Granada, Government of Andalusia Minister for Culture, Luciano Alonso presented this year’s edition of the Lorca and Granada in the Generalife Gardens festival, starring the Flamenco Ballet of Andalusia. The festival will open on 18 July next with Metáfora flamenca and Llanto por Ignacio Sánchez Mejías, both directed and choreographed by Rubén Olmo, with contributions from Pastora Galván and Antonio Canales. The cast features two Granadan artists: solo dancer Patricia Guerrero and David Carmona, who composed the music for Flamenco Metaphor.

The act of bringing the Flamenco Ballet of Andalusia to the Generalife theatre for the summer festival reflects the commitment of the Ministry of Culture to the company, a flagship for Andalusian culture and affiliated with the Andalusian Institute for Flamenco since 2011. The show consists of two parts – the first, Metáfora flamenca, features guest dancer Pastora Galván, in a journey through romances, cantiñas, Granadan tangos, bulerías, flamenco waltzes, verdiales and zambras. Elegant, dynamic and heartfelt, the suite is composed with the force and talent of Granadan guitarist David Carmona.

Metáfora flamenca suite is an allegory for life, the leitmotif running through this years Flamenco Ballet of Andalusia production, Metáfora, from which this first part is taken. Olmo took his inspiration for the piece from Nietzsche, for whom dance was a metaphor for thought, and it inevitably drips with the essence of the flamenco rhetoric from which it drinks, as described by Federico García Lorca in his poem El baile, “Andalusian hearts/Unearthing ancient sorrows”

For a cycle is dedicated to Lorca and as a tribute to the poet, Olmo has created a choreography based on the poem Llanto por Ignacio Sánchez Mejías. With the special collaboration of Antonio Canales, the piece takes a look at the life of Ignacio Sánchez Mejías up to his death in the bullring, concentrating on his friendship with Lorca. The music was composed for the occasion by guitarist Manuel de la Luz, from Huelva, following geometric choreographies coordinated with seguiriyas, fandangos and tangos.

Lorca and Granada in the Generalife Gardens

The Lorca and Granada in the Generalife Gardens programme was created in 2002 by the Government of Andalusia Ministry for Culture and Sports, as a major cultural offer for Granada’s summer evenings, each year paying tribute to Lorca’s work through flamenco theatre and dance. Shows staged over the years have included Poeta en Nueva York, by Blanca Li, and Romancero Gitano and Yerma, by Cristina Hoyos. This year sees the 11th edition of the programme. According to statistics made available by SGAE, the Spanish association of authors and publishers, the show has been seen by over 400,000 people so far and enjoys average ticket sales of 90%.

The Flamenco Ballet of Andalusia was set up 17 years ago and, since then, has received much acclaim, from public, critics, and theatre experts alike. Awards received by the company include the Spanish Choreography Award, for the show El perro andaluz, directed by María Pagés, while Cristina Hoyos, in her facet as a choreographer, has been nominated for the Max theatre award on several occasions, most notably for Yerma, which received the Max award for Best Female Dancer, and Romancero gitano, which was the most seen show of 2006.

In February 2011 the company became affiliated with the Andalusian Institute for Flamenco, coming under a new management model coordinated by an artistic committee chaired by Víctor Ullate and with Matilde Coral as President of Honour. Metáfora was the proposal chosen by the committee for the 2012-13 season. The show premiered last February at Jerez Festival and is currently touring Andalusia, where it has now played at the Canovas Theatre in Malaga, the Cocheras del Puerto Theatre in Huelva, the Maestro Padilla Municipal Theatre in Almería and Seville’s Teatro Central, in addition to a run at Madrid’s Fernán Gómez Theatre. Plans are also being finalised for an international tour, kicking off with the Mont de Marsan Flamenco Festival and the Cordoba Guitar Festival in July.