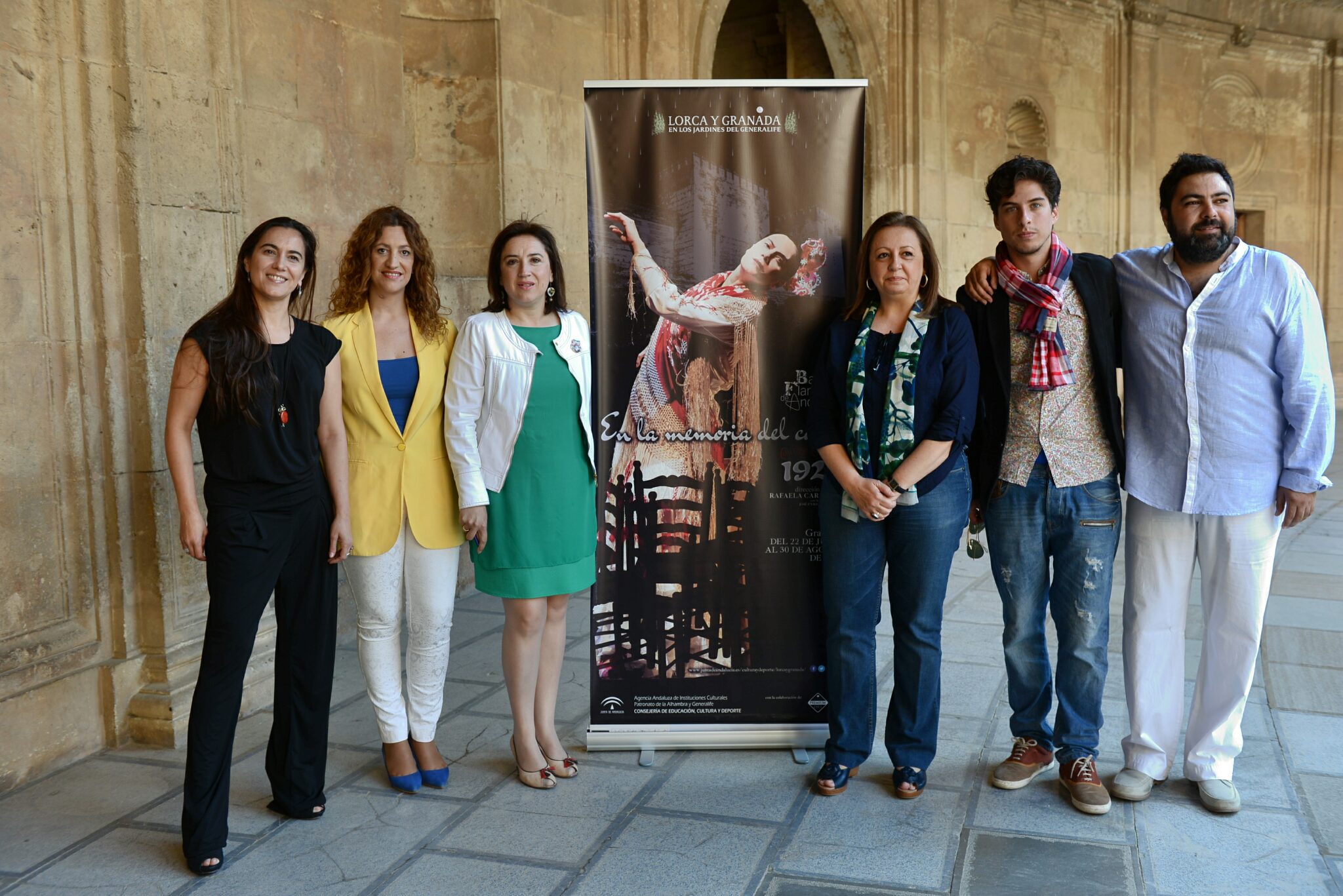 A special version of the choreography En la Memoria del Cante: 1922, created by Rafaela Carrasco for the Ballet Flamenco de Andalucía dance company, will be filling the night air at the Generalife...

A special version of the choreography En la Memoria del Cante: 1922, created by Rafaela Carrasco for the Ballet Flamenco de Andalucía dance company, will be filling the night air at the Generalife Theatre this summer in the Lorca and Granada cycle organized by the Regional Ministry of Education, Culture and Sport since 2002. This new version for the warm summer nights of Granada will include the participation of the flamenco singer José Enrique Morente (the son of Enrique Morente) and additional stage scenery and dance troupe members.
This new show, which will be staged from Tuesdays to Saturdays between 22 July and 30 August, was jointly presented by the Delegate of the Regional Government, Sandra García, the Director of the Council of the Alhambra, Mar Villafranca, the artistic director of the ballet company, Rafaela Carrasco, the flamenco singer José Enrique Morente and the Director of the Andalusian Institute of Flamenco, María Ángeles Carrasco.
The Delegate of the Regional Government stated that “the Regional Government of Andalusia is a strong supporter of culture, the region’s finest business. We have the talent here already. All we have to do is to design products like this one, the Lorca and Granada programme, which has become one of the most important at a regional level as a creator of wealth, for tourism and for the hotel and catering sector”.
Sandra García said that “this new show will be successful not only in artistic terms, due to its quality, but also in an economic sense in that it will attract tourists to the city of Granada. It also offers another opportunity for those from outside Spain to get to know us better. Every year this show is attended by many people from other countries, who later pass on what they have seen and experienced, so projecting an image of Granada and Andalusia that goes far beyond our frontiers”.
The show entitled ‘En la memoria del cante: 1922’ is inspired by the famous flamenco singing competition that took place that year in Granada. This event became a landmark in the history of flamenco in that it elevated this unique combination of music and dance to the status of an art-form, after previously being disdained by Spain’s intellectual elite as an inferior form of expression from the rougher quarters of its cities. The show uses dance to commemorate some of the greatest singers in the history of flamenco and to praise the work of some of the great personalities from the world of art and culture who organized this event, including Manuel de Falla, Ignacio de Zuloaga and the young Federico García Lorca. The event also enjoyed the backing of intellectuals such as Joaquín Turina, José María Rodríguez Acosta, Juan Ramón Jiménez, Pérez de Ayala, Santiago Rusiñol, Óscar Plá and Fernando de los Ríos, among many others who signed a manifesto in support of flamenco.
This choreography of the Ballet Flamenco de Andalucía was first performed in the Gran Teatro in Córdoba in January and has toured in various provinces of Andalusia, Madrid and other Spanish theatres. The flamenco singer, José Enrique Morente, has decided to join the show for the event in Granada which every summer so brilliantly unites the triangle formed by Lorca, Granada and Flamenco. Other additions include new stage scenery and audiovisual features and an enlargement of the dance troupe.
The figure of Federico García Lorca, whose plays and poetry are well-known throughout the world, combined with the evocative power of flamenco have come together in a formula that expresses almost to perfection the cultural potential of Andalusia: the Lorca-inspired flamenco event staged annually in the Generalife has developed into an excellent medium through which foreign visitors can discover the creative excellence of our region and local people can identify with the work of their best-known artists. The shows in previous years have been staged by such famous names as Antonio Gades, Mario Maya, José Antonio, Pepa Gamboa, Blanca Li, Cristina Hoyos, José Carlos Plaza, Eva Yerbabuena, Rubén Olmo, Fuensanta “La Moneta” and Manuel Liñán. This year it is the turn of Rafaela Carrasco, who also took part in the event 10 years ago with a show entitled “Los Caminos de Lorca”.
Tickets for the performance will go on sale on the 26th May on the following website: www.juntadeandalucia.es/culturaydeporte/lorcaygranada and can also be purchased by telephone at 902 55 78 61 and at the ticket office of the Teatro Isabel La Católica (a theatre in the centre of Granada). From 14th July onwards they will also be available at the Alhambra ticket-office in the Generalife.