Granada, Destination of Artists to include Bacarisas’s View of the Alhambra 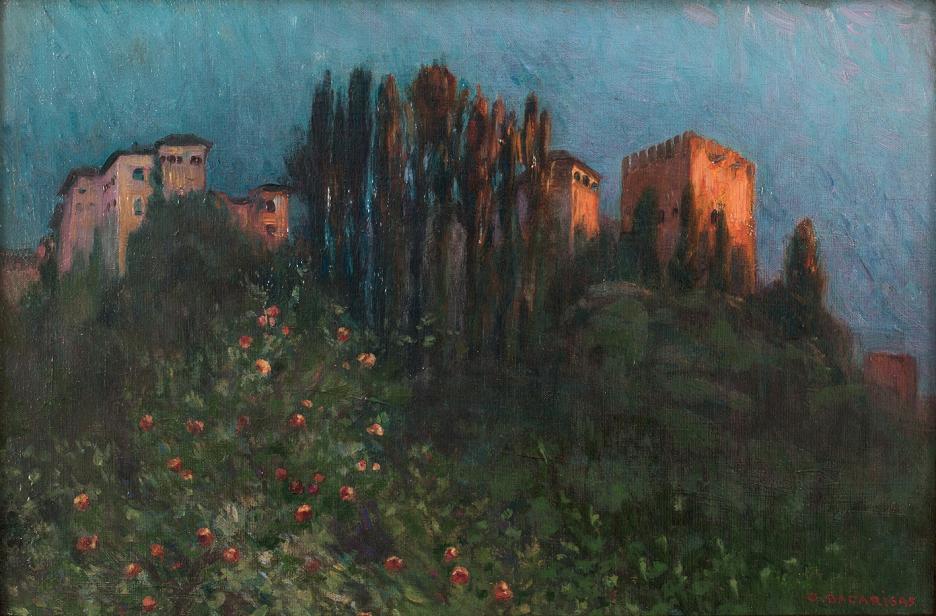 Exhibition open until 29 January at the Museum of Fine Arts, upper floor of the Palace of Carlos V

The exhibition Granada, Destination of Artists is to include the View of the Alhambra by Gustavo Bacarisas (Gibraltar, 1872 – Seville 1971), recently acquired by Patronato de la Alhambra y Generalife (PAG). The exhibition runs until 29 January in the Granada Museum of Fine Arts, on the upper floor of the Palace of Carlos V. This new addition to the PAG collection joins his Fountain of the Lions, held by PAG in the Ángel Barrios Museum.

The link between Gustavo Bacarisas and the Alhambra is well-known and is testified to by the artist’s signature on the appointment, on the proposal of Santiago Rusiñol, of Antonio Barrios, owner of the El Polisario tavern, as Consul for Art to the Alhambra from 1909 to 1910, about the time when his View of the Alhambra would have been painted.

Gustavo Bacarisas was an acclaimed Andalusian artist, born in Gibraltar but settled in Seville. His work progressed from his early colourist, intimist phase, to which this work belongs, to his artistic culmination, embodied in his Seville in fiesta, now in the Seville Museum of Fine Arts, an example of finely-detailed contemporary costumbrism, characterised by the rich use of colour.

The exhibition Granada, Destination of Artists is being hosted by Granada Museum of Fine Arts as part of the Guest Piece programme, held in collaboration with other institutions and private collections. The show is made up by a selection of works from the Patronato de la Alhambra y Generalife fine arts collection, some never before shown and recently included in the collection.

Thanks to the collaboration between PAG and the Museum of Fine Arts, Room VI of the Museum now holds a selection of works featuring the Alhambra from the Alhambra collection, including Plaza de los Aljibes de la Alhambra (1833), by John Frederick Lewis (1805-1876), Alhambra (1910), by Aureliano de Beruete y Moret (1845-1912), Arabs in a courtyard, by François Antoine Bossuet (1800-1889), La Alhambra (1932) by Ismael de la Serna (1895-1968) and The Palace of Carlos V by Santiago Rusiñol i Prats (1861-1931), and the aforementioned View of the Alhambra by Gustavo Bacarisas (1872-1971), in addition to other paintings featuring Granada from the Museum’s permanent collection.

The paintings are a fair reflection of the fascination exercised by Granada, in general, and the Alhambra, in particular, over artists, particularly the romantic travellers, continuing throughout the 19th century and much of the 20th, and including such well-known artists as Fortuny, Sargent, Sorolla and Matisse, to whom PAG dedicated a monographic exhibition from October 2010 to February 2011.