‘From Earth to the Universe: the beauty of the evolution of the Cosmos’ comes to the Alhambra 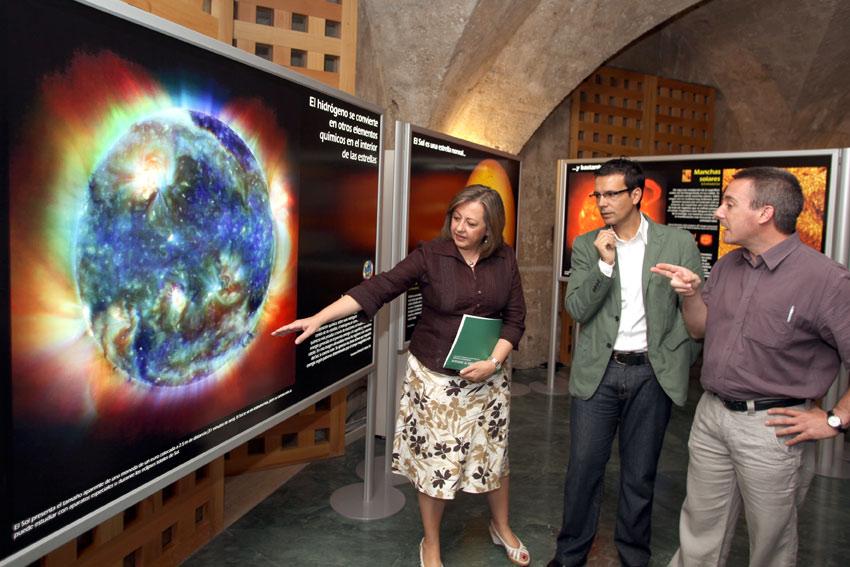 The exhibition ‘From Earth to the Universe’ has been inaugurated today by the delegate of the Andalusian Ministry for Science and Innovation in Granada, Francisco Cuenca, the director of the Patronato y el Generalife, Maria del Mar Villafranca, and the exhibition curator, David Galadí. The exhibition, on display until August 31, 2009, in the Crypt of the Palace of Chalres V, is a fundamental project of the International Year of Astronomy. With a collection of images offered by the International Astronomical Union, the Red de Espacios de Divulgación Científica y Técnica de Andalucía has prepared this exhibition, that shows on 44 panels a new and more detailed vision of Astronomy.
This display, financed by the Council for Science and Innovation, has been organized by the Red de Espacios de Divulgación Científica y Técnica de Andalucía with the support of three of their partners: the Real Instituto y Observatorio de la Armada in San Fernando in Cadiz, the Centro Astronómico Hispano Alemán, A.I.E. Observatory of Calar Alto in Almeria and the Centro de Ciencia Principia in Malaga, as well as the special support of the Patronato de la Alhambra y el Generalife.
Two display versions have been made: one of them called Platinum, large-sized, which is the one placed in the Alhambra, and on the other hand a lighter version, called Silver, that will travel through Andalusian villages under the Provincial Councils during 2009 and 2010. In addition, it is possible to enjoy a virtual version of the exhibition in www.cienciadirecta.com.
There are two collections of the Platinum version, one of them is placed at present in the Casa de la Ciencia (CSIC) in Seville, after having been on display in Jerez de la Frontera and Malaga.
While on display in the Palace of Villavicencio in Jerez, from March 16 to April 26, 2009, 10120 persons have been visiting the exhibition; in Malaga, the exhibition took place in the Train Station Maria Zambrano-Vialia, between May 19 and June 19, and visited by more than 1 million persons, according to the information by Adif.
On the other hand, the virtual exhibition had more than 18500 visitors since it started; more than 12000 of them have participated in the micro-experience “Find your Star”, having located more than 17700 stars.
In autumn, the exhibition will travel to Almeria, Jaen and Huelva, and finally to Cordova, in the Patio Barroco of the Council office (Diputación), where it will be opened to the public during December and the first fortnight of January.
The intention behind the celebration of the International Year of Astronomy is to offer to the public an approach to the historical and the up-to-date science, which has changed our vision of the world and the position of human being in it. The Patronato de la Alhambra y el Generalife presents the exhibition of astronomical images, dedicated to the beauty and the evolution of the Universe, by means of which it pays a homage to more than thousand years of astronomy in Andalusia: past, present and future or, in one word, evolution, within reach of all public.