Free entrance every Saturday to the Dar al-Horra Palace, the Bañuelo Arabic Bath and the Horno de Oro Morisco House. 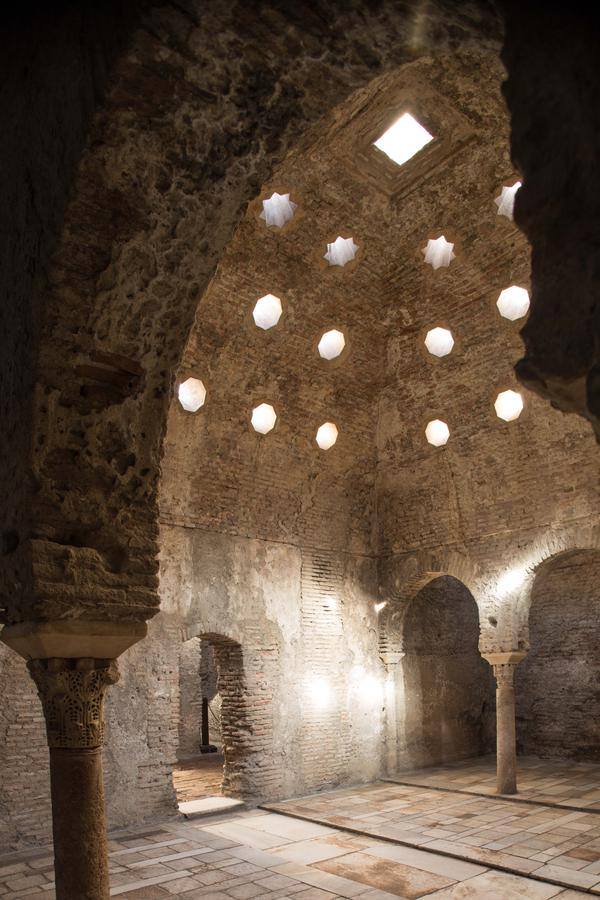 For all visitors to these spaces, which have been managed by the Council of the Alhambra and Generalife since 2012
The Dar al-Horra Palace, the Bañuelo Arabic Bath and the Horno de Oro Morisco House, Hispano-Muslim monuments managed by the Council of the Alhambra and Generalife since 2012, can be visited free of charge every Saturday at the following times: from 1st April to 14th September from 9:30-14:30h and 17:00-21:00h; and from 15th September to 31st March from 10:00-17:00h.
The Bañuelo is one of oldest, best conserved Arabic baths in Spain. It is on the Carrera del Darro in Granada opposite the remains of the Bridge of the Cadí, and was built in the eleventh century during the Zirid Taifa era. The bath is covered by small domes with octagonal and star-shaped skylights, which provide light and ventilation, creating a soft-lit, cosy atmosphere.
The Horno de Oro Moorish House is in the Axares District and was built at the end of the 15th Century. It has a rectangular courtyard with a pond and arches in the Nasrid style that support a porticoed gallery constructed during the Christian era. At the entrance to the south-facing room on the top floor there are original plasterwork arches with tacas (niches) and a splendid ceiling frame made of painted wood.
The Dar al-Horra Palace is in the Albaicín district, the centre of Muslim Granada and the seat of the Zirid Kings. Dar al-Horra means “House of the Honest Lady” and was the last residence of Queen Aixa, the wife of the Sultan Muley Hacen, the parents of Boabdil, the last King of Granada. The building has a central courtyard with a pond, around which the different rooms are laid out, and two porticoes on the shorter sides. Together with the gardens, the intricate inscriptions carved in the plasterwork make this space truly special.
Together with the Corral del Carbón these three spaces are part of the Dobla de Oro (Golden Doubloon) visit, a cultural tourism itinerary through the Alhambra and Granada’s World Heritage sites. This itinerary, which is organized by the Council of the Alhambra, was launched last spring thanks to an agreement with other institutions. In addition to these four spaces, the Dobla de Oro also covers the Casa de Zafra and the Casa del Chapiz, which are run by Granada City Council and the Spanish Research Council (CSIC), respectively.
For more information, please visit www.alhambra-patronato.es