‘Forests of the World’ exhibition reaches the Alhambra 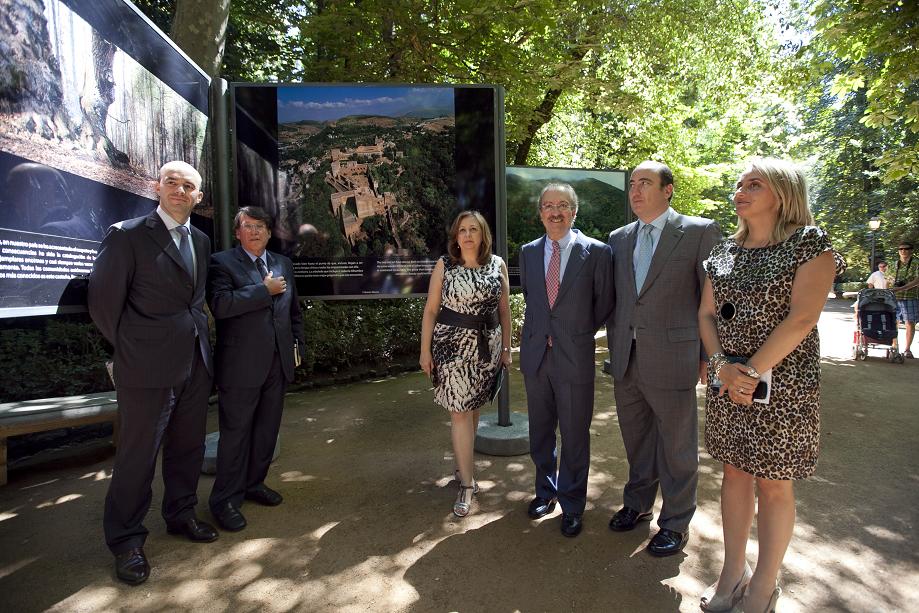 Forests of the World will remain on show until 15 October, along the central walk of the Alhambra Woods

To celebrate the International Year of Forests, Fundación AXA is sponsoring Forests of the World, an outdoor exhibition held all summer long in Granada’s Alhambra Woods. The exhibition was produced by Lunwerg Editores, in collaboration with Patronato de la Alhambra y Generalife (PAG) and commissioned by naturalist Joaquín Araújo, and consists of a selection of photographs of spectacular forest landscapes from around the world, captured by some of the world’s best photographers. A tour of the panels installed throughout the Alhambra Woods gives a brief, but complete and inspiring look at the different types of forest that cover the surface of the earth, animal and plant diversity and the problems and challenges facing our forests.
Forests of the World will remain on show until 15 October, along the central walk of the Alhambra Woods. It is divided into three thematic areas:
Key achievements in the history of life: the world’s forests and wildlife: describes some of the major forests from around the world, with their diverse ecosystems, showcasing elements of their unique flora and fauna.
Ravaged forests illustrates how approximately one third of the world’s forests have disappeared since the advent of agriculture, and particularly over the past 200 years. Every day, almost 20 million trees are chopped down or burnt down in the world.
Lastly From desert to forest shows images of the ongoing fight to preserve our few remaining virgin forests, and praises the coherent and sensible approach taken by certain organisations. In some Old World countries wooded areas are actually beginning to increase.
Javier de Agustín, CEO of Grupo AXA España and executive vice president of Fundación AXA, underlined the importance of “giving support to actions such as this exhibition, which, once again, maintain our commitment to culture and to sustainable development. Preservation of and respect for our forests contributes not only to the sustainability of the environment, but are also essential with regard to eliminating poverty and attaining the development goals for the Millennium”.
For María del Mar Villafranca, general director of PAG, holding the exhibition in the Alhambra Woods is a means of “strengthening relations with Fundación AXA, as this is the third exhibition they have collaborated. This is the largest green zone available to the people of Granada, and the Alhambra Woods contribute to our enjoyment of our heritage, providing a buffer zone between the city and the Alhambra”.
Using a selection of 72 forceful photographs, the exhibition promotes awareness of the importance of forests in the chain of life and, in the words of Joaquín Araújo, “as the best remedy against global warming, desertification, the sixth massive extinction of species, the scarcity of water and, it goes without saying, the progressive destruction of our natural environment”.
“We need forests. Not only because they are the source of thousands of necessary medicinal products, not only because they are host to teeming, irreplaceable life systems, not only because they act as a barrier to desertification, not only because they, too, are part of the water cycle and other cycles involved in the maintenance and continuance of life on our planet, but also because they are where we come from and they are the best economic model we could follow – the forests are consumers too, but largely consumers of their own produce and, accordingly, never exhaust their own resources. We humans need more than just more forests – we need forests of forests,” he added.
Curator
Joaquín Araújo, curator of the exhibition and author of Bosques del Mundo, is a naturalist and an ecological farmer and forester. He is also a writer, journalist and editor, member of the Real Academia de las Letras y de las Artes de Extremadura; director, producer, writer and presenter of television series, documentaries and radio programmes. He has personally planted some 22,000 trees. Among his awards feature the United Nations Environmental Programme’s Global 500 Roll of Honour (1991); two National Environmental Awards (1991 and 1997), the BBVA Award for the Best Educational Programme on Biodiversity, the Gold Medal of Extremadura and the Fundación BBVA Award (2006).