Experts will debate in the Alhambra about architecture, art and urbanism of the Islamic Granada 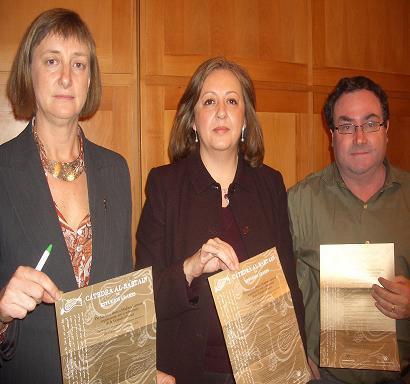 The Alhambra will receive, from January 29 to February 20, the course, ‘De Madinat Ilbira a Madinat Garnata: arquitectura, arte y urbanismo de la Granada islámica’ (‘ From Madinat Ilbira to Madinat Garnata: architecture, art and urbanism of the Islamic Granada ‘). Experts of diverse areas of knowledge will debate over this period of history of the city, from the first settlement in Sierra Elvira up to the movement and consolidation in the current enclave. The conferences complement each other with visits to the places exposed in the topics. The chair Al-Babtain of Arabic Studies, assigned to the Vicerrectorado de Relaciones Internacionales (Vicerectorship of International Relations) of the University of Granada, organizes the event.
During the presentation, the principal of the Monument of the Alhambra y el Generalife, María del Mar Villafranca, has stood out the importance of the course, since it discovers his participants, “the keys for the compression of the cultural values of the Alhambra”. In addition, she has praised the methodological orientation of the course, based on the Institución Libre de Enseñanza (Free Institution of Education).
María Ángeles Navarro, director of the course and the coordinator José Miguel Puerta Vílchez where present at the act. Jose Miguel Puerta Vílchez, indicated that the program tries “to underline the artistic and patrimonial values of urban spaces and andalusíes buildings previous to the Granada nazarí. Furthermore, it will offer a major knowledge and diffusion of eight centuries of Islamic culture of Granada, with a view to the celebration of the first millennium of the Kingdom of Granada “.
The course aim at tourist guides and university students, it is divided in five modules. The first one, ‘Madinat Ilbira and the urban configuration of the Islamic Granada’, will begin on Thursday, the 29th of January, at 18:00 h, with the conference of the teacher and Arabist, Emilio de Santiago, titled ‘From Madinat Ilbira to Madinat Garnata. The Islamic Granada opposite to the celebration of the millennium (1013-2013)’. On the following morning there will be a visit to the deposit of Medina Elvira. The assistants will know, with the explanations of the professor of Medieval History of the University of Granada, Antonio Malpica, the urban structure and the culture that developed in the city.
The second part of the course will penetrate into the Granada of the 11th century, since it was established as the capital of the state zirí, up to the Almoravid and Almohade period. The city during the Nasrid Kingdom will centre the third module. The course will dedicate special attention to the Monumental Complex of the Alhambra. The director of the Patronato de la Alhambra y el Generalife, María del Mar Villafranca, will initiate, on the 4th of February, this fourth phase of the course, with the conference ‘patrimonial, artistic and tourist Values of the Alhambra. Between the conservation, the knowledge and the enjoyment of the monument’.
Finally, the experts will insist in the andalusíes traces of the habitat of Granada. Visits will be made, between others, to the Arabic and Moorish houses of the Albaicín, as well as conferences as ‘ The Mudejar Granada’, of the professor of History of Art of the University of Granada, Rafael López.