Eva Yerbabuena, star of the Lorca and Granada in the gardens of the Generalife programme 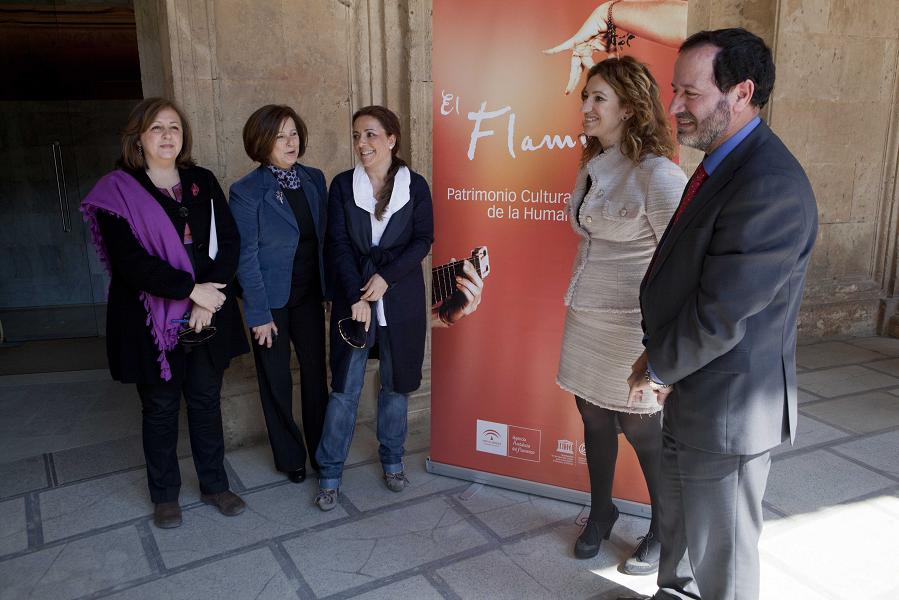 Tickets for the show, running from 20 July to 28 August, will go on sale on 30 April

Dancer Eva Yerbabuena will be the star of the 11th edition of the Lorca and Granada in the Gardens of the Generalife programme, with the show Federico according to Lorca, which will also be the highlight of the Granada International Festival of Music and Dance on 12 July next. María José Sánchez, regional government delegate in Granada opened the show, which will run from 20 July to 28 August at the Palace of Carlos V, along with María del Mar Villafranca, general director of Patronato de la Alhambra y Generalife (PAG), Pedro Benzal, Government of Andalusia cultural delegate in Granada, and María Ángeles Carrasco, director of the Andalusian Agency for the Development of Flamenco.
Eva Yerbabuena, who describes her participation in the programme as a “dream come true”, has not wanted to reveal details of the choreography and recognises that the show is a “challenge” and that it keeps her awake at night. “Lorca’s world is so immense that you can get lost in it. I go to bed at night surrounded by his works, as if they were the bible. His work is always with me, guiding me, inspiring me.”
Federico according to Lorca, written and directed by Eva Yerbabuena, with scenery by Vicente Palacios, will feature a large cast of singers, dancers and musicians, including guitarists Paco Jarana, who also composed the music for the show, and Manuel de la Luz; the voices of Enrique “el Extremeño”, José Valencia and Pepe de Pura; Manuel José Muñoz “Pájaro” and Raúl Domínguez on percussion, and dancers Mercedes de Córdoba, Lorena Franco, María Moreno, Eduardo Guerrero, Fernando Jiménez and Alejandro Rodríguez.
María José Sánchez explains that, “Lorca and Granada in the Gardens of the Generalife is a cultural reference in the city and in the community, as shown by its 10 years of existence and over 400,000 spectators. This year, the bar is set very high again with Eva Yerbabuena, who is a guarantee of success”.
Similar praise came from María del Mar Villafranca and Pedro Benzal, for whom initiatives such as Lorca and Granada in the Gardens of the Generalife “contribute to the cultural development of Granada and Andalusia. This show could not be presented at a better moment, with the Festival of Music and Dance celebrating its 60th edition and Flamenco having been declared an Intangible Cultural Heritage of Humanity”.
María Ángeles Carrasco was proud to see “Flamenco and Federico García Lorca together once more in the Gardens of the Generalife, this time with Eva Yerbabuena, an artist whose dancing is poetry”.
Tickets will go on sale on 30 April next, at €30 each, although other pricing systems will be available, such as a combination with a visit to the Gardens of the Generalife to see the sunset one hour before the show begins.