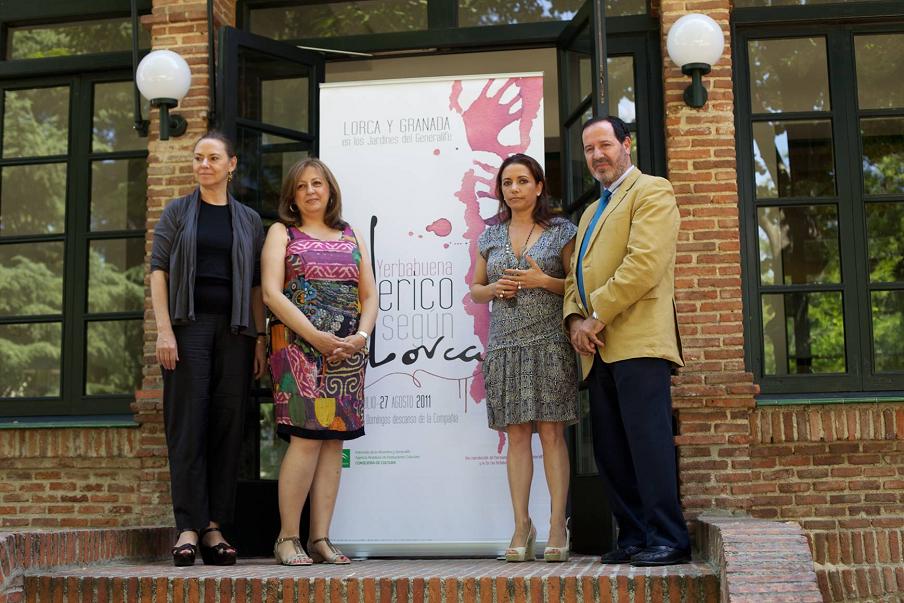 Over its 10 years of existence, Lorca and Granada in the Generalife Gardens has become a cultural point of reference that transcends Granada

Choreographer and flamenco dancer Eva Yerbabuena headlines the 11th edition of the Lorca and Granada programme running from 20 July to 27 August in the Generalife Gardens, with the show Federico according to Lorca, which will also close the 60th edition of Granada’s International Festival of Music and Dance on 12 July next.
On Wednesday 29 June, Eva Yerbabuena and Patronato de la Alhambra y Generalife (PAG) presented the new show at Madrid’s Residencia de Estudiantes, the cultural institution once home to Federico García Lorca and many of the important figures of his generation.
Present also were María del Mar Villafranca, general director of PAG; Pedro Benzal, Government of Andalusia cultural delegate in Granada; Alicia Gómez-Navarro, director of Residencia de Estudiantes, and Laura García Lorca, chair of Fundación García Lorca.
Federico according to Lorca, the 9th show produced and choreographed by Eva Yerbabuena (National Dance Award, 5 Max Theatre Awards, among others) is co-produced by Patronato de la Alhambra y Generalife (PAG) and Eva Yerbabuena Ballet Flamenco, with the support of the Government of Andalusia Ministry for Culture through the Andalusian Agency for Cultural Institutions. It explores the life of Federico, the person, through the rich nuances of his work as Lorca, spun by the dancer into an intimate journey to childhood and to a place deeply entwined in their lives, the Granada which coloured them with its indelible mark. The show also counts on the voice of actor Juan Diego, in a gratifying special collaboration.
Yerbabuena buzzes with excitement about her reencounter with Federico García Lorca, “the show has helped me to a deeper understanding of Federico, not just as a writer, but as a person. For me it is a dream come true to play the Generalife as a channel for the life and work of Federico García Lorca”. According to Villafranca, “Federico according to Lorca is Yerbabuena at her best. What’s more, the show couldn’t have been premiered at a better time, on the 60th anniversary of the Festival of Music and Dance and with flamenco having recently been declared Unesco Heritage of Humanity”. Benzal considers that initiatives such as the Lorca and Granada programme “contribute to the cultural development of Granada and Andalusia”.
Federico according to Lorca is dynamic and eclectic, a pulsating blend of tradition, passion, intimacy and technical innovation, infused by the music of Paco Jarana, who takes from other musical traditions while remaining recognisably flamenco. Complex yet direct, it follows the search for the soul of the person, Federico, as glimpsed through the works of the great writer.
Over its 10 years of existence, Lorca and Granada in the Generalife Gardens has become a cultural point of reference that transcends Granada, while remaining firmly rooted there, and has been enjoyed by over 400,000 spectators from all over the world. Over the years, the programme has showcased the talents of many internationally-renowned flamenco artists, including Antonio Gades, Mario Maya, Cristina Hoyos and Blanca Li.
For the 10th edition of the Lorca and Granada programme, PAG has introduced a series of new features, including the combined Federico según Lorca and Generalife gardens and palace ticket. PAG has reserved a daily quota of 500 combined tickets for group visits, which run from 20.30 to 22.00, when the show starts. A perfect occasion to experience the charm of the Generalife at a magical time of evening.
The tour covers some of the most emblematic areas of the Generalife site, at a magical time of evening, and there will also be a bar service to make the visit more enjoyable. Another new feature offered is the option of buying tickets in advance up to 19 July, with a 33% discount (reduced from €30 to €20).
Tickets can be bought from El Corte Inglés and Hipercor, the Generalife ticket offices, and during June also from Isabel la Católica theatre ticket office, by phone on (+34) 902400222 or through www.elcorteingles.es.
Further information at (+34) 958028000 and info.lorcaygranada@juntadeandalucia.es.