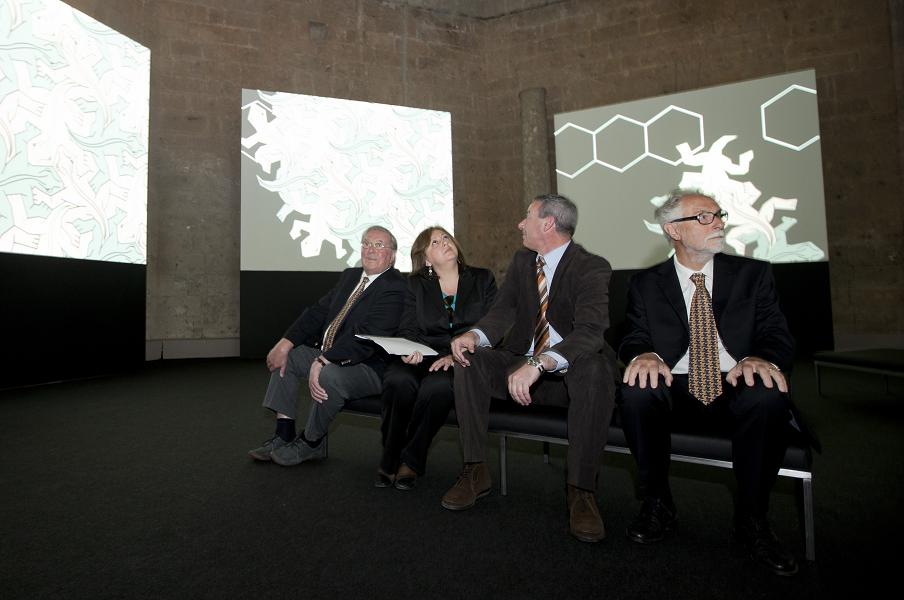 The Alhambra and Granada Science Park host an exhibition on the life and work of M.C. Escher

M.C. Escher. Infinite Universes is an exhibition organised by the Patronato de la Alhambra y Generalife (PAG) and Granada Science Park, to commemorate the 75th anniversary of the Dutch artist’s visit to the Alhambra, to him “the richest source of inspiration” that he had ever tapped. “This morning I was in the Alhambra. I fully enjoyed this sublime and aristocratic work of art. This evening I returned again and started copying the maiolic ornamentations”.
75 years ago, Maurits Cornelis Escher wrote this note in his travel diary after his second and final visit to the Alhambra in 1936; his first had been in 1922. So captivated was he by the Nasrid fortress and palace, that it marked a before and after in his artistic trajectory, now characterised by his fascination with mathematics, architecture and perspective. M.C. Escher, Infinite Universes, running from today until 29 February 2012, sees his return to Granada, in an exhibition which, in true Escherian style, showcases his work at two spaces simultaneously: the Alhambra and Granada Science Park.
The exhibition, an original idea commissioned by Borja Ferrater, Juan Domingo Santos and Carlos Ferrater, gives the visitor a vision of the artist’s internal world and his most important works, tracing a route through his imaginary worlds, from the faithful reproduction of natural elements to the manipulation of reality by means of optical illusions and impossible figures. The exhibition is composed of a total of 135 original works from the M.C. Escher Foundation, including popular pieces such as Print Gallery, Drawing Hands, Sky and Water, Moebius Strip and Metamorphosis II.
In true vanguard style, M.C. Escher. Infinite universes invades and takes over the Alhambra and the Science Park, adding to Escher’s works other artistic elements, such as a mobile installation which recreates Sky and Water, Magical boxes that transpose the visitor into the artist’s infinite worlds by means of kaleidoscopic optical illusions that multiply images endlessly, the Windows of the Alhambra, connecting opposing worlds, and an audiovisual montage in the Chapel of the Palace of Carlos V.
Organised by PAG, Granada Science Park and the M.C. Escher Foundation, the exhibition has its own website, www.eschergranada.com, set up to allow visitors and other fans of the artist to approach Escher’s work, and to provide information on Granada and the two exhibition venues.
The Alhambra part of the exhibition is organised into three sections: Travels to Spain, Escher and the Alhambra, and Audiovisual. The first section deals with the period from 1921, when Escher first visited southern Europe, to 1936, and includes copies of the notes he made on the Alhambra and over 10 works depicting the landscapes he enjoyed in Spain and Italy.
Escher’s fascination with the Alhambra is the subject of the second section.  Escher spent many days studying and sketching Islamic tile patterns, leading him to reflect on regular divisions of the plane, repetition, impossible figures and complex perspectives.
Lastly, the third section, at the Chapel of the Palace of Carlos V, uses almost a dozen audiovisual pieces to create a documentary on the life and work of the artist.
The Science Park part of the exhibition starts off with a section on Escher’s Figurative Period. This period, 1917 – 1937, is represented here by 13 essential early works, including Grasshopper and Portrait of a Bearded Man. The next section, Natural and Artificial Landscapes: the Mediterranean, comprises 38 works, including The Drowned Cathedral and Covered Alley in Atrani, showing the impact of his travels through southern Europe.
Metamorphosis, the third section, covers 17 works, including Escher’s masterpiece Metamorphosis II, in which he plays with geometric division; while in Crossed Worlds the viewer discovers impossible worlds and unfeasible spaces, as in Drawing Hands and Three spheres.
The spirals, spheres and other geometrical forms that Escher used to project three-dimensional spaces onto a flat surface take centre stage in the section Three-dimensional Shapes and Mathematics, which includes the works Depth, Rind and Bond of Union. The sections on Geometrising the Plane and Perspectives and Architecture finish off the visit.
The exhibition also includes an art and geometry workshop, where participants can design mosaics and tessellations, use mirrors to find axes of symmetry and create infinite worlds using kaleidoscopes.