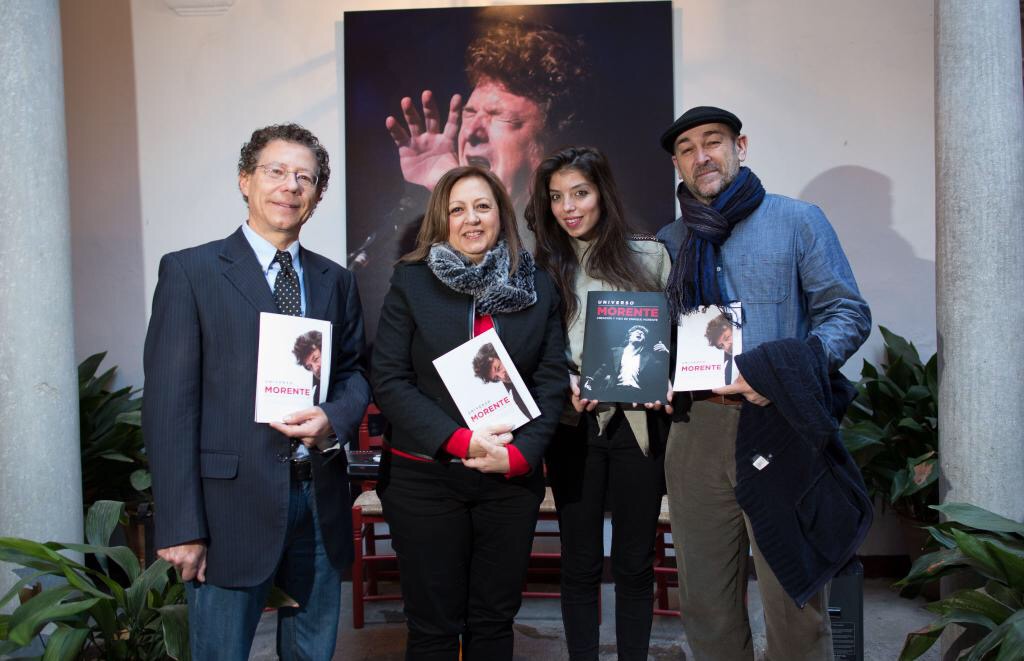 The cinematographic side of Enrique Morente (Granada, 1942-Madrid, 2010) is the central theme of the cycle of films that the Alhambra and the Musical Documentation Centre of Andalusia (MDCA) are devoting to the Maestro as part of the Universo Morente

The cinematographic side of Enrique Morente (Granada, 1942-Madrid, 2010) is the central theme of the cycle of films that the Alhambra and the Musical Documentation Centre of Andalusia (MDCA) are devoting to the Maestro as part of the Universo Morente, a “wide-ranging, multidisciplinary project in which art, performance, music, words and poetry come together to display the legacy of the flamenco singer from Granada, Enrique Morente, one of Andalusia’s most universal artists”.
This morning, the Director of the Alhambra and Generalife, María del Mar Villafranca Jiménez, and the director of the MDCA, Reynaldo Fernández Manzano, visited the Centre to announce the programme for this cycle of films, which has been organized as an “extension of the exhibition” being held at the Granada Fine Arts Museum on the upper floor of the Palace of Charles V, which is curated by Amaranta Ariño and has so far been visited by 20,707 people, an average of 334 visitors per day.
“Visitors to the Musical Documentation Centre of Andalusia will have the chance to continue finding out more about Enrique Morente. They will enjoy a documentary extension to the Universo Morente exhibition, which will undoubtedly complement it perfectly and enable them to catch a better glimpse of one of the most important artists ever to come out of Granada”, Villafranca explained.
In the exhibition at the CDMA, in the Carrera del Darro, nº 29 de Granada, visitors can see photos of Morente with his family, friends and fellow musicians and at tributes and performances, along with over 35 hours of interviews, concerts and videos never previously exhibited by Manuel Montaño, Paco Manzano, Imelda Ferrer, Luis Mengs, Pepe Zapata and Joaquín Aneri. Those interested will also be able to immerse themselves in the discography of Enrique Morente and in his collaborations with other musicians. They will also be able to consult the various books about this great singer, in preparation for the Film Cycle in which all the films and documentaries about him will be screened.
The films that will be shown at the Musical Documentation Centre of Andalusia include Enrique Morente, un buen aficionado (a good amateur), by Luis Morales; Enrique Morente, buscando miradas (looking for views), by Onésimo Samuel Hernández; Un concert a emporter/ A take away show #116 (Andalusing in the Bañuelo in the Albaicín), a French film from 2010 directed by Vincent Moon; Currito de la Cruz, Alejandro Pérez Lugín; Tan cerca y tan lejos (So near and so far). La Orquesta Chekara and flamenco, a documentary directed by Pepe Zapata; Flamenco, by Carlos Saura, and Estrella Morente, Casacueva y escenario (Estrella Morente, Cavehouse and stage) by José Sánchez-Montes.
Together with these films, they will also be screening others, on which Enrique Morente “left his unmistakable mark”, including Morente sueña la Alhambra (Morente dreams about the Alhambra), filmed by José Sánchez-Montes in 2005; Morente (El barbero de Picasso – The barber of Picasso), by Emilio Ruiz Barrachina, a film of his last public performance in 2011, and Morente, la pasión (Morente, the passion), a film by Juan Verdú made in 2012, after his death.
Those interested in seeing any of these films, for which entrance will be free, can do so on Tuesdays and Thursdays at 16:00h and on Saturdays and Sundays at 12:00h and 16:00h at the Musical Documentation Centre of Andalusia. The Alhambra is also organizing free guided visits to the Universo Morente exhibition, for which it is necessary to book a place in advance at alhambraeduca.pag(at)juntadeandalucia.es