Did you know Andalusian crops are being grown in the Generalife gardens? 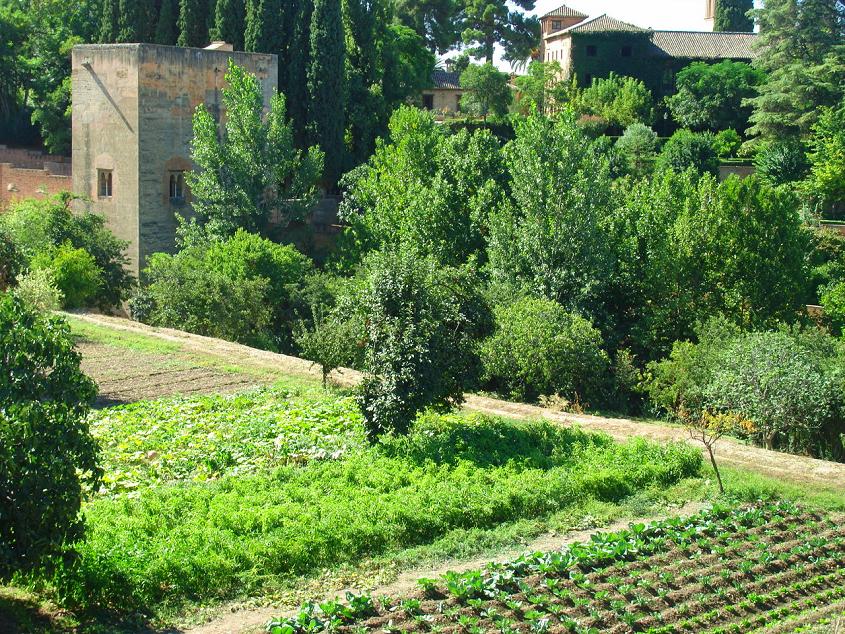 The gardens of the Alhambra are recovering the splendour of al Andalus. Since 2008, the Patronato de la Alhambra y Generalife (PAG) has been analysing and diagnosing the Generalife kitchen gardens for their development and promotion. Using a range of sources such as old archives, maps, pictures, literature, travellers’ descriptions and archaeological, soil and pollen studies, the project aims to recover the landscape, crops and flora of Mediaeval times, increasing understanding, attracting visitors and promoting the distribution and commercialisation of products associated with the Generalife kitchen gardens.
During the reign of the Nasrid kings, vegetables, pulses and fruits were grown in the gardens and surrounding areas to supply the court, reducing its dependence on other markets. One of the major contributions of the Arabs of al-Andalus was the introduction and propagation of species such as spinach, artichokes, watermelons, and pomegranate, white mulberry, peach and almond trees.
The Generalife (Yinan al-‘arif, the Garden of the Architect) gardens were situated on the lower slopes of the Cerro del Sol, to the north of the city of the Alhambra, from which they were separated by what is now known as the Rey Chico ravine. Overlooked by its own palaces, the Generalife was a summer garden or retreat of the Nasrid emirs. The Royal Water Channel, which traverses the gardens, along with a series of pools and other water features, made it possible to maintain extensive vegetable gardens, orchards and fruit trees and ornamental trees around the main Palace, with smaller gardens inside.
The site, originally walled almost all the way around, are organised into terraces supported by thick retaining walls, which have lasted over 700 years. The Royal Channel irrigated over seven hectares of gardens, some of which, including the Grande, Colorada, Mercería and Fuente Peña kitchen gardens, have been cultivated more or less continuously since mediaeval times.
The PAG is developing the project in conjunction with Córdoba University and the Higher Council for Scientific Research (CSIC) School of Arabic Studies (EEA).
Rafael de la Cruz. Manager of the Department of Gardens and Forests of the Patronato de la Alhambra y Generalife.