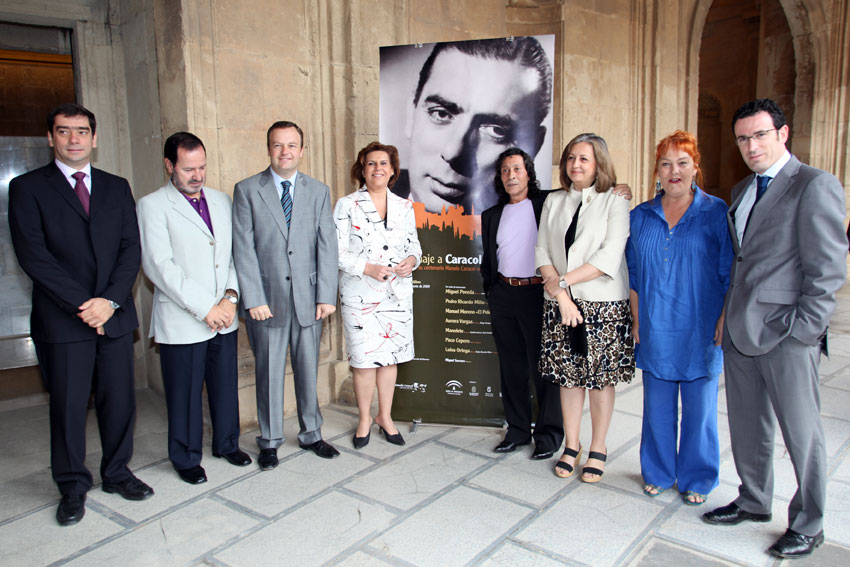 Manolo Caracol returns to the Alhambra in his Centenary Birth Anniversary. The Regional Ministry of Culture, by the Agencia Andaluza para el Desarrollo del Flamenco, has designed a recital as homage that commemorates an indelible date of the history of Flamenco: the night of June 12, 1922 when the only 13-years-old Niño Caracol was awarded with the first prize – the same as “Tenazas de Morón” – in the Flamenco singing contest Concurso de Cante Jondo organized by Manuel de Falla and Federico García Lorca, and others, during the Corpus Christi holiday in Granada.
In the recital will participate Cantaores (Flamenco singers) who have learned by Caracol, and its poster has been presented today by the Regional Minister of Culture, Rosa Torres, in the Alhambra, where she has emphasized that, after the contest of 1922, Caracol “would become one of the most shining stars of Flamenco singing; it was here, in Granada, where the legend was born”, said the Regional Minister. With regard to the participation of Luisa Ortega, daughter of the commemorated artist, Torres said that it is “the way most emotive and honorable concluding a homage that would not be understood without the family of the Cantaor”.
In such an important appointment, the Regional Ministry liked to have the collaboration of the institutions and companies from Granada: the City Council of Granada, the County Council, CajaGranada and Cervezas Alhambra have taken part in the organization of the event, where also was outstanding the support, commitment and implication of the Patronato de la Alhambra y el Generalife.
The importance of the event, the quality of the artistic cartel, as well as the historical value as Heritage of the selected location constitute a unique occasion for this unavoidable show. The artistic presence in the homage consists of the singing of El Pele, Miguel Poveda and Aurora Vargas; the dance art of Manolete, from Granada, and the art of the guitarist Paco Cepero and the piano of Pedro Ricardo Miño. The daughter of Caracol, Luisa Ortega, who accompanied his father to the stage in innumerable occasions, shares stage with him again in this occasion. The closing of the show will be in collaboration of this Star-Cantaora, who will be acting on stage accompanied by Pedro Ricardo Miño on the piano and Paco Cepero on the guitar.
The appointment will be next Friday, June 12, from 21:00 on in the Patio de los Aljibes in the Alhambra. The tickets for the show are already on sale, with 15 € ticket price. The tickets can be acquired in the ticket offices of the Teatro Alhambra (C/ Molinos, 56), one hour before every performance programmed up to the date, and in the ticket office of the Teatro Isabel la Católica (Acera del Casino s/n), 12:00 to 14:00 and 17:00 to 19:00.
The homage to Caracol in the Alhambra is part of the programmed activities that the Regional Ministry of Culture has prepared to commemorate the Centenary Birth Anniversary of Manuel Ortega Juárez, or Manolo Caracol. These are several initiatives during 2009 all over Andalusia. Last May, the Congress of the Anniversary took place in Seville and recalled the life and work of the Cantaor. The series all over the Andalusian area – Rutas Flamencas and Ocho Provincias – also are dedicated to the Anniversary. On the other hand, there was published a book on CD with unpublished sound records, and the magazine ‘La nueva Alboreá’ – edited by the Centro Andaluz de Flamenco – dedicated in the issue of May a supplement to the Cantaor.