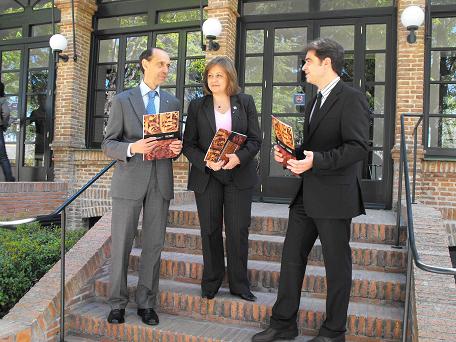 The vice-president of the Organization and Institutional Relations of the High Council of Scientific Research (CSIC), Francisco Montero de Espinosa, and the Director of the Patronato de la Alhambra y el Generalife, María del Mar Villafranca, have presented today, Thursday, in the Students’ Residence of Madrid, the first part of the study Epigraphic Corpus of the Alhambra. The project directed by the CSIC researcher Juan Castilla and promoted by the Patronato de la Alhambra y el Generalife, is a pioneers work that gathers more than 3,000 Arabic existing inscriptions in the Palace of Comares of the Alhambra. The researchers has compiled, studied and translated the Arabic epigraphs of this construction, which have been collected in a book and a DVD.
Castilla emphasizes this part of the research: “Besides the basic forms of Arabic writing, the cufica and the cursive one, in the Alhambra it also appears a third one, which we can name mixed, result of combining both previous ones. For its peculiarity, the Arabic writing was not only use in architecture for giving faith of obedience to Allah, furthermore, it was used as an ornamental function, because it was replacing as far as possible the plastic arts hardly promoted on those times by the Islam”.
The Arabic writing offers diversity of forms, though two fundamental types exist: the cufica and the cursive one. The first one developed in Kufa, current Iraq, in the 7th century. This forms of writing, also called kufi, began to have since then the consideration of sacred, because it was use for making the copies of the Koran. The cufica writing, though it was in use in the first moment for the confection of the sacred text, it was also used in another type of inscriptions and in another type of materials, like textile, ceramics or wood. It was used furthermore to perpetuate the king’s name and powerful people in the religious and civil constructions. Moreover, the cursive writing, also called nasji or scribe writing, replaced gradually the previous one since it was turning out to be easier to read.
The Arabic inscriptions of the Palace of Comares of the Alhambra collect in its majority the dynastic motto of the Nasrid epoch, Wa-la galib illa Allah (there is no winner higher than Allah, in its translation to the Spanish), besides there are epigraphs of diverse content: devouts, coranics, and others that emphasizes the king who was entrusted with the construction and some poems that makes reference to the own support of the inscription. “Many of the poems that we have studied emphasized the king in charged of the construction and recalls the attention on the excellences of the architectural elements that gives support to the own inscription. Possibly, there will be no other place in the world in which looking around walls, larders, columns and fountains is the same as turning the pages of a poems book”, stands out the CSIC researcher.
The ornamental projects
The poets of this period realized a work combining art and science. Under the king’s government, the poets, who were employed at the editorial office, started many of the decorative projects. These artists were in charge of designing the spaces where the poems would be recorded later, often written specifically for this construction, and in another occasions there were extracted from compositions done previously. Later, they did a constant follow-up of the development of the work and also a labour of controlling how the poems were recorded in stone, plaster or wood.
The Palace of Comares
“The construction of the Palace of Comares began in the 14th century under the Yusuf I kingdom. Due to diverse inscriptions assuming the authorship to his son, it is believed that it was his son Mohamad V the one who finished the work “, Castilla said. Yusuf I wanted that the decoration of the palace, which will turned into the official residence, made a big impression to the visitors, for what he ordered to be constructed and to be decorated in an exquisite way.