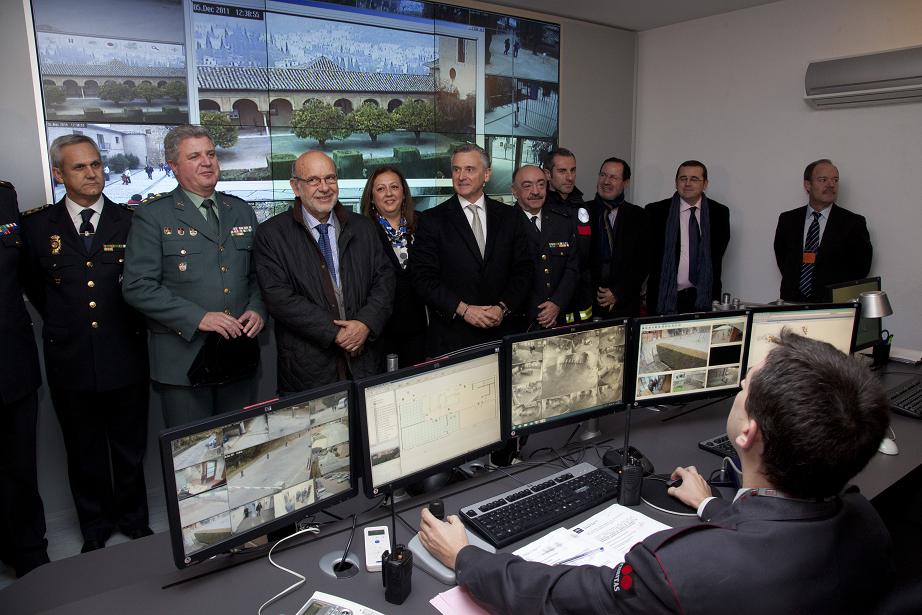 Works supervised by Government of Andalusia minister for Culture

The Alhambra is well on its way to being the safest monument in Spain, with the installation of a comprehensive state-of-the-art security system for the protection of persons, property and information. This assertion was made this morning by Paulino Plata, Government of Andalusia cultural delegate in Granada, in a visit to the site to supervise this innovative new system put in place to deal with emergency situations in the World Heritage. The installation of the system is one of the measures contained in the Master Plan for the Alhambra (2007-2015), the route map for the challenges to be met by the site in the 21st Century, as part of Strategic Line 2 (Sustainability) and 4 (The Alhambra in the Information and Knowledge Society).
Costing €1,800,000, the Comprehensive Security System will enable the management of monitoring, access control and autoprotection of visitors and personnel. According to Plata, “our obligation as managers of this site is to guarantee the security of a place that is visited by thousands of persons every day”.
To make this state-of-the-art security system a reality a new network of connections were installed using optic fibre and Wi-Fi connections. The most innovative features of the system include the possibility of resolving visitor incidents at access and egress control and the possibility of detecting emergencies befalling organised tour groups, using a time-saving personal location system.
The system will be coordinated from a Security Control Centre in the Huerta de Fuentepeña building, from where information received from the cameras installed throughout the site will be overseen and managed.
The Comprehensive Security System features the following elements:
– Closed circuit TV, with 85 cameras installed throughout the site, along with two video recorders and a videowall, for display of the images captured by the cameras.
– Access control: access and egress turnstiles and PDA readers.
– An intercom system
– Localisation: using wireless cards or tags carried by security monitors and tourist guides.
– Communications: a wireless optic fibre network, using WiFi and mobile technology.
– Intruder and fire detection system: alarm switchboard
Another of the new features of the plan is that it also guarantees the security of information for its authentication, confidentiality, integrity, availability and accountability, thus minimising the incidence and impact of failures, non-authorised access, leaks, vandalism and other security incidents.
For maximum operationality of the security system, Patronato de la Alhambra y Generalife (PAG) plans to set up an Advisory Board, made up of representatives of institutions that can contribute experience, knowledge and advice in the field of autoprotection, and who can intervene in the event of an emergency requiring the aid of specialised agents.
Likewise, a series of acclaimed professionals and businesses in the fields of security, autoprotection and prevention of occupational hazards, consultancy and new technologies were consulted with regard to the implementation of the new system, e.g. Simave Seguridad, Securitas Seguridad España S.A, Servitickets, BPP-INNOVES S.L, Novotec Consultores S.A, AREMAT S.L., Bados Navarro, Afersa, Global Retail, Novomedia, M.J. Cerrajeros, Construcciones Otero and Abel Bermúdez del Valle.