Art and cultures of al-Andalus, the debate 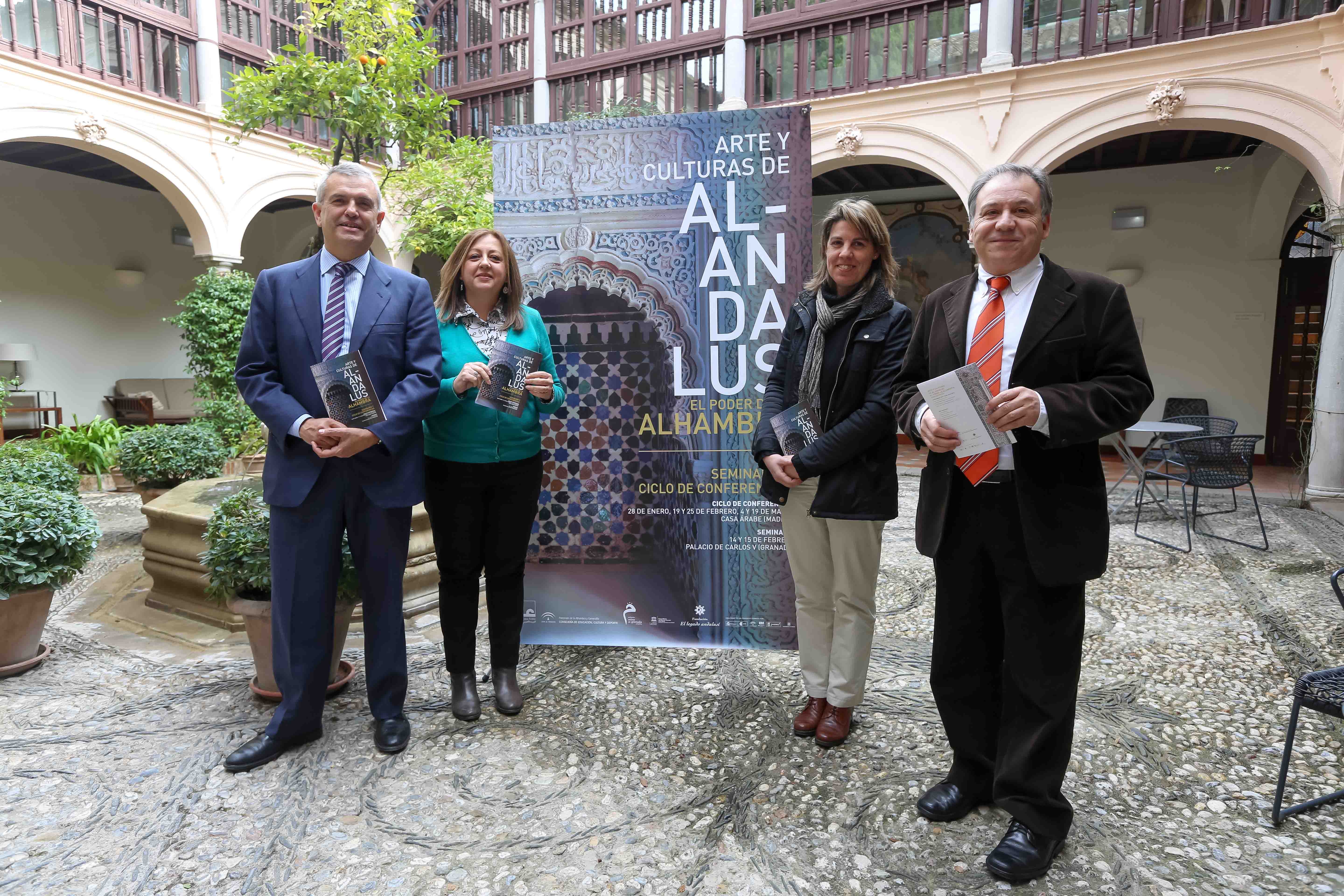 Al-Andalus and the 1000 years of the Kingdom of Granada (1013-2013) will be the subject of debate and reflection in the seminar and series of lectures organized by the Casa Árabe, in collaboration with the Council of the Alhambra and Generalife and the al-Andalus Legacy Foundation, as a grand finale to the exhibition Art and Cultures of al-Andalus, the Power of the Alhambra, on display since 2nd December in the Chapel and Crypt of the Palace of Charles V and several rooms in the Nasrid Palaces, fitted out especially for this exhibition, which has so far been visited by more than 50,000 people.
In order to portray the great achievements of al-Andalus between the 11th and 15th Centuries and the evolution of a wide range of art forms, various specialists will be presenting their scientific research during the course of this seminar coordinated by Rafael López Guzmán Professor of History of Art at the University of Granada. The aim will be to publicize the contributions made by this great culture, its survival and its symbolic and hallmark values.
The Director-General/President of the Casa Árabe, Eduardo López Busquets, presented the programme for the lecture series together with María del Mar Villafranca, the Director of the Council of the Alhambra and Generalife, and Inmaculada Cortés, Director of Culture at the al-Andalus Legacy Foundation. The lectures will be given at the Casa Árabe in Madrid, in Calle Alcalá 62, and admission will be free until all seats have been taken. The seminar will be held in the Palace of Charles V in the Alhambra and will also be free. Those interested in taking part must sign up beforehand by email to jornadas@milenioreinodegranada.es from where they will receive confirmation of their registration.
The series of lectures will be inaugurated at the Casa Árabe on 28th January with speeches by María del Mar Villafranca, the Director of the Council of the Alhambra and Generalife, and by Jesús Bermúdez, the Council’s Heritage Advisor, who will be talking about The Alhambra, History and Heritage.
Afterwards the debate will move to the Alhambra, where the Seminar Art and Cultures of al-Andalus will be held for two days, on the 14th and 15th February. This meeting with history will be addressed by the three curators of the exhibition, Rafael López Guzmán, Professor of History of Art at the University of Granada, Mª Jesús Viguera Molins Professor at the Department of Arabic and Islamic Studies at the Complutense University and José Miguel Puerta Vílchez, researcher and lecturer in History of Art at the University of Granada.
There will also be lectures from Antonio Malpica, Professor of Mediaeval History at the University of Granada, who will be tracing the path from Madinat Ilbira to Granada and from two researchers at the Granada School of Arabic Studies: Antonio Orihuela, who will be presenting his view of Granada between the Zirids and the Nasrids, and Antonio Almagro, who will be explaining the links between the Alhambra and other palace cities in the Islamic world. The Director of the Department of History of Art at the UGR, Ignacio Henares Cuellar, will also be giving a talk on the Alhambra as felt and represented.
And then from Granada back to Madrid, where on 19th February Rafael López Guzmán will be giving a lecture on the Artistic Relationships between Nasrid Granada and the Christian kingdoms. On 25th February he will then hand the baton on to Professor José Miguel Puerta Vílchez, who will introduce those attending to Written Culture in the Granada of al-Andalus.
The last two lectures will be given in March. The first by María Jesús Viguera will address the question of Societies and Cultures of al-Andalus and will be held on 4th March. The curator from the Victoria & Albert Museum in London will also be giving a talk entitled Collecting the Alhambra. The Exhibition “Art and Cultures of al-Andalus. The power of the Alhambra” focuses particularly on the Kingdom of Granada from the beginning of the 11th Century to the decline of al-Andalus in the 15th Century, in which the relations between the different cultures and territories overlap and intertwine.
Over 70 institutions have lent pieces for the exhibition plus a number of private collections. The exhibition is divided into various sections: From the Millennium: A look back at al-Andalus, in which we can see important artistic and cultural pieces from the 11th to the 15th Centuries such as the household treasures of Boabdil; Andalusian Granada which traces the development of the city of Granada and its infrastructures during the Islamic period; Arabic documents from Granada, a section in which in addition to various documents from the Chancellery of Granada, the visitor can also examine a range of both official and private documents, such as the Peace Treaty between Muhammad V of Granada and Pedro IV of Aragon (Archives of the Crown of Aragon); and A Tour of the Alhambra and Generalife, in which the monument itself is the most important exhibit. The Council of the Alhambra and Generalife has made an additional effort to mark the occasion by restoring and fitting out rooms and furnishings that are normally not open to the public and which can be visited as part of the exhibition. These include the Hall of the Beds (Sala de las Camas) in the Royal Baths and the Lower Dressing-Room (Peinador Bajo).
The exhibition, which runs until 30th March, will be open from 10:00 to 18:00. It is accompanied by a catalogue in Spanish and in English and an audio-guide service and a programme of guided visits are also available.