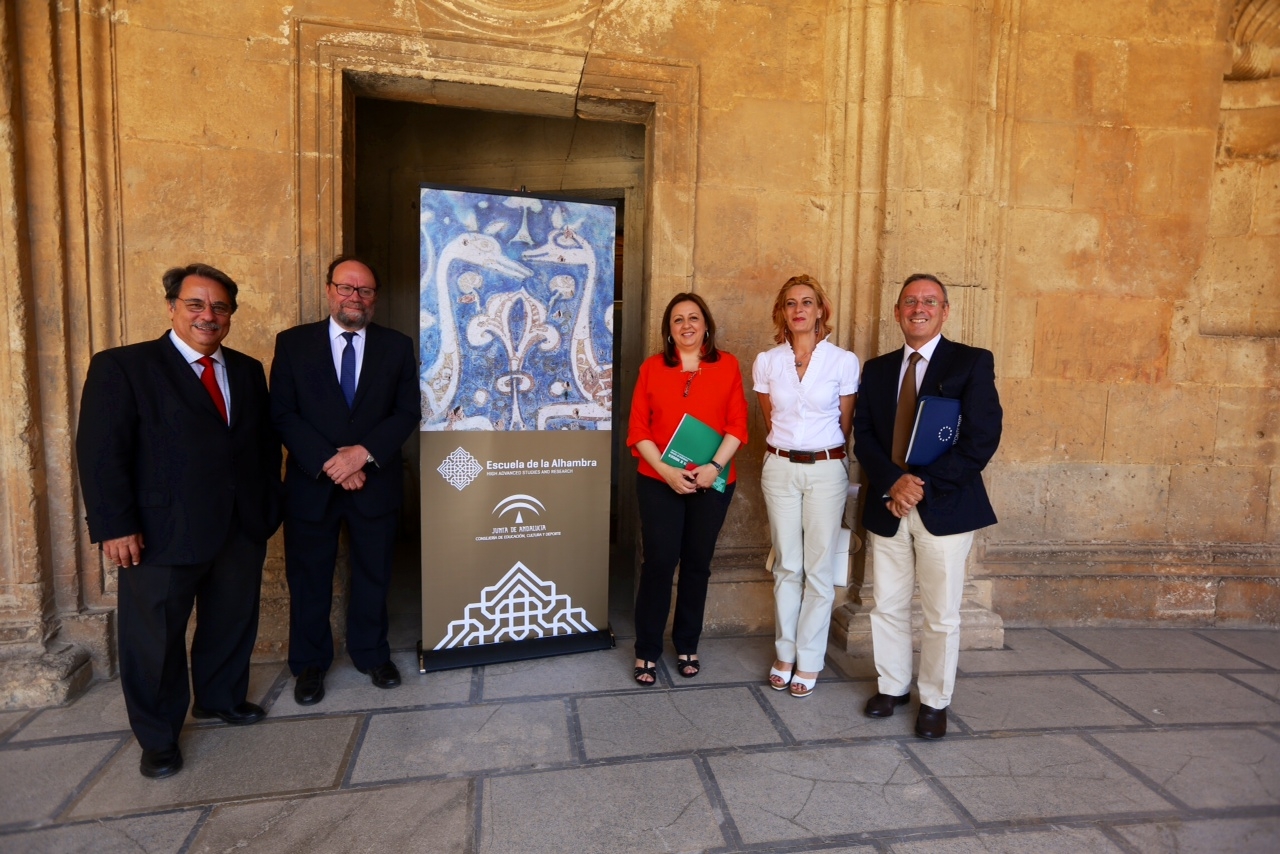 The academic life of the School of the Alhambra took another step forward this morning when the Vice-Minister of Education, Culture and Sport of the Regional Government of Andalusia, Montserrat Reyes, signed a collaboration agreement containing the legal statutes regulating the institution, together with the Rector of the  University of Granada, Francisco González Lodeiro, the Rector of the International University of Andalusia, Eugenio Domínguez Vílches; the Director of the Council of the Alhambra and Generalife, María del Mar Villafranca, and the Director of the Andalusian Historic Heritage Institute, Román Fernández-Baca.
During the signing ceremony, María del Mar Villafranca gave those present a preview of the programme for the School of the Alhambra for next year and announced that it will be offering two grants, the rules for which will be published in the Bulletin of the Regional Government of Andalusia (BOJA) and on the website www.escueladelaalhambra.es. One of the grants is to promote research and the other will be for work in the field of education and training. Each grant will be worth 18,000 euros a year and will be aimed at specialists with PhDs.
For the Vice-Minister of Education, Culture and Sport the signing of this agreement is an important step forward in the consolidation of the organizational structure of the School of the Alhambra as a centre for advanced studies and research in cultural heritage, with its headquarters in the Nasrid Group of Monuments: “With this agreement we are laying the academic foundations for an important project of the Government of Andalusia focussing on high-level training in the field of Monument and Cultural Heritage conservation”.
As regards the events due to be held at the School of the Alhambra in the coming months, one of the main features will be an International Symposium entitled “The Circular Floor-Plan in the Civil Architecture of the Renaissance. From the House of Mantegna to the Palace of Charles V”, which will be held on 9, 10 and 11 October in the Palace of Charles V and will be directed by Pedro Galera, Professor of History of Art at the University of Jaén and Sabine Frommel, Professor of History of Art of the Renaissance at the Sorbonne,.
Later on 11, 12 and 13 November, there will be an International Seminar entitled “Documents and Monuments. The Mediterranean Tradition”, which will be directed by Esther Cruces, Director of the Historical Archives of the Province of Malaga and Associate Professor at the Department of Historiographical Techniques and Sciences, Ancient History and Prehistory at the University of Malaga.
In 2015 there are plans for a photography workshop taught by the English historian, critic, writer, painter and photographer William Curtis entitled “Abstractions of the Alhambra”. Later it will be the turn of Francisco Jarauta, Professor of Philosophy and Letters at the University of Murcia, who will be guiding his students through an International Seminar on the Experience of Travel. Similarly Miguel Ángel Troitiño, Professor of Human Geography at the Complutense University of Madrid, will be coming to the School of the Alhambra to lead the Seminar entitled “Tourist load capacity and management of public visits in heritage spaces”.
Other important courses and initiatives are also planned. The School of the Alhambra and the University of Granada will be joining forces to offer a Master’s Degree in Heritage, Economic Development and Society under the supervision of the Secretary-General of the Council of the Alhambra and Generalife, Victoria Eugenia Chamorro, and the Dean of the Faculty of Labour Studies, Pedro Antonio García López.
The School of the Alhambra also plans to hold its own Master’s Degree course on the Conservation and Restoration of Hispano-Muslim heritage, which will be directed by Víctor Medina, Professor at the Department of Painting at the Faculty of Fine Arts of the University of Granada. Likewise and making the most of the resources offered by the University of Granada’s Virtual Education Centre, the School will also soon be offering a MOOC (Massive Open Online Course) entitled The Alhambra: History, Art and Heritage.
In addition, the School is considering and indeed working on the idea of organizing jointly with the UNIA a Master’s Degree in Cultural Heritage Management. This course would be aimed at the training of specialists and towards research and will be directed by Rafael López Guzmán, Professor of History of Art at the UGR.
Lastly, next September the School will be organizing together with the Andalusian Historic Heritage Institute, (AHHI) a course entitled Marketing and Heritage in which students will be learning how to use marketing and advertising in heritage communications on the basis of practical case studies. The course will also reflect on the relationship between marketing and advertising campaigns and heritage finance.
The Director of the Alhambra and Generalife said that she wanted the School to be an “international point of reference” due to its “innovative subject matter and methodology”, which will make the Alhambra a “living laboratory for Heritage research and training”.