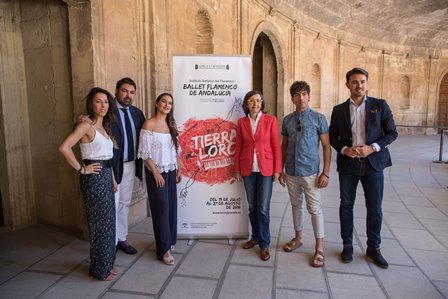 The Regional Minister of Culture pointed out that over 600,000 spectators have attended this event, which this year will be offering 30 performances between 19th July and 27th August.

The Regional Minister of Culture, Rosa Aguilar, was in Granada today to present the 15th edition of the Lorca and Granada cycle in the Generalife Gardens, which will be held from the 19th July to 27th August and in which the Ballet Flamenco de Andalucía dance company, with the special collaboration of the flamenco singer Mayte Martín and the artistic direction of Rafaela Carrasco, will be premiering their new show Tierra-Lorca. Cancionero Popular.
In her speech, Aguilar emphasized that this programme, which is now in its 15th year, “is consolidating its position in the cultural calendar of Granada and indeed of the whole of Andalucia and over the years over 600,000 people have enjoyed the shows”. Something which according to the Minister, “demonstrates the huge popularity of this programme in the city and province as well as the incredible response from all those visiting Granada and those who come here from near and far expressly to see this show”.
On this question, Aguilar pointed out that “intangible and universal heritage come together in this event and coexist over 30 nights”. “Heritage and culture are one and the same thing in Granada and this event offers people the chance to enjoy, to feel and to share emotions” she added.
Rosa Aguilar also praised the work done by the ballet company, which is funded by the Regional Ministry of Culture, “it makes us feel proud and carries the name of Andalusia far and wide across the world’s stages, always making excellence, talent and quality its hallmarks”. This year the Ballet Flamenco de Andalucía is returning to the Lorca and Granada event “to pay a well-deserved tribute once again to our most universal poet, who continues to be an ambassador for Andalusia all over the world, and to show us a Lorca who in his first years was more drawn to music than to the written word”, the Minister explained about this year’s show, which revolves around the record that Lorca made in 1931 in which he played the piano on what he called ‘Cancionero Popular’ (Collection of Spanish Popular Songs) to accompany his friend, the singer Encarnación López, La Argentinita.
Aguilar, who was accompanied on her visit to Granada today by Rafaela Carrasco and by some of the artists who will be taking part in the show, emphasized that with this new performance for the Lorca and Granada cycle “the present and immediate future of our Flamenco will be taking the stage” and she underlined that “investing in culture is investing in people and behind this show there are loads of people, many hours’ work, a lot of effort and positive commitment from the women and men of culture from more than 30 different companies”. “By holding this event year after year we are also investing in our local business people and in the companies in this sector. This event creates opportunities, culture and employment and promotes cultural tourism in Granada, all of which means economic development in this area”, the Minister concluded.
For her part, Rafaela Carrasco explained that for this year’s show they have recreated some of the songs on the record made in 1931 because “they are songs that are still relevant today, that are part of this place, of the people and which we are now recreating so as to be able to offer them to a new audience”. She also explained that “we will be approaching both the musical and choreographic sides of the show from a very modern perspective but without losing their essence, with an enormous wealth of styles and forms of expressing Flamenco”.
‘Tierra-Lorca. Cancionero Popular’
For the new show that the Ballet Flamenco de Andalucía dance company will be performing for the Lorca and Granada cycle in the Generalife Gardens, Rafaela Carrasco, the artistic director of the Ballet Flamenco de Andalucía, has created a choreography in which she re-encounters the spirit of Lorca and his popular songs. In the show Carraco, who will be taking part in this event for the second time after “En la memoria del cante: 1922”, will also be using a piano similar to the one the poet played in 1931 to record five records with 10 popular songs, with vocals by La Argentinita. In this way the El Ballet Flamenco de Andalucía will be paying tribute to Lorca’s musical universe.
Various famous flamenco singers will be taking part including Mayte Martín, Gema Caballero, Antonio Campos and Antonio Núñez El Pulga, and together with Rafaela Carrasco herself, there will be three other solo dancers, David Coria, Ana Morales and Hugo López, who will be providing the choreographies for a show in which the music will be played by Pablo Suárez, Antonio Campos and the guitarists Jesús Torres and Juan Antonio Suárez Cano.
The Ballet Flamenco de Andalucía will be doing 30 shows between 19th July and 27th August from Tuesday to Saturday at 22:00. The ticket price is 34 euros, although discounts will be available. The traditional special offer of two tickets for the price of one will be available for all Tuesday and Wednesday nights, as will the discounts for unemployed people, over 65s, students, youth card holders, tourist pass holders and visitors to the Alhambra group of monuments.
Tickets are on sale at El Corte Inglés, its website (www.elcorteingles.es) or by calling 902 400 222. If you are in Granada, you can also buy tickets at the ticket office of the Teatro Isabel La Católica (until 13 August) and at the ticket office at the entrance to the Generalife (from 18th July from 11:00 to 15:00 and from 18:00 to 22:00).
For more information please see www.lorcaygranada.es
Dossier available at: http://lajunta.es/12nxm