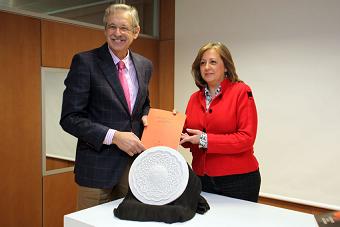 The Alhambra, present in the Museum of the new Cultural Center of CajaGRANADA Memory of Andalusia

The Alhambra will be very present in the future Museum of the new Cultural Center of CajaGRANADA Memory of Andalusia. On Monday, 23 February, the president of CajaGRANADA, Antonio Claret and the Principal of the Board of the Alhambra and the Generalife, María del Mar Villafranca, have signed an agreement of collaboration, for which the Board yields an important number of pieces for its exhibition. The collaboration between both institutions, which will be permanent, arises from a common interest for the search and selection of a few pieces that will be located in the space dedicated to the Art and Culture of Andalusia from the Prehistory up to nowadays, located in the Room 4, “Art and Culture”, concretely in the resource of the Stratum of the Memory.
This way, the Workshop of Restoration of plaster-works and tiles of the Service of Conservation of the Board of the Alhambra of Granada is reproducing several original plaster-works of the Alhambra in order to form a part of one of the sceneries of the museum.
The Museum Memory of Andalusia is divided in four spaces, one of them dedicated to the Art and Culture of Andalusia from the Prehistory to nowadays. The explanatory resource where these plaster-works will be represented is named Stratum of Memory: a great table divided in the different historical periods. Every stage of the history will be represented by the most typical material or by the technology used in its artistic production: the ceramics, for the Prehistory; the marble, for the Antique History; the polychrome wood, for the Modern History; the engraving, for the Contemporary History; the photography, for the Current History; and it is the plaster, proceeding from the city of Las Gabias, the selected one for the Medieval History.
With plaster-works reproductions of the Tower of the Ladies of the Partal, the Lounge of the Ambassadors’ Throne and the Court of Myrtles, it will be exposed in a didactic and suggestive way the artistic value of this material in the Middle Ages in Andalusia. A decorative motive with a geometric language will cover great part of the table, as they cover the enormous walls of the Alhambra. For it, pieces with a marked symbolism have been selected. By means of a strong compilation of the plasterwork, the Nasrid architect could give a great value to such a basic and elementary material as this one, dignifying it and providing it, probably, with the major brilliance inside the creations of the Muslim world.
Other fragments will serve to reveal the different types of decorations (calligraphic, geometric and vegetable), the processes of work necessary for its accomplishment, the transformations that the light of the Sun makes on these decorations, and even the importance of the epigraphy, fundamental for the transmission of the religious, political and poetical thought, this last one of great artistic value.
The selection of pieces is formed by seven different motives assembled in sixteen sets, where, under the formal beauty of the represented elements, it hides big knowledge of geometry that allowed them to realize complex developments, as base of its decorations and where immersed vegetable motives are seen. Developments and processes of execution, which will be seen reflected in the Museum of the Cultural Center CajaGRANADA Memory of Andalusia, in four of the central plates of the desk.
Thanks to the above-mentioned collaboration, it will be possible to realize also the reproduction of a fragment of one of the paintings of the cover of the Room of the Kings, as well as of a golden dinar.
Furthermore, the collaboration between CajaGRANADA and the Board of the Alhambra and the Generalife materializes in the donation of a great number of publications of its list of titles, which will form part of the Collection of the Audio-visual collection of the new Cultural Center CajaGRANADA Memory of Andalusia.
Hereby, is built a coherent and diversified Collection, specialized in the Andalusian culture, history and identity, giving response to the formative, informative and cultural needs and of also giving response to the leisure of any person who accedes to our Audio-visual collection.