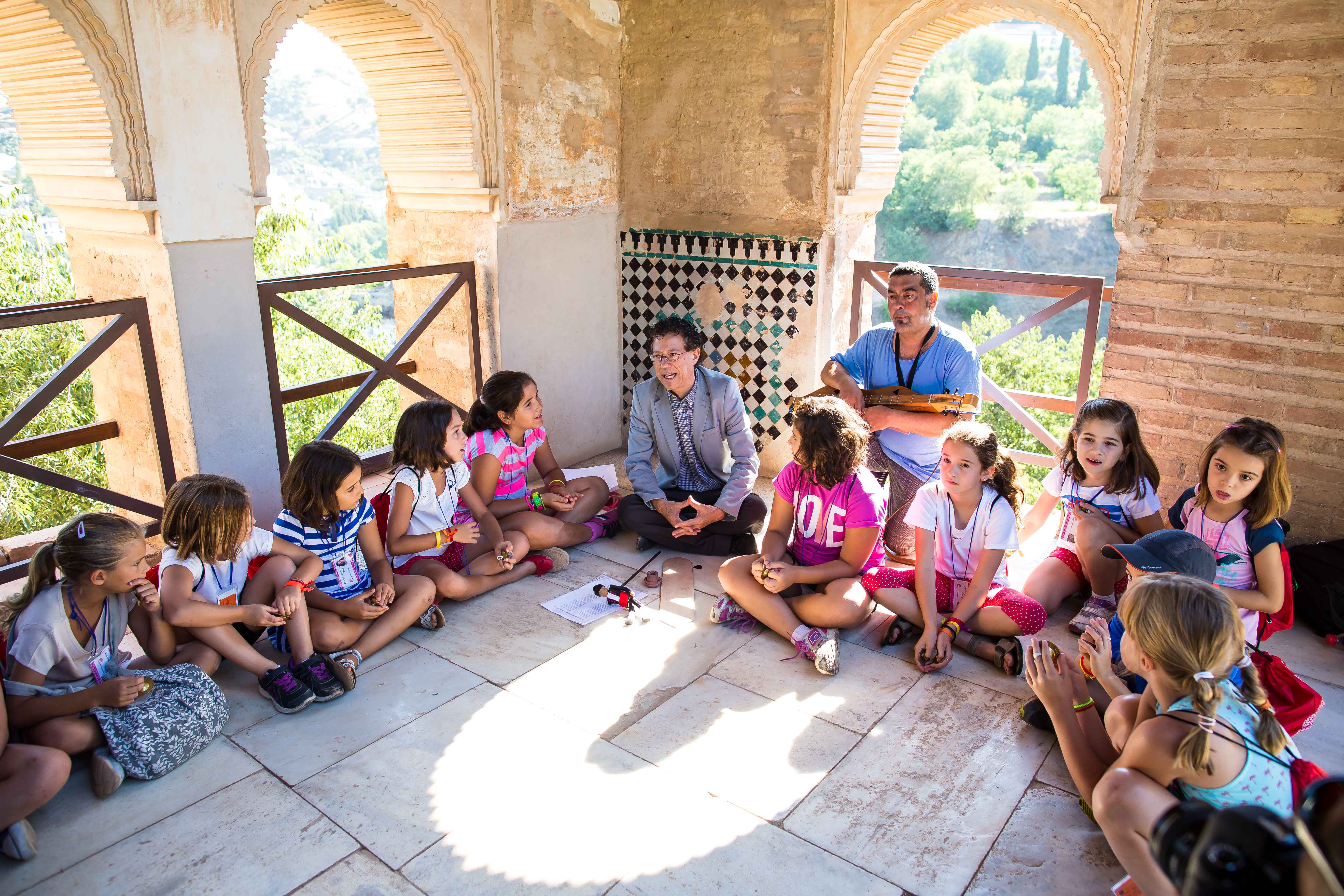 Children are the stars of the show this summer at the Alhambra in an educational activity that combines guided visits, often to areas normally closed to the public, with educational workshops in which schoolchildren from 6 to 17 years old are shown new ways of looking at their local heritage

Children are the stars of the show this summer at the Alhambra in an educational activity that combines guided visits, often to areas normally closed to the public, with educational workshops in which schoolchildren from 6 to 17 years old are shown new ways of looking at their local heritage.
This morning the new Director of the Council of the Alhambra and Generalife, Reynaldo Fernández Manzano, decided that his first public appearance as Director should be to visit the boys and girls who are enjoying a Summer in the Alhambra. He met up with the children in the Partal Gardens where he said that “The heritage experience has left its mark. Children are the future and educating them to protect is a key priority for the Council of the Alhambra. It is important that from a young age, we make children aware of the importance of looking after our heritage”.
During July, 247 schoolchildren enjoyed the educational and play activities organized at the Monument. Most were from Granada but there was also a sprinkling from other provinces of Andalusia such as Málaga, Jaén and Cádiz, cities such as Madrid and Valladolid, and others from more distant regions, such as the United States, who are temporarily resident in Granada or who use their holidays to visit relatives in the city and have signed up for this activity. A significant number of children have chosen this option for their holidays for the fourth year running.
This year the age limit for those wishing to take part was increased from 14 to 17 years old. The course, which lasts a week, runs from 8:45 to 15:15 during which time the children are guided by heritage experts, who on this occasion placed special emphasis on the fact that this year is the UNESCO International Year of Light.
The youngest children from 6 to 9 years old were in a group called the Lions, who this week visited amongst other spaces, the Nasrid Palaces, the Generalife, the Fine Arts Museum and the Medina, a bustling neighbourhood that emerged between the 13th and 15th Centuries on the Sabika hill beside the Palaces. Here the children found out about the different trades and crafts in which the ordinary people who lived in this neighbourhood worked. These visits also served as a reference for the workshops in which for example they made an oil lamp, a collection of aromatic plants and a stained glass window out of cellophane.
The Gazelles, the group aged from 10 to 13, visited all the Alhambra’s different gates, the Albercones water system, the fortification known as La Silla del Moro, the Royal Water-Channel and the Fields of the Generalife, without forgetting of course the Tower of the Peaks, the Partal Palace and the Torre de la Vela or Bell-Tower. They also visited the Carmen Blanco (White Mansion), which houses the Rodríguez-Acosta Foundation.
The oldest group from 14 to 17 years old were shown the Alhambra from several different perspectives: from the point of view of landscape, Nasrid crafts and architecture. Music was also on the agenda in a route through the Wood of the Alhambra, the Generalife, the Palace of Charles V, the Partal Palace and the Tower of the Princesses in which they discovered a variety of music from al-Andalus and flamenco. The aim of all these activities was to “raise the kids’ awareness of the importance of looking after and conserving the Alhambra, a place that retains the essence of integrity and authenticity, two fundamental principles for a Monument that is a World Heritage site” concluded Fernández Manzano.