A photographic exhibition of Oman in the Alhambra 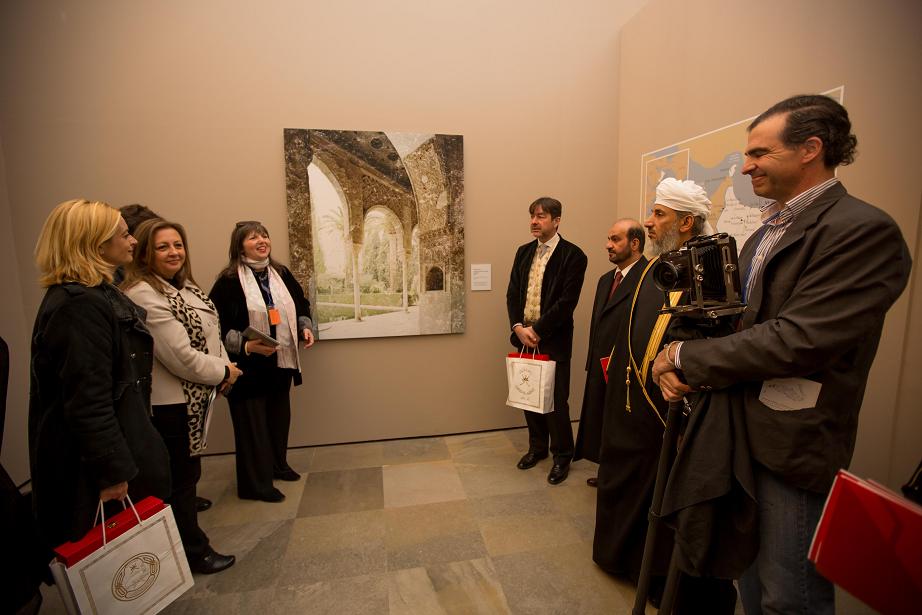 This is the first exhibition in Spain of historic images of the Sultanate of Oman. It is organized by the Euro-Arab Institute for Education and Training Foundation, with the cooperation of the Regional Ministry of Culture and Sports and the Patronato de la Alhambra y Generalife

Oman will be the leading protagonist as from today in the Alhambra. Three Views of Oman, Society and Religion 1945-2006 is the title of the photographic exhibition held in the Palace of Charles V. It is organized by the Euro-Arab Institute for Education and Training Foundation (Instea), the Ministry of Islamic Affairs (Awaqf) and Religious Affairs of the Sultanate of Oman, the Andalusian Regional Ministry of Culture and Sports, in the Museum of Fine Arts with the Patronato de la Alhambra y Generalife, together with the Institute for American Values in New York.
The general secretary for Cultural Politics of the Andalusian Regional Ministry of Culture and Sport, Montserrat Reyes, together with the director-general of the Patronato de la Alhambra y Generalife, María del Mar Villafranca, opened the exhibition this morning. It is held in the Hall of Temporary Exhibitions of the Fine Arts Museum. They were accompanied by an important delegation from the Sultanate of Oman, including the Minister for Religious Affairs, Sheikh Abdullah Bin Mohamed Al-Salimi and the ambassador for Oman in Spain, Hilal Bin Mahhoon Al-Maamari. With this exhibition, from the West, the Alhambra becomes a scene of dialogue with the Middle East through photography.
Three Views of Oman, Society and Religion 1945-2006 offers a different viewpoint on the human and geographic landscape of Oman – a country that is on the south-eastern coast of the Arabian Peninsula. This is transmitted through the lens of three photographers: Wilfred Thesiger (1910-1993), a traveller and son of a diplomat, who lived in Oman since 1945; Charles Butt (1935-2006), a civil servant of the Intelligence Service of the British Armed Forces, who later joined the army of the Sultanate of Oman in 1966, and who provided photographic reports of his stay in Oman up until 1978.  Finally, Edward Grazda (1947), who was in 2005 commissioned by the Institute for American Values to illustrate daily life in Oman.
These three outstanding points of view will allow us to have a closer approach to society in Oman in diverse historical times that happened over a period of 70 years. We can appreciate the tradition and the modernity of this country that has played an important role in commerce, diplomacy and international relations for centuries. Apart from 74 photographs comprising the exhibition, the Fine Arts Museum of Granada has included two more, taken by the Spanish photographer, Fernando Manso, with the Alhambra as protagonist and meeting point between the Arab world and the West.
Raina Sacks Blankenhorn, executive Vice President of the Institute for American Values in New York, is the curator of Three Views of Oman, Society and Religion 1945-2006, a travelling exhibition which has come to the Alhambra after St. Anthony’s College, Oxford, and London, where it has been shown in May of this year.
The Patronato de la Alhambra y Generalife and the Euro-Arab Institute for Education and Training Foundation (Instea), have cooperated in this exhibition in order to promote relationships and understanding between the Arab world and Spain, as well as to encourage dialogue and reflection.
Photo Gallery of the photo exhibition Three Views of Oman
Location: Museum of Fine Arts, Granada, Palace of Charles V. Monumental Complex of the Alhambra and Generalife.
Dates: 29 November, 2012 – 31 March, 2013