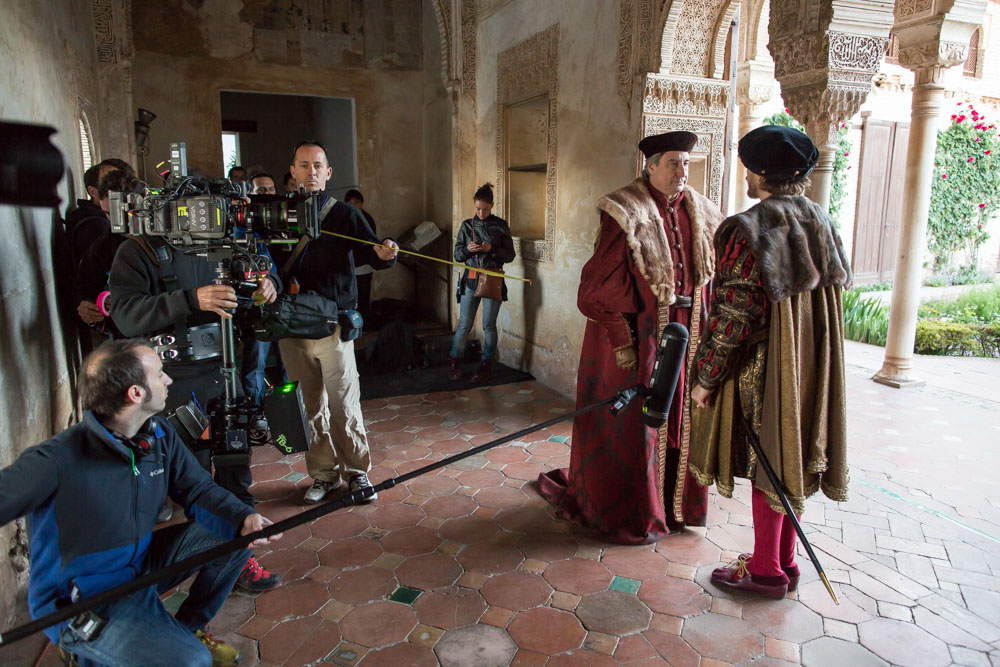 They have been taking part in the filming of Charles V, King Emperor and for two days were part of a large group of extras for the series broadcast by TVE and produced by Diagonal TV
In the blinking of an eye they have leapt back in time from the 21st-century to the Renaissance, a journey of six centuries, no less, in which they have exchanged their mobiles and jeans for swords and luxurious embroi-dered garments, pointed shoes and elegant hats. This is how the hundred ex-tras from Granada will go down in history, TV history of course, after spend-ing two days filming the series Charles V, King Emperor which is broadcast by Televisión Española and produced by Diagonal TV.
They have been getting themselves ready since five in the morning in a hotel in the centre of Granada, where a 20-strong army of make-up artists, dressmakers and stylists were waiting for them. Even the smallest detail must be taken care of, when putting on their costumes or choosing the shoes or boots that fit them best. Afterwards, a trip in the microbus to the Gate of Jus-tice where they rehearse over and over and again until 12 o’clock, before starting again in the evening in the centre of Granada.
Some of the extras such as Carmen Beatriz, a sixth form student from Albolote, were lucky enough to be offered a worthwhile role in the series. She was one of the ladies-in-waiting of the Empress Isabel of Portugal (Blanca Suárez). Over the last two days she has found out at first hand how difficult the life of an actor can be, the long shooting sessions, the cold, the heat … “But it has been worth it in spite of everything” the young talent said. “I have been studying acting for a long time and when they selected me for the role, I couldn’t believe it. It was incredible”.
Macarena is 23. She has finished her teacher training course and is cur-rently unemployed, as is Alba, who is 30. Their roles could not have been more contrasting. Joy at taking part in a special moment in history, reliving the wedding of the Emperor Charles V and Isabel of Portugal in the Qubba of the Cuarto Real de Santo Domingo; and sadness at the death of Isabel of Por-tugal. “We liked being ladies-in-waiting best. We can’t move in these mourn-ing outfits, we feel like mummies”.
The decisions to cast José Miguel (16 years old) and Iván (17) as village men, and Javi (17) as a nobleman from Seville were based above all on their haircuts. The casting director, Carmen Vázquez, said that “The current fash-ion for toupee hairstyles has been a real headache for us. It has been difficult to find people who looked the part. We had to get a lot of people to wear hats to cover up their toupees. But what can you do? Fashion is fashion!”.
Santiago, who plays the role of a Portuguese nobleman, is an unem-ployed photographer. This is not the first time he has been on a film set. A few weeks ago he was selected for a scene in El Príncipe (the Prince) and won-dered perhaps whether he had found his true vocation. “I can see myself in Hollywood”, he exclaimed between takes.
Marian Riñones, President of the Asociación El Palenque from Laredo (Cantabria) had to “pinch herself to make sure she wasn’t dreaming”. For over 15 years they have enjoyed teaching others about 16th century culture in a fun way, above all by recreating the disembarking of Charles V in their home town. “After doing so much reading and researching, we just couldn’t believe that this moment in history was being played out in front of us. I thought I was dreaming”. Marian’s “minute of fame” is guaranteed as she appears as a witness at the wedding of Charles V and Isabel of Portugal.
Who knows if any of the extras who have been reliving Charles V’s stay in the Alhambra and Granada may someday make that “great leap to fame”.
For more information, please visit www.alhambra-patronato.es