Three fragments of an alfiz 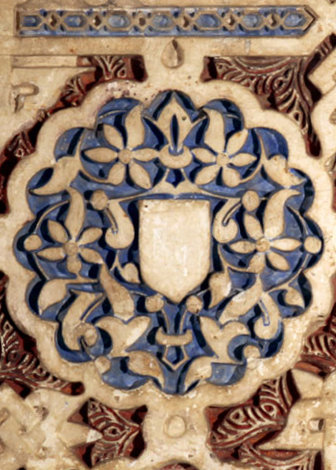 Although it is known to have been used in the Umayyad period, it was during the period of the taifas when the technique reached its greatest heights...

July’s Museum Piece of the Month consists of three fragments of an alfiz, an ornamental moulding, normally used to frame an arch. Every Saturday in July, from noon onwards, art historian José Domingo Lentisco will analyse the fragments in Room VII of the Museum of the Alhambra, as part of a free programme offered by Patronato de la Alhambra and Generalife.

The use of plasterwork as a decorative element is not confined to the Islamic world, and was extended in Hellenistic Greece, in Rome and throughout the Sassanid Empire (Persia). The Umayyads and the Abbasids also used plaster for decorative purposes, the latter making significant developments in techniques and decorative motifs.

The use of plasterwork did not become extended throughout al-Andalus until the 10th or 11th centuries. Although it is known to have been used in the Umayyad period, it was during the period of the taifas when the technique reached its greatest heights.

Plaster mouldings of this type are the culmination of an evolutional process in al-Andalus, reaching its greatest expression in the Nasrid Kingdom of Granada.

These fragments are of particular historic and artistic interest. First of all, we know where they come from – they decorated closets in the Bayt al-Sultan room, or Sala de la Barca, in Alhambra’s Comares Palace. Secondly, their inscriptions depict the remaining verses of the poems contained in the diwan, or poetry collection, of Ibn Zamrak. The importance of these verses and, by extension, these fragments of plasterwork, has been analysed by Antonio Fernández-Puertas, Professor of History of Muslim Art at the University of Granada.

The activity will focus on these objects, now kept in the Museum of the Alhambra, exploring the techniques and decorative motifs used and analysing the meanings of the poems in the context of their original location.

When: Saturdays (July), noon
Where: Room VII, Museum of the Alhambra, Palace of Carlos V

INDICACIONES
Although it is known to have been used in the Umayyad period, it was during the period of the taifas when the technique reached its greatest heights...