The foundation stone of Granada’s maristan 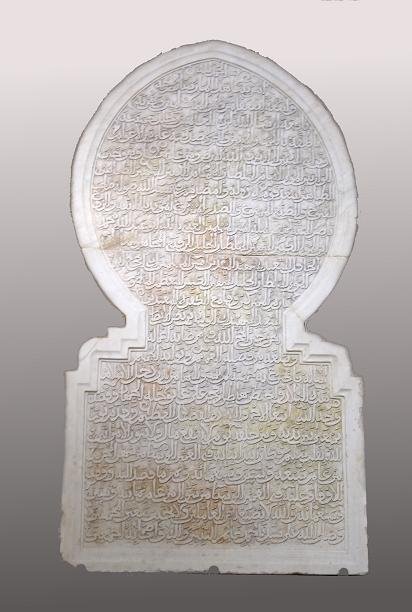 May’s Museum Piece of the Month is the foundation stone of Granada’s maristan, or hospital. Every Saturday in May, from noon onwards, Semitologist (Arabic) Mariana Kalaitzidou will analyse the piece in Room IV of the Museum of the Alhambra, as part of a free programme offered by Patronato de la Alhambra and Generalife.

Granada’s maristan, or hospital, was founded during the second sultanate of Muhammad V, who reigned from 1354 to 1359 and from 1362 to 1391. The foundation stone, apart from being very beautiful in itself, offers important information about the building, such as the date construction commenced (1365-67) and for whom the maristan was intended, and about its founder, such as his genealogy, among other details of interest.

Granada’s maristan was one of the first hospitals built on the Iberian Peninsula and, though now in ruins, was particularly important in its time, as we know from the epigraphs on the foundation stone.

The session will take a close look at the details of the stone, including the inscription, in the context of Nasrid epigraphic texts, particularly those inscribed on other foundation stones. The text will be translated and all relevant information analysed in detail. The talks will also offer information on this type of civic institution in al Andalus, for a better understanding of their main functions.

When: Saturdays (May), noon
Where: Room IV, Museum of the Alhambra, Palace of Carlos V