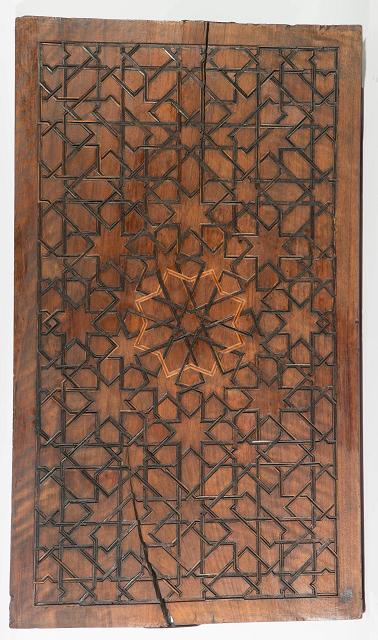 This piece, together with its partner, conserved in situ, can be considered as the only known examples of this style of architectural decoration...

The Patronato de la Alhambra y Generalife announces the Piece of the Month, the ceiling of the niche at the entrance to the Patronato de la Alhambra y Generalife. Those who are interested in participating in this free programme, that will take place from 12 a.m. on the second, third and fourth Saturday of November, may go to Hall V of the Museum of the Alhambra. There María del Carmen López Pertíñez, doctor of Art History, will explain the details of this unique piece.

The ceiling of one of the niches in the archway giving access to the Comares Hall has been kept in the Museum of the Alhambra ever since this was established. This piece, together with its partner, conserved in situ, can be considered as the only known examples of this style of architectural decoration.

Although it is just a board with a carved geometric pattern, it is still interesting both because of its exclusive typology and because of the specific technique with which the geometrical strokes are outlined, playing with the woods of different colours and textures as though it were marquetry.

The exhibition of the characteristics of this piece allows us to insist on its context.  This is a review of the internal cladding presented by the niches in the Alhambra, the variation in materials used, and the treatment of them and of the remains that exist at present. So it will be possible to deduce the aspects of some of the lost pieces.

The niches, together with the spaces for cupboards, are blind openings in the walls, particularly associated with constructions from the Nasrid period.

The niches that were designed and carried out on the width of the jambs of the doors or openings giving access to the main rooms of the houses were particularly profuse in the Alhambra. This was due to the obvious magnificence of the palaces.

As well as being an element with its own decoration that is integrated into the panels covering the jambs, because of their projection into the inside, they provide specific data regarding the interpretation of archaeological or architectural remains of this type of structure.
When: Second, third and fourth Saturday of the month, noon
Where: Room V, Museum of the Alhambra, Palace of Carlos V

INDICACIONES
This piece, together with its partner, conserved in situ, can be considered as the only known examples of this style of architectural decoration...