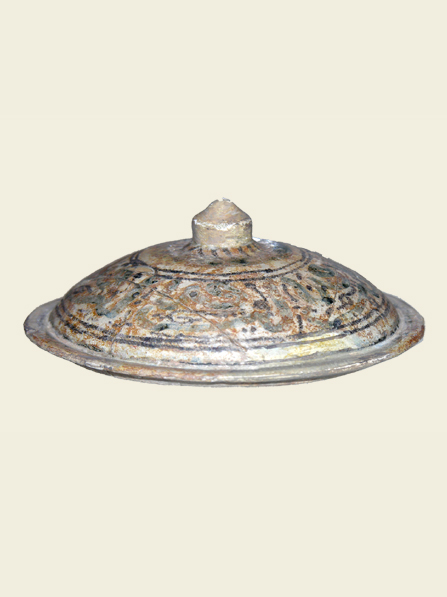 August’s Museum Piece of the Month centres on Nasrid domestic ceramics and the messages they contain. Every Saturday in August, from noon onwards, art historian Gaspar Aranda will analyse this fascinating subject in Room VI of the Museum of the Alhambra, as part of this free programme offered by Patronato de la Alhambra y Generalife (PAG).
Taking a small ceramic lid found in the Alhambra as a starting point, Aranda will show how the ceramics of the Nasrid period transmit a series of messages, both functional (what they were, how they were made, what they were used for) and symbolic (the value they held). The study and interpretation of these messages opens up a dialogue with those who made and used them, giving us a greater insight into the life and customs of Nasrid society.
Their functional messages stem from the creative imagination, technical skill and manual dexterity of their makers, and the ceramics reveal what they are through technological aspects such as the selection and preparation of the clay, the makeup of the pieces, their firing and their decorative techniques, as well as through their formal aspects, such as morphological types– ataifores (dishes), zafas (bowls), jugs, jars, lids, etc., the proportion and harmony of their parts and their decorative motifs (geometric, plant, epigraphic, figurative, etc.)
The symbolic messages transmitted by the pieces are inherent in their beauty, quality and decoration, among other aspects. Out of the interrelation between clay, shape, technique and decoration are born pieces which are considered luxury, everyday, refined or elegant. Famously, in Nasrid ceramic ware, this interrelation results in pieces that are, on the one hand, highly practical for the domestic tasks for which they were made – kitchenware, tableware, etc., and at the same time of immense aesthetic value, not just in their surface decoration but also in their concept of form and proportion.
When: Every Saturday in May, from 12.00 noon onwards.
Where: Room VI, Museum of the Alhambra, Palace of Carlos V.