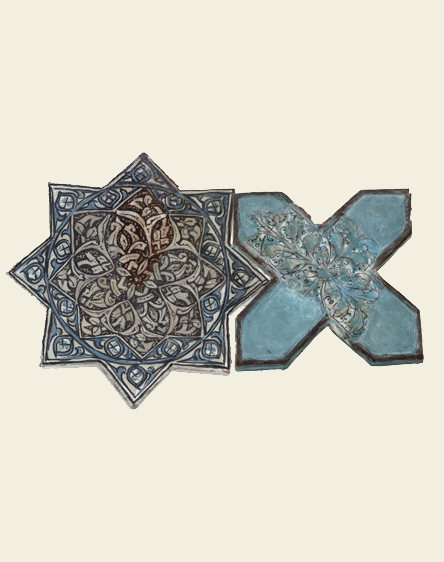 The technique was the most complex and costly process used in Islamic pottery...

March’s Museum Piece of the Month is a Lajvard tile from the Ilkhanid dynasty. Every Saturday in March, from noon onwards, Art Historian Gaspar Aranda will analyse the piece in Room VII of the Alhambra Museum, as part of a free programme offered by Patronato de la Alhambra y Generalife (PAG).

This wall tile was decorated using a technique known as Lajvard or Lajvardina (from the Farsi word for “lapis lazuli”). The technique was not used in Hispano-Islamic ceramics and was the most complex and costly process used in Islamic pottery. The piece originally formed part of a panel of star and cross-shaped tiles in an Iranian building of the Mongol Ilkhanid dynasty (1256-1336).

We can trace the steps involved in the decorative process by means of a direct analysis of the piece. The most apparent aspects of the tile are its thinness (1.6 cm), its cross shape (with arms damaged and restored), the slight border on the front, and the decoration on the surface, in low relief with four stems with leaves laid out in a cross shape from the centre to the ends of the arms. This indicates that a mould was used to obtain the shape and decoration, as has been verified in other similar tiles.
The surface of the piece is covered in a turquoise glaze, on top of which are painted the profiles of the cross and the plant motives in red enamel, and the fine sinuous stems and small curved lines and dots in the intermediate spaces in black enamel. Finally, the centres of the stems and leaves were decorated in gold leaf (now lost).

The technique involved two firings in the kiln – the first, at the hottest temperature, to set the siliceous clay and vitrify the turquoise glaze, ensuring its adherence, and a second, to adhere the enamel to the glaze.

To the south east of lake Urmia in Azerbaijan, King Abaqa (1265-1282) laid out the richly-decorated palace of Takht-i Sulaiman, with panels of cross and star-shaped tiles decorated in the Lajvardin technique, alternating dark blue and turquoise blue tiles. The turquoise coloured cross-shaped tiles share the same form and technique as the tile now in the Museum of the Alhambra. Such brightly glazed and gilded tiles must have dazzled visitors to the palace.

When: Saturdays (March), noon
Where: Room VII, Museum of the Alhambra, Palace of Carlos V

INDICACIONES
The technique was the most complex and costly process used in Islamic pottery...